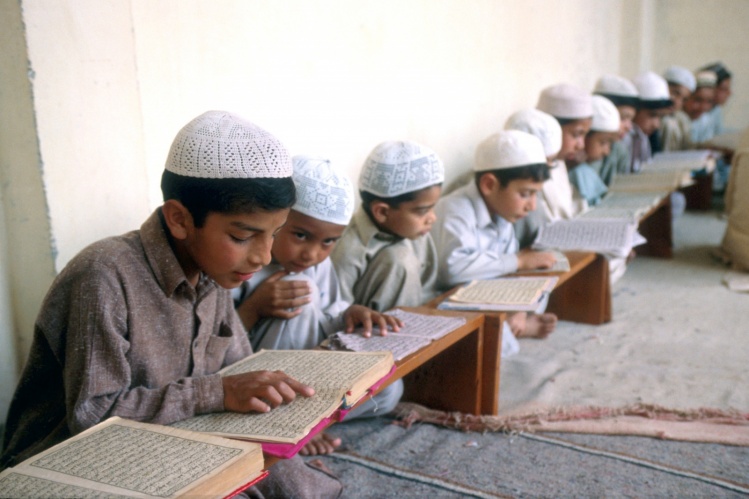 Many years ago, when I was taking a graduate course on Buddhism, the Japanese-born professor recommended that we read three books written in French by a non-specialist who had no training in languages of the Buddhist world. Those three books were all written by the Jesuit Henri de Lubac and published during the 1950s when de Lubac had been forbidden by Jesuit superiors, under pressure from the papacy’s Holy Office, to publish anything further on Christian theology. The Japanese professor considered de Lubac’s insights into the Buddhist tradition deeply important. I thought of this recommendation by my former professor when I plunged into the reflections on the Qur’an by the prolific historian and Catholic intellectual Garry Wills. Once a conservative political pundit but a convert during the Nixon era to more liberal and even radical political views, Wills, who was once a Jesuit seminarian himself, has increasingly taken to theological themes in his late and continuing literary career.

Having run the gamut of New Testament theology from What Jesus Meant to What Paul Meant to What the Gospels Meant, all published in quick succession a decade ago—to say nothing of his six books on Saint Augustine—Wills has now turned his attention to Islam, whose holy book is written in Arabic, a language he has never studied. Not entirely unlike de Lubac, Wills brings a freshness of insight to the Qur’an, and especially to its imagery, that astounds the scholar long used to poring over these texts in the original. There are few better chapters in this book than the one misleadingly titled “A Desert Book.” I was at first put off by that nomenclature, more redolent of Lawrence of Arabia than of the merchant from Mecca who was to become God’s messenger. But the chapter is a sensitive meditation on the water imagery in the Qur’an. For anyone who reads the Qur’an, even in translation, Wills evokes elegantly the Quranic vision of “heaven...[as] the oasis of oases, rinsed with sweet waters, with rivers running on it and under it, and with springs opening unbidden.” Even the rhythm of that description catches something about the Qur’an that more scholarly treatments do not.

This book opens with an introduction where Wills speaks frankly of what he calls “My Qur’an Problem.” A scholar of Greek and Latin literature by training, Wills has to rely on the translations of others for the Qur’an. He quotes the Qur’an in English in the 2010 revised translation produced for Oxford World Classics by M.A.S. Abdel Haleem, an Egyptian who teaches at the University of London’s School of Oriental and African Studies. Wills is also much indebted to the commentary and appended essays in The Study Quran: A New Translation and Commentary (HarperOne). Although he does not quote its translation, Wills relies a great deal on the explanations of texts and topics written by some of its chief editors, especially Caner K. Dagli, Maria Massi Dakake, and Joseph E. B. Lumbard.

For reasons that escape me, Wills differs from both of those scholarly translations by frequently (but not always) using the transliterated Arabic “Allah” for “God.” The Malaysian government has fallen into the same mistake, insisting that Malaysian Christians writing in the Malay language not use in print the only word in Malay for God, “Allah.” The word “Allah” was used by Arab Christians, as were its homonyms in Aramaic and Syriac, for centuries before Muhammad experienced the revelation of the Qur’an. Its use by Wills gives the unfortunate sense that Muslims worship a divinity other than the God worshiped by Jews and Christians. Wills is no Islamophobe, nor does he mean to separate the God of the Qur’an from God of the Bible, but he has fallen into the trap set by Islam-bashers and also by extremist Wahhabi religious scholars trained in Saudi Arabia who venture into the English-speaking world denouncing “God” as an inadequate, indeed polytheistic rendition of “Allah.”

Despite the many highpoints of Wills’s essay, there are some blemishes.
sharetweet

For one (like me) who was out of the United States during the second Iraq war that commenced in 2003, the three chapters that precede the treatment of the Qur’an can prove useful as exposés of the many mistakes made by the George W. Bush administration in initiating that conflict. It was revealing to learn that the Bush family and their courtiers had been intent on removing Saddam Hussein from power as early as 1997, four years before the appalling events of 9/11. Those events, as it turned out, had absolutely no connection with Iraq or its government. For readers who lived through that era day by day and recognized the disaster that resulted from it, it might be just as well to skip Chapters 1–3 and get on to Wills’s reflections on the translated text of the Qur’an.

Chapters 4–13 treat the Qur’an by topics and the treatment is often enlightening. For God, according to Wills, “the real meaning of creating is communicating.... God speaks a special language, in which mountains and winds and springs are the syllables.” In the process of discussing human origins, Wills maintains that Adam and Eve are equals in the Qur’an but Eve is subordinated in the Book of Genesis. Both versions of the creation of man and woman in Genesis are actually egalitarian, despite later scriptural and homiletic misuse. In Genesis 1:27, the Priestly account, we are told that “God created humankind (ha-adam) in [God’s] image; in the image of God [God] created them; male and female [God] created them.” In Genesis 2:22, the Yahwistic creation account, the Lord creates Adam’s partner not from clay (adamah) but from Adam. Thus, our forefather could finally be matched not with animals he could name, but with a female partner who is already named, presumably by the Lord, Woman (ishshah), precisely because she was made out of Man (ish). Could it be that in some sense the clay-made person is actually inferior to the Man-made person, at least until the serpent gets to work? The female person made out of the male person is named Eve—and named not by God but by Adam—only after the consumption of the fruit that makes all of us know-it-alls (Genesis 3:20).

Despite the many highpoints of Wills’s essay, there are some blemishes. The late Patricia Crone, a Danish scholar of early Islam at Princeton not known for her easy acceptance of Muslim versions of the historical origins of their faith tradition, is called an “Islamist,” a term usually reserved today for Wahhabis and similar narrow-interpretation Muslims. Just as Wills would prefer to be called a classicist and not a classist, those of us who study Islam in the English-speaking world prefer to be called Islamicists and not Islamists. There is also no such thing as “the Hijra pilgrimage”; the phrase Wills wants is “the hajj pilgrimage.” Zaynab, the wife of Muhammad’s freedman Zayd, whom Muhammad eventually took as one of his wives, not without controversy, is mistakenly identified as Zayda. That makes poor Zayd and his ex-wife sound something like Papageno and Papagena in The Magic Flute. It is a mistake to claim that “Muslims may marry Jews or Christians without compromising the religion of any of the parties.” What Wills means is that Muslim men may marry Jews or Christians; the same is not true of Muslim women.

In a time in which the Trump administration is banking on Islamophobia to keep itself in power, no matter how many idiocies it commits, Wills’s book is an intelligent attempt to rescue the sacred scripture of the world’s more than 1 billion Muslims from the hate merchants in Washington.