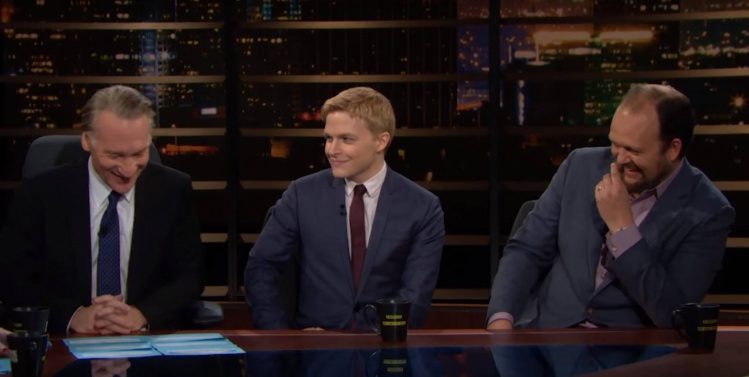 New York Times columnist Ross Douthat was on HBO’s Real Time with Bill Maher last week to hawk his new book, To Change the Church: Pope Francis and the Future of Catholicism. Maher was raised Catholic, but is a notorious “Know Nothing” when it comes to religion, and a fervent apostle for the sexual revolution of the 1960s, having apparently suffered the torments of sexual repression in suburban New Jersey in his youth. He’s an equal mocker of liberal and conservative pieties, and can be very funny, if you are not squeamish about sexual vulgarity or “politically incorrect” jokes. He is a fierce critic of Trump and Republicans, but also champions iconoclastic conservatives such as Jordan Peterson, Bret Stephens, Erick Erickson, and Mona Charen. He advertises himself as “fearless,” which in many ways he is.

But not when it comes to religion, and especially to Catholicism. On that score he is as clichéd and tedious as the average village atheist.

He interviewed Douthat toward the end of the show, after his discussion with his guest panel. That roster of sages featured John Podhoretz, the smug and unflappable editor of Commentary, Ian Bremmer, founder of something called the Eurasia Group, and journalist Ana Marie Cox, founder of the political blog Wonkette.

Maher began his interview with Douthat by quoting a scathing column Douthat wrote on the occasion of Hugh Hefner’s death. Hefner, the sybaritic founding editor of Playboy who spent his life railing against the allegedly stifling sexual conventions of middle-class American life in the 1950s—a period idealized by Douthat—was a friend of Maher’s. He contested many of the claims Douthat made about Hefner’s malign influence on American culture, which Douthat for the most part deftly parried. He was assisted in that regard by Cox, who reminded Maher that posing nude for Playboy was not necessarily the liberation women were hoping for. Douthat insisted that Hefner was a “pornographer,” to which Maher lamely suggested that Playboy centerfolds are artful depictions of a natural beauty “God” created, and nothing to be scandalized about. He was reminded that Hefner had a well-documented history of sexual harassment and coercion, something Maher claimed to be ignorant of.

The conversation then turned to religion generally and the Catholic Church more specifically. Maher, who did a debunking documentary titled Religulous about the supposedly absurd claims of all religions, insisted that those high up in the church know the Christian “stories” are “bullshit,” and only repeat them because they think the masses would be lost without the guiding hand of the hierarchy. (When was the last time the hierarchy was able to guide the masses?) Also, Maher claimed, the pope knows the Vatican is just a “gay lobby.”

After that enlightening exchange, Maher turned to Douthat’s book, and asked why Douthat thought prohibiting those who have remarried without an annulment from receiving Communion was important. As you might imagine, this exchange became entangled in a number of esoteric distinctions about Catholic teachings that quickly descended into amused incomprehension on Maher’s part and ironic bemusement from Douthat. Ana Marie Cox got to the heart of the issue, however, when she proposed that it hardly seemed like good salesmanship for Catholicism to impose more rules on its members, let alone on prospective members. Maher eagerly embraced this seemingly commonsensical observation, proclaiming that Catholicism had lost “market share” big time, and that there was no prospect of its popularity returning. Religion is an anachronism, destined for the dustbin of history. Why? Because it is four hundred years after the Scientific Revolution, and science now has all the answers to the questions religion once pretended to answer.

I would venture to say that Maher knows about as much about science as I do, meaning not nearly as much as we should. What Maher does not seem to know is that most historians of science acknowledge that it was Christianity’s insistence that the universe is comprehensible—comprehensible precisely because it was created by a rational God—that forged the philosophical premises on which modern science was built.

Plenty of scientists are religious believers, and few theologians would suggest that the Bible contains answers to strictly scientific questions.
sharetweet

Plenty of scientists are religious believers, and few theologians would suggest that the Bible contains answers to strictly scientific questions.

Podhoretz then took up the question of market share, coming to Douthat’s defense of strict religious rules. Changing the traditional teachings of a religion will likely alienate those “customers” who now embrace the rules. If Maher decided to change his HBO show in the hopes of attracting more viewers, Podhoretz explained, he would likely lose his loyal fan base.

This explanation seems superficially plausible, but falls apart on a moment’s reflection. When it comes to market share, every business leader knows that companies die if they don’t respond to the changing needs of their patrons. Most products have a limited shelf life. Think of all the giants of U.S. commerce who are no longer with us or are only a shell of their former selves, like Time Inc., Sears, Dell, Eastman Kodak, and Toys “R” Us. Besides, when it comes to the market-share analogy, religion eludes such a reductive and materialistic analysis. Historically, religion has survived or “transcended” every sort of economic system. Religion, one imagines, satisfies a number of human needs—the meaning of suffering, death, sacrifice, love, and beauty—that economic thinking cannot. The wisdom of the marketplace is now the God many people worship (Trump is a kind of high priest of the cult), but it is only the latest incarnation of Moloch. “Whoever dies with the most toys wins,” is neither true nor any comfort on one’s deathbed. Or in the birthing room, for that matter.

I have been critical of Douthat’s highly romanticized view of the church, but I do admire his willingness to put forward a rather unvarnished version of his faith in a public square that is remarkably hostile and poorly informed about the church. When he is defending Catholicism against the attacks of scoffers like Maher, I feel he is defending my beliefs as well.