Much is being made of rumors that the Vatican will soon issue a decree mandating that the priest celebrate the Mass ad orientem (“toward the East” and, presumably, with his back to the people). I would like to support that, but only if we take the spirit of the proposal seriously and follow through completely with what the supporting arguments actually require.

There are two basic arguments in support of the priest praying ad orientem. The first is historical: there is considerable documentary evidence (nicely summarized in John Baldovin’s Reforming the Liturgy: A Response to the Critics) that this was the dominant, though not exclusive, orientation of the priest in the church’s ancient worship. The second argument is liturgical: this reorientation would help recover the eschatological focus of the worshiping community as all pray in anticipation of the final coming of Christ. Worship ad orientem would remind us that the act of worship is not a closed conversation (the former Cardinal Joseph Ratzinger had complained of a “closed circle”) between presbyter and assembly; it is a shared conversation between the whole assembly, including the presbyter, and God. This change would also counteract the tendency in some worshiping communities for the presbyter to be the focus of attention.

But the general thrust of these arguments suggests that a reorientation of the priest does not go far enough. The primary concern of the early church was the orientation of the entire worshiping community, priest and people. Both priest and people, in early church practice, were gathered at the altar praying “in hope for the coming of our savior.” The ancient pattern of worship was eschatological in nature but it was also ecclesial in form—that is, it was the worship of the whole community of the faithful. We must ensure that in recovering one neglected dimension of Christian worship (the eschatological focus) we do not diminish another dimension (the communal worship of priest and people). If we are truly intent on recovering the ancient eschatological orientation of our worship, by all means let the priest face the East—but let the people process with him to the altar! The same fidelity to our ancient tradition that calls for the priest to face east also requires that we remove both pews and altar rails (much later additions to church architecture). Let us return to the practice reflected in some of the early Syrian churches, where, according to the great liturgical scholar Louis Bouyer, priest and people processed together from the ambo (situated in the center of the nave) to the altar located in the apse.

This second change, allowing the assembly to process with the clergy, is as necessary as the first (reorientation of the priest) if we are truly committed to recovering the theology and practice of the early church. For we must be clear about this: If we restore the ancient practice of the priest praying ad orientem but keep the rest of the assembly fenced off at a distance—stationary in their pews—we will not be returning to the practice and understanding of ancient Christianity. We will be returning to the practice and liturgical assumptions of baroque Catholicism in which it was the priest who “said” the Mass and the people who knelt at a distance, little more than pious spectators. My suspicion is that for too many proponents of worship ad orientem that is precisely the intention. But if what we seek is a liturgical reform motivated by a genuine ressourcement—a recovery of the understanding and practice of the early church—then by all means, let the priest pray facing the East, and let the people join him!

Richard R. Gaillardetz is the Joseph Professor of Catholic Systematic Theology at Boston College. His books include: Keys to the Council:  Unlocking the Teaching of Vatican II (co-authored with Catherine Clifford, Liturgical Press, 2012), When the Magisterium Intervenes (editor, Liturgical Press, 2012), Ecclesiology for a Global Church:  A People Called and Sent (Orbis, 2008) and The Church in the Making (Paulist, 2006). 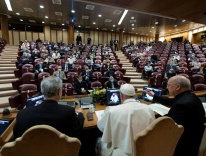 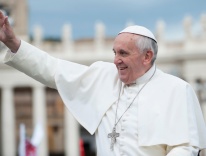 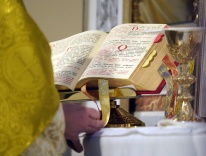