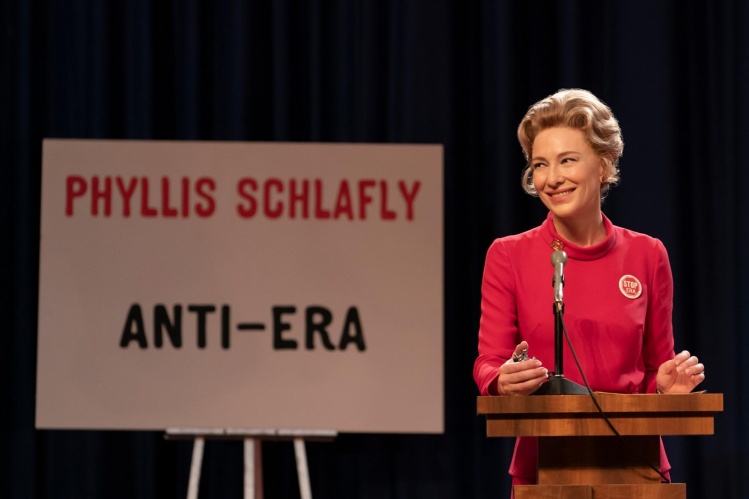 When Cate Blanchett as the conservative activist Phyllis Schlafly in the FX-Hulu series Mrs. America gives her first speech against the Equal Rights Amendment in 1971, it seems almost by accident. Speaking at a luncheon of the Daughters of the American Revolution, she abandons her usual topic of defense spending to focus on a subject which up until then had been bipartisan and comparatively bland. The ERA, a constitutional amendment which would guarantee equality between the sexes, had just been passed by the House of Representatives, received an endorsement from a Republican president, and was on its way to ratification by the states. After the passage of the Civil Rights Act and Title IX as well as Supreme Court decisions that prohibited hiring discrimination, many saw ERA ratification as more symbolic than substantial, codifying legal protections that had already been created over the past decade.

But Schlafly sensed an opportunity. “They want to use our miraculous constitution to create a sex-neutral society through the so-called Equal Rights Amendment,” she forewarns, testing out the inflammatory rhetoric that over the next decade would help ignite the culture wars. The ERA would lead to the drafting of women into combat, she said, as well as the end of alimony, unisex bathrooms, homosexuals out of the closet, and worst of all, men taking care of children.

Despite certain mischaracterizations of Schlafly’s personal life, Mrs. America succeeds enormously in revealing the religious and cultural assumptions that compelled her to cling to a sanitized vision of the past. As a polemicist who both resisted the machinations of the Republican Party and sought validation by its conservative wing, Schlafly—with the permission of her husband—played on the middle-class housewife’s fears about the uncertainty posed by new freedoms in the workplace and in society at large. Blanchett completely inhabits her character, from the baronial cadence and permanently ensconced smile to sometimes unexpected moments of vulnerability. The rest of the cast is equally effective and affecting, including Schlafly’s close friend Alice Macray (Sarah Paulson), who has a crisis of conscience and joins Marxist lesbians in a marijuana-induced sing-along of “This Land Is Your Land” at the 1977 National Women’s Conference, and Republican ERA supporter Jill Ruckelshaus (Elizabeth Banks) who watches her GOP, and her identity, slip out from under her.

The show has been skewered in the conservative press. Commentary’s Christine Rosen bemoaned the representation of Schlafly’s character “as icy, Stepford-like, and instrumental in her connection with other women, navigating a world of pastel dresses and appropriate chit chat like a seasoned politician rather than an empathetic friend.” Abigail Shrier (who has a forthcoming book on “the transgender craze”) wrote an op-ed in the Wall Street Journal complaining that “there is no factual basis for the show’s assertions that Schlafly at any point cultivated racist supporters, that she and her husband shared an envy-plagued or sexually dysfunctional relationship, that she invented case law or deployed ad hominem arguments to win debates.” In a blitz of interviews for Elle, Vanity Fair, and the Washington Times, Schlafly’s daughter Anne Schlafly Cori criticized the show’s portrayal of her parents’ relationship, and its omission of religion as central to her worldview.

The show’s creator and former Mad Men producer Dahvi Waller said she didn’t interview any of the characters’ family members so as to reproduce fact as a biopic; instead, she chose to create a panoptic piece of art, which took liberty with subjective memory and private life: “I wanted to write the show from multiple points of view and be in different perspectives from episode to episode. I felt if I sat down and talked to anyone, I was beholden to their version of events.” Waller spent two years engaged in archival research and even hired Schlafly biographer Carol Felsenthal as a consultant for the show. In almost every frame, one can see the attention the creators invested in bringing the period to life, and they invite the viewer to relish its peculiarities: the frequent and unironic use of the words brother, sister, and comrade; Betty Friedan’s leather dresses; and how uncharismatic George McGovern really was.

But this strategy of ducking behind the books rather than listening to firsthand witnesses has its limits.
sharetweet

But this strategy of ducking behind the books rather than listening to firsthand witnesses has its limits. Alice Macray is an entirely fictional creation, as is, in a sense, sister-in-law Eleanor Schlafly as the character is played by Jeanne Tripplehorn. Portrayed as a middle-aged spinster deflated at not finding a husband, she is subject to Phyllis’s whims of affection or attacks brought on by being too close to the family. Mrs. America depicts her filling in at home while Phyllis travels to give lectures and organize. Yet in reality, Eleanor Schlafly was just as active as Phyllis in the conservative grassroots movement; she was president of the Catholic, anti-Communist Cardinal Mindszenty Foundation, and a formidable presence on the St. Louis social scene. For a TV show that tackles one of the most polarizing periods in late twentieth-century America, it’s an open question whether this creative approach to character development was such a good idea, given the right wing’s preternatural suspicions of Hollywood.

This dilemma is best illustrated in the show’s portrayal of racism and extremism in the STOP ERA movement. At the launch of STOP ERA in 1972, Louisiana delegate Mary Francis gives a speech connecting the dangers of the ERA with interracial marriage. (She’s delighted to be served by white staff at the hotel.) Urged by Macray to set an example that racism won’t be tolerated in the organization, Schlafly equivocates and instead makes Francis head of the state’s chapter. Later on, Schlafly brings firebrand evangelical leader Lottie Beth Hobbs into her movement but doesn’t force her to disavow the Ku Klux Klan. “You know I am tolerant and I allow everyone to be against women’s lib for the reason of their choice,” Schlafly tells her over the phone, as we see a silent Hobbs smiling contentedly. Neither of these events has been documented as true, but they do reveal the tensions between acceptable conservative activism and the far Right, tensions visible in Schlafly’s public life. Donald Critchlow, a historian at Arizona State University and author of a book on Schlafly and conservatism, points out that “while many of the anti-ERA activists held conservative beliefs that were anti-big government, anti-egalitarian, and fearful about moral disorder in society, they never had contact with the segregationist Right—the Ku Klux Klan, the Minutemen, or white separatist groups.” Yet the segregationist Dixiecrats were coming into closer contact with the hard Right of the GOP throughout the 1960s. A prime example is Barry Goldwater’s win of the Deep South in the 1964 presidential election; Schlafly had been instrumental in forging his nomination after the publication of A Choice Not an Echo, her polemic against Northeastern liberal Republicans. While Barry Goldwater was less a racist than a libertarian, the enthusiasm Goldwater received from the South stemmed largely from his opposition to the Civil Rights Act. Indeed some of Schlafly’s biggest supporters in the Senate, such as Jesse Helms and Strom Thurmond, never renounced their support of racial segregation and continued to attack civil-rights legislation into the 1980s.

Charges of Schlafly’s Bircherism hold more weight than accusations of racism by association. The Schlaflys denied ever belonging to the John Birch Society, but the Daily Beast recently published documents showing her membership from the late 1950s to shortly before the publication of A Choice Not an Echo in 1964. Mrs. America picks up the issue: at one point a STOP ERA staffer proudly declares herself a Bircher, and Betty Friedan (Tracey Ullman) makes it her mission to show the Birchers were funding the anti-ERA movement. There isn’t any evidence that the Birch Society funded STOP ERA or its later incarnation as the Eagle Forum, but the fringes were always just in sight for the pragmatic Schlafly, who was able to work with fundamentalist evangelicals, closet Birchers, and retired Dr. Strangelove–esque military officials in pursuit of her political goals.

There would be something missing, though, if the portrait of Schlafly were reduced to a caricature of a grassroots Reaganite party faithful. The zeal for her activism came from her deeply held convictions about the traditional role of the family, the supremacy of American power, and the centrality of Catholicism. It is a common assumption among liberals today that she was merely a troll, but it was her sincere conviction that the counterculture and nuclear-disarmament treaties were paving the way for the storming of Eden. After appearing on a television program with Republican congressman Phil Crane, he asks her backstage if she really believes in the menace of the ERA. “Now it starts with a simple piece of legislation like the ERA and then the Left feels emboldened to eliminate alimony, child support, and the widow’s social security. And before you know it, we’re living in a feminist totalitarian nightmare,” she proclaims.

Such alarmism derived from Schlafly’s deep mistrust of the Soviet Union, which seeped into her criticism of liberals, feminists, progressive Catholics, and LGBT people. At the end of Episode 3, after listening to a radio broadcast about the millions of casualties that could result from a Soviet nuclear strike on Midwestern cities, Schlafly descends to the bomb shelter beneath her house and closes her eyes as “Battle Hymn of the Republic” plays over the credits. In one way the moment reveals her smallness and lack of imagination. Yet it also captures magnificently Schlafly’s sense of righteousness and her steadfastness of mission. The Equal Rights Amendment, just three states short of ratification in 1977, is still not part of the Constitution.

John Colin Marston is a freelance writer and journalist whose stories have been published in the Jerusalem Post, the Christian Science Monitor, and other publications. 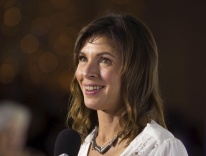