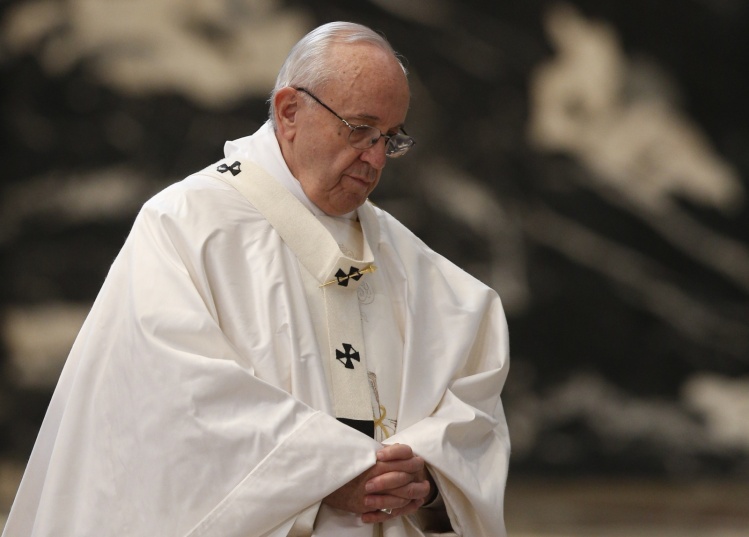 Pope Francis walks to his seat during a Mass in St. Peter’s Basilica at the Vatican April 10. (CNS photo/Paul Haring)

A news interlude dominated by speculation about “golden showers” and a graceless president who described his latest detractor as an “untruthful slime ball” invites us to search for higher moral ground.

So it might be providential that Pope Francis chose to make news last week in two ways. First, he did something that comes very hard to most public figures, and particularly to the current occupant of the White House: He apologized fervently for “grave errors.”

He also issued a remarkable document on holiness that seemed made for the moment—and, by the way, noted that we can “waste precious time” by being caught up in “superficial information” and “instant communication.”

Francis continued to preach his gospel of economic justice by warning that it is a “harmful ideological error” to cast “the social engagement of others” as “worldly, secular, materialist, communist or populist.” On the contrary, he saw holiness as demanding an engagement with “the destitute, the abandoned, and the underprivileged.”

And he lifted up words from Leviticus that we are unlikely to hear cited by President Trump: “When a stranger resides with you in your land, you shall not oppress him.”

It’s not often that public figures hold themselves to the standards they apply to others. There was thus an instructive symmetry between what Francis said in his apostolic exhortation Gaudete et exsultate (“Rejoice and Be Glad”) and his own moment of necessary penance.

In the document, the pope declared that “the lack of a heartfelt and prayerful acknowledgment of our limitations prevents grace from working more effectively within us.” Humans—every single one of us—fail, falter, and fall. We do far better when we admit it.

And this is what the pope did last Wednesday when he apologized for his terribly misguided defense of a Chilean bishop accused of covering up abuse by an infamous pedophile priest.

Many of us who admire Francis feared his apparent standing up for the indefensible was a sign that the eighty-one-year-old pontiff was incapable of recognizing the church’s profound breach of trust when it placed institutional self-preservation above a concern for the suffering of those abused by priests.

Sometimes, your friends need to tell you how wrong you are. In this case, the task fell to Cardinal Sean O’Malley, a close Francis ally. O’Malley was appointed Archbishop of Boston to begin healing the deep gashes left by the scandal there, and he read Francis whatever the Roman equivalent of the riot act is.

Francis responded with a letter to Chile’s bishops. “As far as my role, I acknowledge, and ask you to convey faithfully, that I have made grave errors in assessment and perception of the situation, especially as a result of lack of information that was truthful and balanced,” he wrote. “From this time I ask forgiveness to all those that I offended and I hope to do so personally, in the following weeks, in meetings that I will hold with representatives” of those effected.

Aside from his reference to a lack of “truthful and balanced” information—honestly, he should have known—Francis’ letter suggested the determination of someone capable of learning from his mistakes. It’s more than we’re getting from some other leaders we can think of.

This enhanced the credibility of Francis’ exhortation to the rest of us to imitate the humble day-to-day saints whom he referred to as “the middle class of holiness.”

He reiterated that the church would continue to defend “the innocent unborn,” but stressed the importance of seeing the “lives of the poor, those already born,” as “equally sacred.”

Francis added pointedly that while “a politician looking for votes” might see “the situation of migrants” as “a secondary issue compared to the ‘grave’ bioethical questions,” a true Christian would not.

It was hard to miss the message to American bishops that letting anti-abortion politicians off the hook on immigration and refugees would be a denial of their obligation “to stand in the shoes of those brothers and sisters of ours who risk their lives to offer a future to their children.”

Francis insisted that “the most decisive turning points in world history are substantially co-determined by souls whom no history book ever mentions.” That’s excellent news, because in our era, many whom the history books will mention are leading us to nowhere good. Perhaps Francis can inspire in them some self-examination—and, more importantly, provoke a badly needed rebellion by the decent people who represent “the middle class of holiness.”