The Pope, the Saint, and the Climate 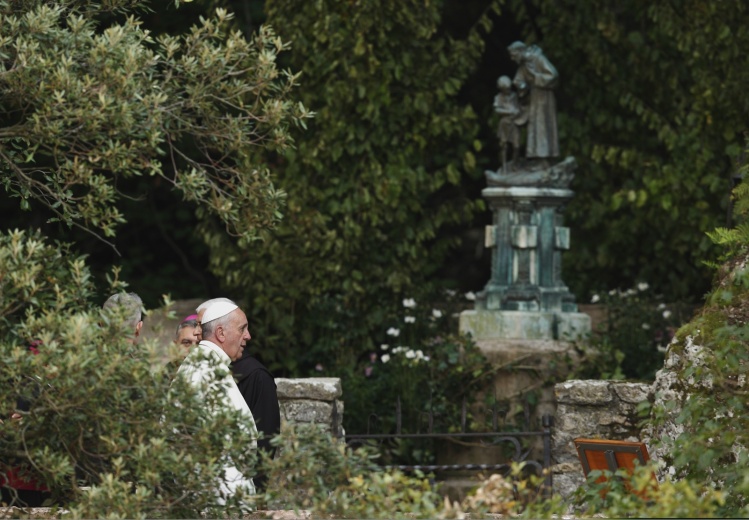 “He was a mystic and a pilgrim who lived in simplicity and in wonderful harmony with God, with others, with nature and with himself. He shows us just how inseparable is the bond between concern for nature, justice for the poor, commitment to society, and interior peace.”

At the beginning of his encyclical on climate change that will shake up environmental politics around the world, this is how Pope Francis describes St. Francis of Assisi, the saint who inspired the name he chose.

It’s worth focusing first on the pope’s tribute to the holy man who revered animals and all of nature. St. Francis’ worldview, the pope insisted, should not be “written off as naive romanticism.” His paean to the saint placed his declaration in a spiritual context even if its content was uncompromising.

The pope says flatly that a “very solid scientific consensus indicates that we are presently witnessing a disturbing warming of the climatic system,” that “things are now reaching a breaking point,”  and that greenhouse gases are “released mainly as a result of human activity.” This can only mean that humanity “is called to recognize the need for changes of lifestyle, production and consumption.”

There is no ambiguity in what the pope is saying, which is why the critics will descend upon him. Even before Thursday’s formal release of the document (and Monday’s leaked draft), they accused him of meddling in political and scientific questions that are beyond his purview.

This critique is coming especially from conservatives who have welcomed the intervention of the Catholic Church on some political issues but not others, and particularly not this one. Yet progressives and conservatives alike should attend to what motivates Pope Francis here -- not the usual left-right politics but a theological concern for our obligation to care for our “common home,” a skepticism of a “throwaway culture,” and an insistence that a belief in God means that human beings cannot put themselves at the center of the universe.

“We are not God,” the pope declares, and should not act as if we are “usurping the place of God, even to the point of claiming an unlimited right to trample his creation underfoot.” Believers who disagree with the pope will have to grapple with his religious understanding and not simply dismiss his embrace of a thoroughly orthodox view that places the spiritual and the ethical ahead of the material.

All of the pope’s trademark qualms about modern capitalism and his rejection of “a magical conception of the market” are sounded here, and there is a biting comment aimed at those who use the word “freedom” to offer blanket defenses of a system that leaves many behind: “To claim economic freedom,” he writes, “while real conditions bar many people from real access to it, and while possibilities for employment continue to shrink, is to practice a doublespeak which brings politics into disrepute.”

Yet any who claim that Francis is ignoring the Catholic past and inventing radical new doctrines will have to reckon with the care he takes in paying homage to his predecessors, particularly Pope Benedict XVI and St. John Paul II. He cites them over and over on the limits of markets and the urgency of environmental stewardship. Laudato Si’ (“Praised Be”) is thus thoroughly consistent with over a century of modern Catholic social teaching, and if it breaks new ground, it does so within the context of a long tradition -- going back to St. Francis himself.

Pope Francis poses a challenge to those of us in the wealthy nations, and he speaks specifically about how “opinion makers, communications media and centres of power are far removed from the poor.” Ouch! He demands payment of an “ecological debt” between “north and south.” Again and again, he returns to the twin ideas that the world’s poor face the largest threat from climate change and that the world’s rich have a special obligation to deal with it. The pope who immersed himself in the most marginalized neighborhoods of Buenos Aires has not forgotten where he came from.

But if Francis is making himself the Green Pope, it’s not just because he has a social agenda. Like his favorite saint, he believes in the transformative power of simplicity and compassion. “We must,” he writes, “regain the conviction that we need one other, that we have a shared responsibility for others and the world, and that being good and decent are worth it.” This is precisely where the personal and the political must meet.

Obama Needs His Friends Back