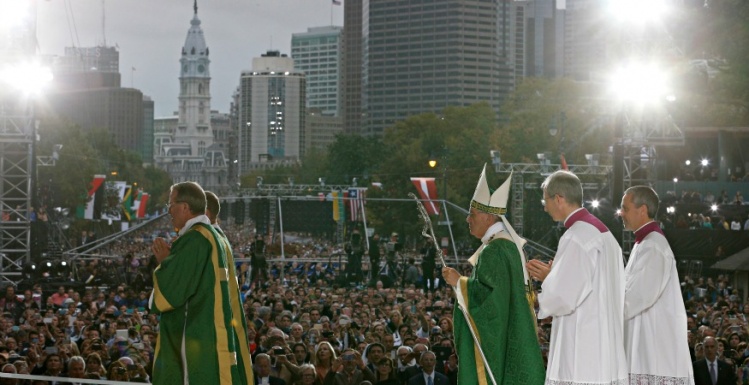 PHILADELPHIA—In his homily closing the World Meeting of Families, Pope Francis drew together the central themes of his historic visit to the United States: an ethic of care for the environment and the stranger, a vision of the family as a “factory of hope,” as he put it last night, and an openness to follow the Holy Spirit, even when that means facing the unfamiliar.

Francis began by noting that in today’s Scripture readings “the word of God surprises us with powerful and thought-provoking images.”  First, “Joshua tells Moses that two members of the people are prophesying, speaking God’s word, without a mandate [Numbers 11: 25-29].” And in the gospel, John warns Jesus that someone was casting out demons in his name (Mark 9:38-43, 45, 47-8). “Here is the surprise: Moses and Jesus both rebuke those closest to them for being so narrow! Would that all could be prophets of God’s word!”

A lot of people were put off by what Jesus said and did, Francis continued. “For them, his openness to the honest and sincere faith of many men and women who were not part of God’s chosen people seemed intolerable.” Many of them—including the disciples—acted in good faith, Francis said. “But the temptation to be scandalized by the freedom of God, who sends rain on the righteous and the unrighteous alike (Matthew 5:45), bypassing bureaucracy, officialdom and inner circles, threatens the authenticity of faith. Hence it must be vigorously rejected.” The Spirit blows where it will. What truly scandalizes, the pope explained, is that which “destroys our trust in the working of the Spirit!” (This was an exclamatory homily—nearly half of its fifty sentences ended in exclamation points.)

“To raise doubts about the working of the Spirit, to give the impression that it cannot take place in those who are not ‘part of our group,’ who are not ‘like us,’ is a dangerous temptation,” Francis warned. “Not only does it block conversion to the faith; it is a perversion of faith!” And it is faith that opens a window on the work of the Holy Spirit. Faith also reveals that “holiness is always tied to little gestures,” Francis said. “These little gestures are those we learn at home, in the family; they get lost amid all the other things we do, yet they do make each day different.” The warm meal waiting for us at home. The hug after a long day’s work. The blessing before bed. Love, Francis said, “is shown by little things”—and it is love that shapes faith. “That is why our families, our homes, are true domestic churches. They are the right place for faith to become life, and life to become faith.”

So how, Francis asked, are we living this love? “What kind of world do we want to leave our children?” The Holy Spirit calls all of us to act together—because we cannot respond to that question on our own. “The urgent challenge of protecting our home includes the effort to bring the entire human family together in the pursuit of a sustainable and integral development, for we know that things can change,” the pope said. “Would that all of us could be open to miracles of love for the sake of all the families of the world, and thus overcome the scandal of a narrow, petty love, closed in on itself, impatient of others!”

Departing from the prepared text, Francis asked a question of the assembled masses: “In my own home, do I shout or do we speak to each other in love and tenderness? That’s a good way of measuring our love.”

“And how beautiful it would be if everywhere, even beyond our borders, we could appreciate and encourage this prophecy and this miracle!” Francis continued. Faith in the word of God “invites all those who want to share the prophecy of the covenant of man and woman, which generates life and reveals God!”

Francis concluded by exhorting the million-strong congregation to adopt an attitude of gratitude toward “anyone who wants to bring into this world a family which teaches children to be excited by every gesture aimed at overcoming evil—a family which shows that the Spirit is alive and at work…whatever the family, people, region, or religion to which they belong!”

Following Mass, Francis will meet with the many volunteers, organizers, and donors who put together the World Meeting of Families, after which he will board a plane, return to Rome, and steel himself for what might be the most important moment of his pontificate. The Synod of Bishops begins in seven days.