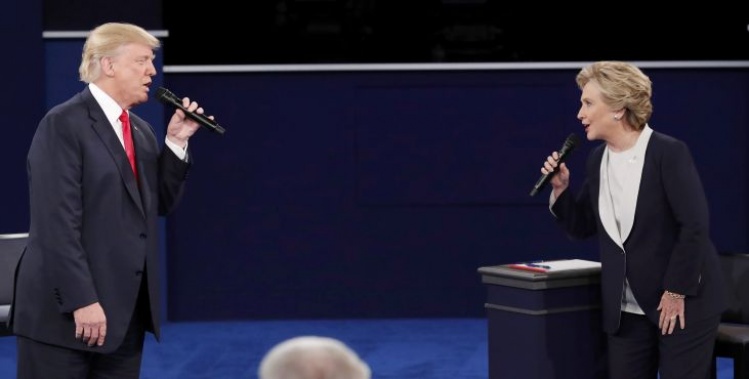 As the next issue of Commonweal goes to press, the November election is just weeks away, and the nation remains deeply polarized between two unpopular presidential candidates. Hillary Clinton’s candidacy is weighed down with the baggage of her many years in politics, worries about influence peddling, and doubts about her personal honesty. Meanwhile, Donald Trump has conducted a campaign of unprecedented vulgarity and openly courted violence. He speaks (mostly shouts) ominously about how the election is “rigged” while promising to throw Clinton in jail if he wins. Nothing Trump says or does seems to deter his most devoted followers. These disaffected voters have convinced themselves that his unpredictability and ignorance will somehow right the ship of state at home and intimidate the nation’s adversaries abroad. By some magic he will also tame the globalized economy and shore up middle-class incomes. Predictably, Trump boasts that more “law and order” will resolve the nation’s racial conflicts. His virulent condemnation of politicians and government evidently speaks to the pent-up frustrations of at least a third of the electorate. Too many Americans appear to have lost faith in the institutions and perhaps even the ideal of our democracy. They scoff at the notion of “public service,” and cheer when Trump brags about how smart he has been to avoid paying taxes.

Liberal democracy is facing real challenges. Globalization and growing economic inequality, terrorism, climate change, endless war in the Middle East, and the machinations of rogue nations such as Russia and North Korea have created much fear and resentment. Some disturbing recent polling suggests that many younger Americans are indifferent, if not dismissive, toward the value of democracy itself. Shockingly, almost a quarter of millennials think democracy is a poor way to organize our common life. This is manifested in their lack of interest in voting and general detachment from political parties and civic associations. Americans in all age cohorts—especially wealthier Americans—say it would be better to hand over the job of governing to so-called experts. Even more disturbing, there has been a steep rise in the number of Americans who express tolerance for authoritarian forms of governance (see “When It’s Democracy Itself They Disavow” by Rebecca Burgess, AEIdeas).

In this climate, it is unsettling to hear Catholic pundits, such as First Things editor R. R. Reno, speak disdainfully of the West’s “liberal regime,” while suggesting that a return to older and more “organic” forms of nationalism promises to oust corrupt elites and reinvigorate the nation. Others, like New York Times columnist Ross Douthat, question the strength and resilience of the “liberal order,” and darkly warn that “elite mismanagement” and the thin metaphysical gruel of “procedural liberalism” are feeding the rise of the far right and the far left. Yeats’s “rough beast,” they suggest, is now slouching toward Washington.

The emphasis varies from writer to writer, and much of this dire prognosticating is couched in the usual “I’m only repeating what I’ve read” qualifications. Is there an element of truth in these warnings about the fragility of liberal democracy? Yes. Is Catholicism’s emphasis on individual morality, the sanctity of life, family, and local allegiances essential to the health of democracy? Absolutely. But what is too often missing from these critiques is any sign of affection for the democratic system we have all been entrusted with and have a responsibility to pass on. Then again, for a certain kind of Catholic thinker there is little new in these denunciations of modernity’s achievements. Faith in liberal democracy was notoriously weak among Catholic intellectuals across Europe in the first half of the last century. Corruption and parliamentary paralysis convinced many that the “liberal order” was doomed to fail and a more “organic” autocratic or authoritarian kind of politics was necessary to establish civil peace and the rule of law. Order was established—often at a terrible cost—but peace proved fiendishly elusive.

This nation’s current political crisis is not nearly as dire as the one that confronted Europe a century ago. Idle talk of the impending collapse of American democracy is mostly just that. We may live in an unusually contentious time, but not under a “failing regime.” In any case, we are not helpless subjects, but citizens who have the ability to reshape this nation’s future. Now is the time to renew our commitment to self-government and the common good. Politics must not be reduced to slogans like “it’s the economy, stupid,” but refocused on the unfinished work of forming a more perfect union. That union entails rights, but also responsibilities. What the Catholic Church has long taught about each individual’s civic and political duties is an invaluable resource in the battle against those who seek to delegitimize liberal democracy. As Catholics and citizens, we are not free to give up on politics as usual. Our country depends on it.