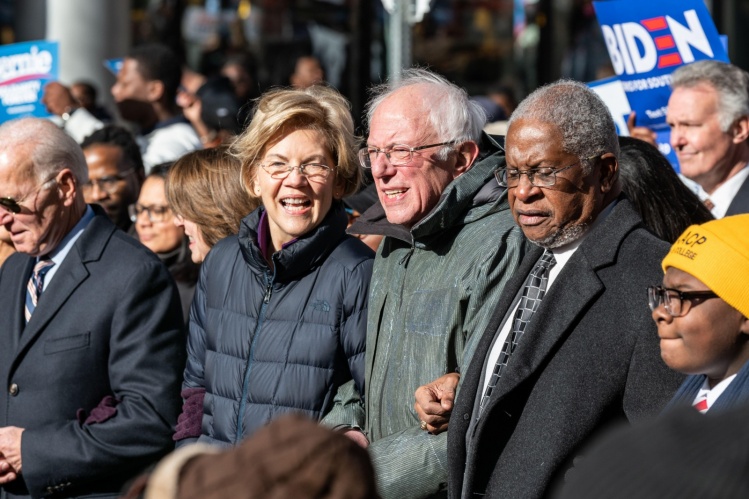 It may not be a surprise, but it is a heartbreak for many of us that Elizabeth Warren just dropped out of the presidential election.

Although there was a period of time when she was polling at the top of the Democratic field, her base of support narrowed recently to only those who loved her most deeply—the ones who didn’t care about polling as much as plans, and who wanted someone to fix systemic corruption while also jogging in a feather boa. Demographically, these people are mostly college-educated white women or as I call them—us—Warren moms.

This has been a very rough week for the Warren moms.

Our once-promising candidate is done for good—as, in fact, are all the women candidates who once posed so optimistically for photo shoots. Now we’re left with two old men, both in imperfect health, who each have substantial baggage. It’s not a great situation.

I feel you, fellow moms. And I am here to make the case for you to vote for Bernie Sanders.

Warren has herself so far refrained from making an endorsement—if she’s pitting the two remaining candidates against each other in a bidding war that ends in her being appointed head of the Truth and Reconciliation committee for the Trump administration, I’ll respect it—but I hope she strongly endorses Bernie and soon. Despite their stylistic differences, their policy hearts are in the same place (with working people, and far away from the credit-card companies in Delaware).

A Warren endorsement could go a long way toward smoothing the waters between her most devoted fans and the candidate who polls the worst with this exact cohort. Because Bernie needs the moms badly. If he cannot rally college-educated liberal women to his side, he will not prevail in the days and weeks to come. The path to winning the primary runs through the PTA.

Now, if anyone from the Sanders campaign is reading this, I have some thoughts about how he can reach the moms. But first, a word to my sisters.

If you are like me, some of what you appreciated about Elizabeth Warren was that, well, she reminded you of you. Pundits have claimed that Warren’s success was about college-educated voters gravitating to an academic, or discourse-loving voters digging a candidate who spoke the argot of activism fluently, and maybe that’s the case for some people. But for the women I know, it was much simpler. She seemed like a fellow mom. The person who remembered snacks and sunscreen. Who made a budget and a schedule. Who could toggle back and forth between the little things and the big picture because sometimes you need to cut apple slices and make summer-camp reservations at the same time.

Some may feel that Bernie is too left-wing for the moms, but I think the problem is more about affect than policy. The lesson of Warren’s brief surge in the polls and her longer dominance in the hearts of my friends is that a left agenda is no barrier to the love of suburban moms.
sharetweet

Middle-aged women are the unsung heroes of this political moment. According to research by Theda Skocpol and others, we powered the 2018 midterm elections that saw Democrats take back the House of Representatives, and the women I know are far more likely than men to canvass voters, send postcards, volunteer at polling sites, and organize protests. In my own small city, a text chain of moms started one week after the 2016 election turned into an organizing group that flipped a 2017 city-council seat and may have just helped pass a measure to fully fund our local public schools (California takes forever to count votes and requires a two-thirds majority to raise taxes so it’ll take a while to find out).

To a woman, the moms in that group loved Warren. Not because she was super-smart or lingo-happy, but because she was, like us, doing the work. The idea that the next president could be an example of the kind of woman who made the Resistance possible seemed beautiful and right. It seemed like cosmic justice. Ah well.

Bernie will not, my beloved moms, remind you of you. There is a decent chance he will remind you of an ex-boyfriend from college whom you remember, and not fondly. The very qualities that endear him to his supporters—the righteous anger, the uncompromising stands—are not universally admired by moms.

But here’s what I hope you will consider. It’s a race between Bernie Sanders and Joe Biden. Biden has some real issues. The more people see him in person, the less they like him, which seems like a blaring warning signal. He has cast many bad votes, none of which he’s really been forced to explain, and pals around with dodgy donors. And there’s the looming corruption scandal that, fairly or not, risks being “Her Emails” all over again.

Also, and this is what really matters: your kids love Bernie.

According to exit polls, Bernie won 61 percent of voters under thirty on Super Tuesday. He is the candidate of the coming generation, and, moms, if you are used to anything, it is doing things that you find unpleasant because it makes your children happy. Think of a vote for Bernie like eating a dinner of chicken nuggets and watching Frozen 2. Is it your first choice? Honestly, no. But you’re doing it because they like it.

Some may feel that Bernie is too left-wing for the moms, but I think the problem is more about affect than policy. The lesson of Warren’s brief surge in the polls and her longer dominance in the hearts of my friends is that a left agenda is no barrier to the love of suburban moms. The voting patterns of Super Tuesday, however, confirm that it is also no guarantee.

Bernie will need to make his case to the moms, clearly and respectfully, as Elizabeth Bruenig, Eric Levitz, Ezra Klein, and others have argued. The same care and dedication that his campaign has given to organizing and activating other groups can be applied to moms.

Some of this is small stuff—at the moment, as I recently learned, when you donate $27 to the Sanders campaign, a video clip pops up of Bernie giving dap to Killer Mike. If you’re a thirty-year old superfan of Run the Jewels, this creates a frisson of pleasure (I assume). If you’re a mom, you’re at best confused and at worst reminded that one of Bernie’s favorite surrogates is a gun-rights advocate. Not ideal.

More to the point, while moms love tackling billionaires, we also get the physical newspaper dropped off at our house in the morning and watch MSNBC at night, and so aren’t as receptive to broadsides against “the media.” And, while we adored Warren, we also may have bought that orange Nancy Pelosi coat, so railing against the “Democratic establishment” risks leaving us cold.

And I know that to some Bernie fans, this kind of stuff reads as “cringe.” But I say all electoral politics is cringe—you just don’t find such sops cringe-y when they’re directed to you. Warren moms are a particular subgroup with our own idiosyncrasies, but, at the end of the day, we only want what anyone wants: power, respect, and a call on our birthdays.

If the campaign wants to reach us, it can. Could certain online Bernie supporters have been more gracious when it looked as if his campaign was on an unstoppable path to victory? Sure. Are we actually going to make manners a deal-breaker when the fate of the planet is on the line? I really hope not. (That being said, there’s nothing wrong with manners, and, as I often tell my own kids, you catch more flies with honey.)

But when Bernie tries to pitch you, moms, please listen. Because here is my cold-blooded calculation. My fellow moms and I are going to show up in November 2020, no matter who is on the ticket, and I fear the youth are not. If your child is eligible to vote, he or she is much more likely to vote if Bernie is on the ballot. Your choosing Bernie now helps your kid choose him later. And if your child is too young to vote, think about what he or she most cares about. Climate change? Health care? Student debt? Then think about which candidate wants to make real change in that area.

Dorothy Fortenberry is a playwright and screenwriter. She is currently in her third season as a writer and producer on Hulu’s award-winning adaptation of The Handmaid’s Tale. Her play Species Native to California recently received its world premiere at Iama Theatre in Los Angeles. Other plays include Partners, Mommune, and Good Egg. Her essays have been featured in publications including Real Simple, Pacific Standard, and the Los Angeles Review of Books.

‘One of Those Serious Women’