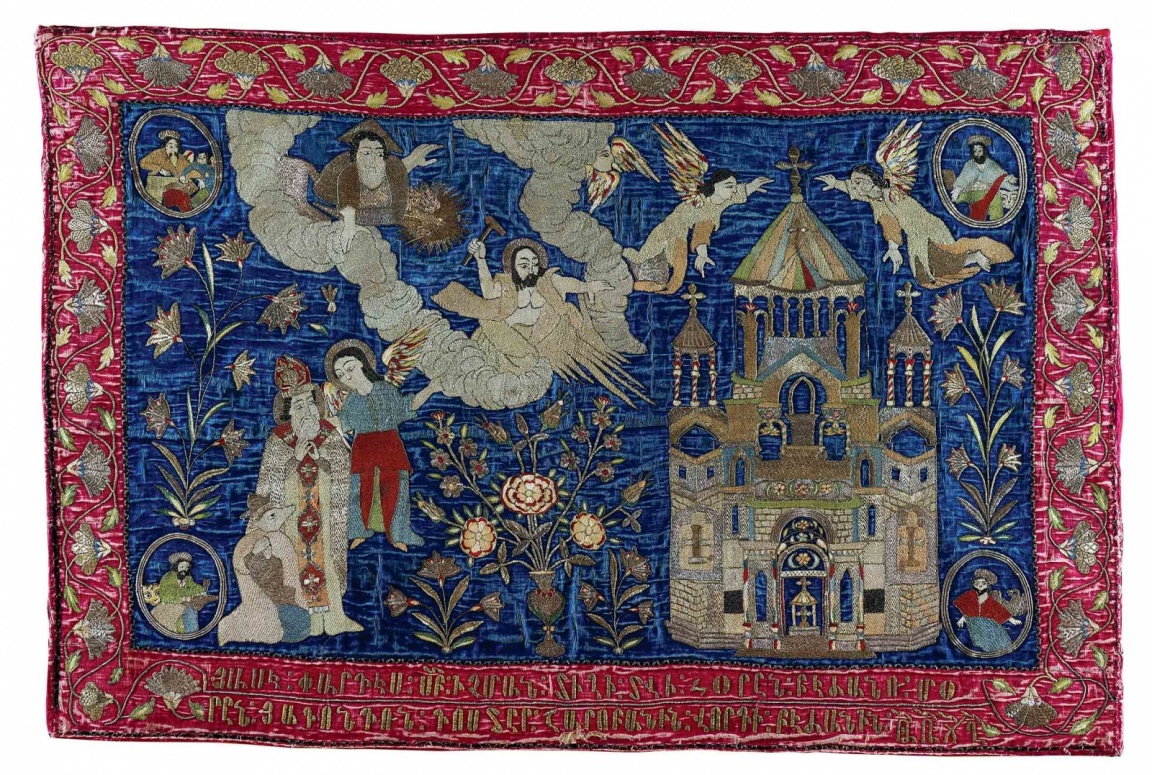 On the same Mount Ararat whose twin peaks cradled Noah’s Ark, Christ revealed to St. Gregory the Illuminator the spot where the first Christian church was to be established: the Holy Etchmiadzin, the Mother See of Armenia. An image of this episode, stitched onto Chinese silk in 1741 by wealthy artisans in Persian New Julfa, blends mythology with history, and combines religious with national identity. It tells the story of the death of paganism, the foundation of Christianity, and the endurance of Armenian culture across epochs and empires.

It is, in fact, the third representation of this event on display at the Met’s Armenia! Exhibition, on view until January 13: we see the same story on a fourth-century stele, and then again on a processional banner from the monastery at Lake Sevan. According to this story, the jealous King Tridates had been transformed into a wild beast, Sweeney-style, for his rejection of Christianity. By curing him, St. Gregory founded the world’s first Christian nation. This church, and this nation, would survive alongside, among, and at the whim of many empires, from the Sasanians and Byzantines to the Mongols, Czars, Safavids, Ottomans—even the Soviets.

The Armenians were a people at the center of extensive webs of empire and trade.
sharetweet

Armenia’s reach astounds. It sent missionaries to Karakorum and traders to Sunda Kelapa; it lent monks to Perugia and St. Albans; it even constructed churches in Madras and Zaitun that remain in use today. Armenia’s prosperous merchant class connected Istanbul with London, Isfahan with Manila and Carabucco, and controlled all external trade in Safavid Persia. The Armenians’ prominence as merchants and Christians is reflected by inclusion in Indian tapestries, English maps, Venetian costume books, and Persian watercolors. They were a people at the center of extensive webs of empire and trade.

Incredibly, threads of community and continuity stretch throughout this vast network, held together by the ancient Armenian language. Today we can still learn who commissioned the Reliquary for the “Holy Cross of the Vegetarians,” where it was forged, and when made, by reading the looping script covering its back. This continuous thread of language allowed the Armenians to survive as something of a transitional people, existing at the edges of empires and connecting them. 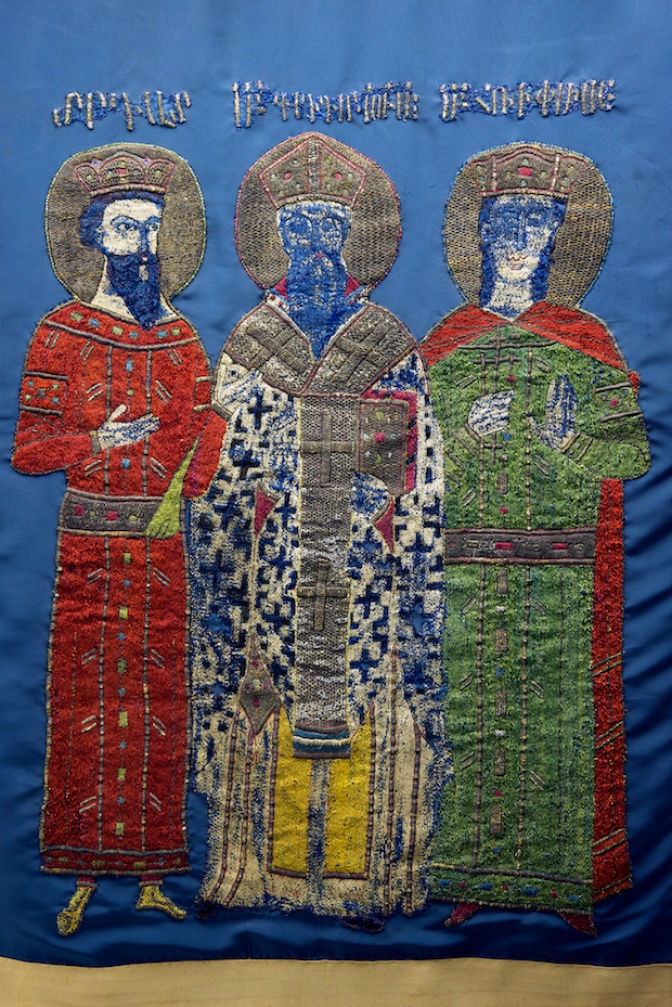 The Met exhibit makes the connections clear. An illustration of an Armenian bishop, his stole emblazoned with a Fleur-de-Lis, is presented beside a scrap of French cloth with the same image. More often, though, Armenian artists did not just borrow from other parts of the world; they merged foreign influences with their own unique traditions. A pair of golden censers combines gothic European decoration with Ottoman arabesques, and arm-shaped reliquaries are remade for Armenian saints. The peculiarly Armenian veneration of illuminated gospels produces all kinds of unexpected treasures. We see St. John the Baptist enveloped in an amoeboid membrane of divine inspiration, the Magi dressed as Mongols. These artists frequently used the new materials and techniques that Armenia’s wealthy trade networks had put into the hands of their patrons: silks from China, cloth printing from India. Walking through this exhibit, one traverses whole epochs, climates, empires. The effect is almost miraculous.

The Met’s permanent collection can tell you much about the Greeks and Romans, the Babylonians and the Assyrians, medieval Japan and the many dynasties of China, but it does not have as much to say about more marginal peoples. History, here, gathers at the center. If one wants to see peripheries, one must look for them. Wandering the galleries, one rarely get a sense of the vast mosaic of peoples who lived within and often long past those great empires of stone, paper, and capital. The presence of so many Armenian works, directly beside sculpture from Pergamon and Rome, offers an alternative view of history, one in which time eventually pulls down the mighty from their thrones and sometimes lifts up the lowly. The margins come into focus.

A massive 4’x12’ paper map, commissioned in 1691 for the Venetian ambassador to Constantinople, attempts to chart the Armenian world in tempera and ink. Rather than focusing on the limits of the Ottoman Empire, the Tabula Choreographica Armenica maps churches, overlaying geography with religion and history, including, in this ostensibly modern depiction, a mad St. Gregory smashing demonic idols in the fourth century. The map rejects the familiar cartographical conventions of borders, roads, or any topography that is not resonant with this particular history. It projects continuity, not power. 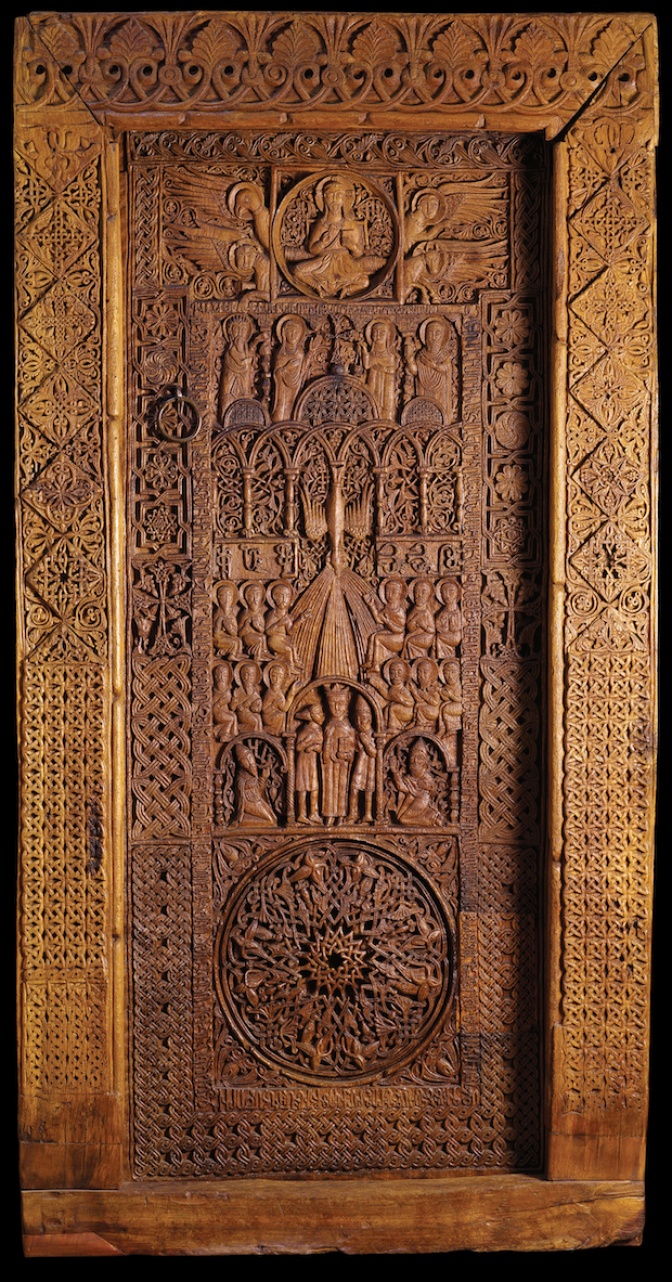 Another example, passed over by the audio guide and ignored by most visitors, is even more astounding. It is a door, complete with frame, carved in the fifteenth century out of walnut and brought here from the monastery at Sevan. It lacks the colors of the illuminated gospels, the antiquity of the stele, or the monumentality of one of the printed altar screens. But on its face is a uniquely Armenian cosmology, chiseled in exquisitely fine detail into the wood, beginning with the Apocalypse and stretching back to the Creation. Every inch of wood is inscribed with glory: minute floral patterns twine between stately arches; the rays of the Pentecost baptize twelve clearly individualized apostles; a troika of mysterious figures—a man in a Carpathian cap, a king crowned with the cosmos, and someone whose head somehow contains both human and dog faces—are blessed by monks.

Below them all spreads a remarkable geometric pattern, a sharply arabesque interweaving of branches and buds, like the nucleus of a cell or a star’s corona. Composed of flowers and birds, it is a dense, almost impenetrable design. It might be the birth of the universe, or it might be nothing at all. All of this is chiseled shin-high into a door, an object that dozens used every day—priests and monks and pilgrims—so often that they must have ceased to notice the carvings.

But a door, when you think about it, is a place of transition: from inside to outside, from public to private, in this case from profane to sacred. It’s the person who passes through the doorway who provides the continuity between these apparent opposites. This fifteenth-century door is a fitting emblem of Armenia’s historic role as a cultural go-between: beautiful, durable, and easily overlooked.