A Pattern of Missteps

Compromise is not a dirty word in democratic politics, nor is the balancing of conflicting goods foreign to the church’s tradition of casuistic moral reasoning. So why do so many American bishops appear to spurn both in their prolife advocacy? Do they really think the hardest line is always the best one, or the most persuasive?

Instead of addressing the legitimate concerns of those who oppose the church’s teaching on abortion—such as concerns for the health of women—American bishops too often seem to fear that any acknowledgment of the complexity of this issue would weaken their own position. And instead of speaking from the real strength of their position, and assessing their political situation rationally, too many bishops are in a hurry to warn of impending betrayals and persecutions, suggesting that their prochoice political opponents have more power and fewer scruples than they actually do.

Thus, American bishops spent a fortune on a campaign to defeat the illusory threat posed by the Freedom of Choice Act (FOCA), which has almost no chance of becoming law. Rather than concede that they may have exaggerated the threat posed by FOCA, some bishops talk as if they themselves averted it by means of their furious warnings. Then there were the denunciations of the University of Notre Dame for inviting President Barack Obama to give its 2009 commencement address, an act some bishops seemed to equate with apostasy. More complicated and consequential was the role played by the USCCB during the congressional debate over the recently passed health-care-reform bill. The bishops ended up opposing the bill because of their dubious reading of its provisions to restrict abortion funding and protect existing conscience clauses (for more on this, see Timothy Stoltzfus Jost’s “Episcopal Oversight”).

Apart from such political blunders, recent pastoral failures within the American church have also undermined the credibility of its teaching about abortion. Bishop Thomas J. Olmsted of Phoenix recently alarmed even many staunchly prolife Catholics when he publicly announced that Sr. Margaret McBride, RSM, had excommunicated herself by approving a request to remove a fetus from its mother’s womb in order to save her life. McBride served on the ethics committee at St. Joseph’s Hospital and Medical Center in Phoenix. Late in 2009 a woman was brought to the hospital suffering from acute pulmonary hypertension, a life-threatening condition for any pregnant woman. If the pregnancy, then in its eleventh week, continued, both mother and child would probably die.

Abortion is not permissible under any circumstances, says Bishop Olmsted, not even to save the life of the mother. But others, including some very conservative Catholic moralists, think that, in cases where a pregnancy will almost certainly kill both the woman and her unborn child, separating the child from the mother is morally justified. The arguments here are complicated. Suffice it to say that the intention of those who remove the embryo or fetus from its mother’s womb is not to kill a developing child but to save the mother in a situation where the child has no chance of survival and the woman has no other chance. It is not clear to many Catholics why in cases of ectopic pregnancy the church will allow the removal of a fallopian tube—and with it an embryo—in order to save a pregnant woman’s life, while it will not allow the removal of a nonviable fetus to save a woman from dying because of pulmonary hypertension. It is not enough for bishops to say or imply: “Trust us. There’s a difference.” Nor is it fair to expect Catholics to overlook the death and human suffering occasioned by such theoretical subtleties.

The statements issued by Olmsted admit of no complexity or uncertainty when it comes to such hard cases. Certainly, the bishop had a responsibility to question Sr. McBride’s decision. What he should not have done was assume that she and others were acting in intentional defiance of Catholic teaching. Instead of simply announcing the excommunication of someone of good faith and great dedication who was faced with a now-or-never, life-or-death decision, why didn’t the bishop simply express concern that McBride might have erred, and explain that it is a bishop’s duty to investigate the incident? In that way, he might have avoided lending support to those who argue that the church cares more about embryos and fetuses than about their mothers, and that Catholic bishops won’t be satisfied until the law forces women to continue pregnancies that are a death sentence for both them and their unborn children. 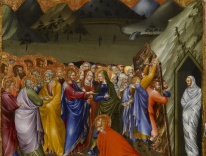