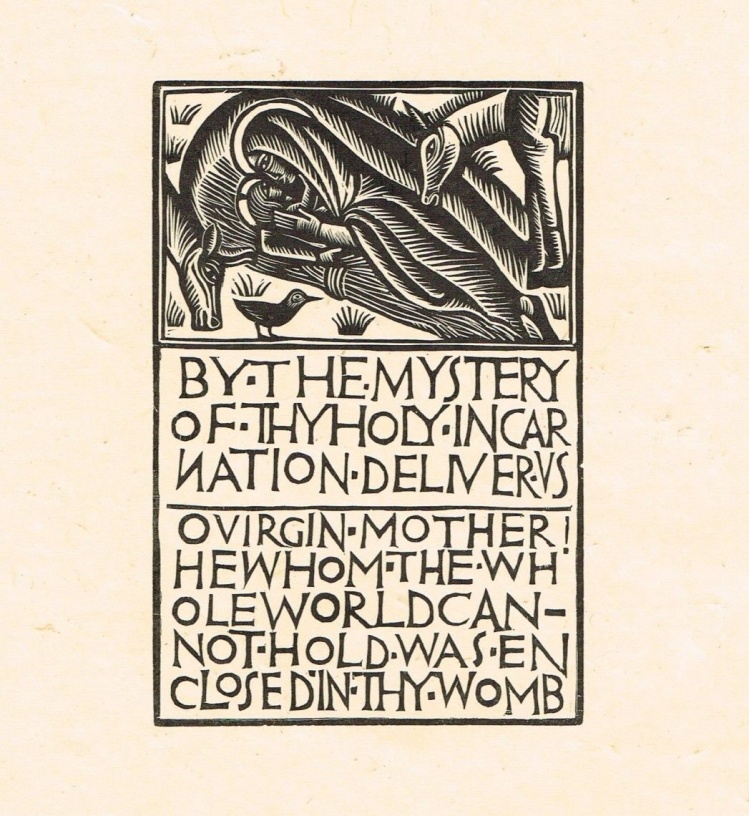 Made in 1924 on the hard, end-grain surface of a boxwood block, Nativity is one of David Jones’s “early attempts” at wood-engraving and lettering. It embodies these lines from the Mass of the Eve of the Assumption: “By the mystery of thy Holy Incarnation, deliver us / O Virgin Mother! He whom the whole world cannot hold was enclosed in thy womb.” The engraved letters crowd and press together against the confines of their frame, achieving in this constrained space a kind of jumbled intimacy. Above them, the figures of Mary and her newly born son meet in intimate embrace, their bodies wrapped in the cloth, hay, and land itself, all of which form a kind of sheltering womb. Only the barnyard animals—the ox and the ass—exceed the frame, freely grazing and looking on in tender contemplation.

At a time when the rule of life across the globe has been disrupted by the paradoxes of collective isolation, a sensitivity to “the small,” to containment and enclosure, presses upon individuals, families, and society in unexpected and often confounding ways. Like Jones’s experimental letter forms, we awkwardly jostle for space within the confines of our homes, balconies, and gardens. Even communal spaces like parks and grocery stores seem to have shrunk, as attempts to heed social distancing alter our awareness of space. Our sense of what counts as crowded has changed, as we learn to accommodate these new rules. Meanwhile, many of us, particularly those in self-isolation, are simultaneously learning just how vastly vacant even a small space can feel.

We can recalibrate our senses to the mysteries of the small through meditation on that paradox of paradoxes, the Incarnation, with the help of this little wood block by David Jones. Throughout Jones’s work there is a marked affection for “things familiar and small.” It is inseparable from a spiritual practice of attention—tuning our senses to that which is easily overlooked or undervalued. Wrapped up in this sensitivity to the small is a care for the fragile, the vulnerable, and a discovery of the surprising resilience of the delicate. It is guided above all by the conviction that it is through refinement of our attention that the wonder and mystery of the created world, particularly in its relation to the divine, reveals itself most fully to us. Focusing on what is small and seemingly commonplace becomes a portal for seeing all things in light of the love of God and thus yields, paradoxically, the most generous and capacious of vantage points.

The liturgical text inscribed in Nativity orbits around a central axis of the mystery of creation and a transcendent Creator: “He whom the whole world cannot hold.” The Creator, who is not within this whole, but Maker and Sustainer of all that is, exceeds the expansive reach of not just this globe but the hidden cracks and crannies of an unfathomably vast universe. The thickly carved “o” of “world” directs our attention to this letter as the symbol of both enclosure and infinity. As in Alain de Lille, Dante, and Nicholas of Cusa, the divine is imagined to be like an infinite sphere whose center is everywhere and whose circumference is nowhere. The Maker of stars and worms is intimately present to each part of creation, yet circumscribed by none. Praised in the reverberations of the O Antiphons and the trisagion across the globe, “Holy, Holy, Holy,” these invocations are echoed in the inscription’s stacked o’s of “whom,” “world,” and “hold”—the Holy One who holds that which only God can hold—all that is.

Near these “o”s, a pattern of three diagonally descending “o”s emerges from the left margin to the right in “ole,” “not,” and “closed.” The immense enclosure represented by “the whole world” is not, the inscription suggests, a closed whole. If this delimitation of power challenges the pretensions of the closed circle—reminding us that “o” is also the digit zero—it simultaneously graces the whole with a greater power and presence than its own. Held open by that which is in excess of it, like that hyphenated “can-not” broken across lines, the circle of the world awaits completion in that which it is not—in this timeless, invisible, and infinite relation to its Maker.

We are in truth, as Julian of Norwich reminds us, enclosed not by walls or government guidelines, but by the enduring intimacy of the love of God.
sharetweet

But in the “mystery of the incarnation” it is the Creator himself who traces the trajectory of these diagonally descending “o”s. The Word made flesh, “though he was in the form of God, did not regard equality with God as something to be exploited, but emptied Himself, taking the form of a slave, being born in human likeness” (Philippians 2:6–7). “Infinity,” in the words of Gerard Manley Hopkins, “dwindled to infancy.” In the nativity of Bethlehem, divinity arrives almost unnoticed, like the diminutive “o” of this series, suspended and seeking room for itself between the crammed “l” and “s” of “closed.” As Mary “wrapped Him in cloths and laid Him in a manger, because there was no room for them in the inn” (Luke 2:7), so the Maker encloses himself within this finite circle of a local time and place. Mary, the “virgin mother,” is thus given to hold that which only God can hold—all that is.

The shape of this “o” derives from the Greek letter omicron, meaning literally micro or little “o” (in contrast with omega, the final letter of the Greek alphabet). Fully human and fully divine, Christ becomes an omicron—a microcosm of the whole world touched, healed, and united with its Creator. The place of “thy womb,” that most conceivably intimate of human enclosures, reverberates from this center point as concentric rings pulsating outward and drawing back echoes of praise from the crooks and crannies of the created order. By the renewal of “thy holy incarnation,” each small thing, including each of us, becomes a center point for this infinite circulation of the immeasurable and invisible relation with the Creator.

Jones’s reversal of the “n” of “incarnation” here is likely to have been a mistake—to engrave on a wood block, the artist must think in reverse: the inked block imprints on paper as a mirrored image. But if this is a mistake, it is a propitious one. The arrival of God-with-us brings many reversals, some of which we see even now in the midst of our encounter with a virus that by nature exposes the factitiousness of national borders. There may be some things to celebrate in such an upside-down world: the homeless sheltered in airports; seabirds returning to beaches to nest; neighbors less like strangers, greeting one another often for the first time. The imposition of rules and restrictions presumed alien to a capitalist culture may also bring a renewed encounter with the meaning of our freedom, one more akin to the “fiat mihi” of Mary. Like the broken “can-not” of Jones’s inscription, the illusion of individual freedom as endless, boundless choice, may open and bend toward the more expansive freedom of the common good, the concomitant humility to accept limits, and the discipline to love ourselves and others as best we can. It may be precisely through the limitations, imperfections, and mistakes—those incomplete circles—of our awkward attempts to accommodate and shelter one another that a new configuration of the whole can be born: “By the mystery of thy holy incarnation, deliver us.”

For many Christians, enclosure has meant a forced exodus from places devoted to prayer, cathedrals and churches. Exile from such native places of grace may instigate not only a holy longing to return, but heightened intimations of divinity dwelling in the margins and the everyday, in the familiar made strange and the strange made familial. In this practice of loving attention, we recognize, as Mary did, the unfolding of divinity before and through us. So, too, may we make our prayer anew, in the words of Jones’s poem “The Tutelar of the Place”:

protectress of things known and handled

help of things familiar and small

wardress of the secret crevices

of things wrapped and hidden [...]

them in the rectangular tenements, in the houses of the engines

that fabricate the ingenuities of the Ram...

Mother of Flowers save them then where no flower blows.

As the whole world fights to contain a contagion through the mantra “stay at home,” uniting and separating lives in various ways, our spiritual labor in this time may be to find these openings for grace within the multiple circles of our everyday circumstance as these widen and intersect with others, and in light of their relation to the divine Other. We are in truth, as Julian of Norwich reminds us, enclosed not by walls or government guidelines, but by the enduring intimacy of the love of God. For “he is our clothing that for love wrappeth us and windeth us, holdeth us and all becloseth us, hangeth about us for tender love that he may never leave us.”

*This is the first of three essays on David Jones’s work. The next two will appear in our October and November issues.

Glimpses of a New Order