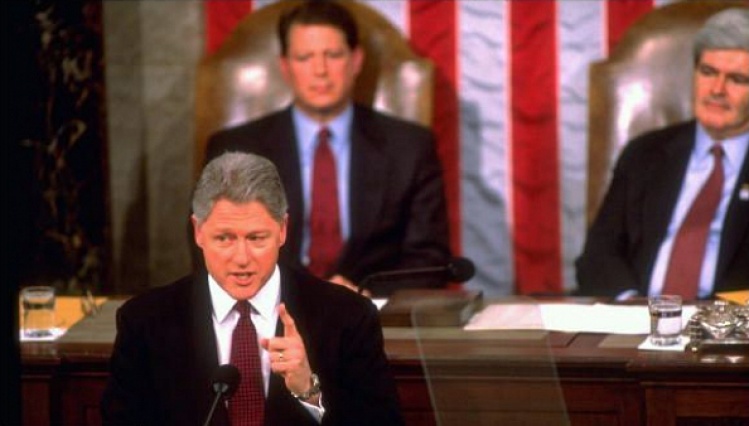 Bill Clinton discussing immigration in his State of the Union speech in 1996.

The last time the nation’s immigration law was overhauled, it was widely reported that Democrats had won the fight because the Republican-controlled Congress backed away from its most onerous proposals.

President Bill Clinton signed the Illegal Immigration Reform and Responsibility Act the month before his 1996 re-election victory over Senate Majority Leader Bob Dole. Like House Speaker Newt Gingrich, Dole had been pushing for such tough provisions as allowing states to bar unauthorized-immigrant children from public schools. The bill passed without that measure, leading Clinton to declare that the law was being strengthened “without hurting innocent children or punishing legal immigrants.”

Not so. The 1996 law has proven to be a civil-liberties nightmare by requiring mandatory detention, often without a bond hearing, for non-citizens (including those in the country legally) convicted of a wide range of crimes. Many of those detained—more than a quarter-million people since 2000—are ultimately found eligible to remain in the United States. Some 17,268 of them had been in the country for 20 or more years when they were arrested and jailed, according to federal data made available by the Transactional Records Access Clearinghouse at Syracuse University. In hundreds of cases, people who actually were American citizens were mistakenly detained as illegal immigrants, according to the Deportation Research Clinic at Northwestern University.

One little-noticed aspect of the law: It allocated $12 million to build a fence along the border near San Diego.

The 1996 law was no defeat for the nativism that was building in the House Republican caucus, following on California voters’ approval of the anti-immigrant Proposition 187 in 1994. It allowed for mass incarceration of immigrants—which Republicans in Congress later enhanced with a measure that forced the government to maintain at least 34,000 immigration detention beds, whether they were needed or not.

As Congress looks to overhaul immigration law anew, the discussion is not about how to end the injustices the 1996 law has caused while better securing the borders. With the exception of finding a path for the young immigrants protected under President Barack Obama’s Deferred Action for Childhood Arrivals order, it’s about making that law tougher.

We may very well wind up with Democrats taking bows for saving the “DACA kids” but accepting an even harsher immigration law than they ended up supporting in 1996.
sharetweet

We may very well wind up with Democrats taking bows for saving the “DACA kids” —Democratic senators shut down the federal government to do it—but accepting an even harsher immigration law than they ended up supporting in 1996.

The immigration bill House Republicans proposed earlier this month includes a section similar to a measure they approved in September, the Criminal Alien Gang Member Removal Act. It grants enormous power to the government to identify criminal gangs through a largely secret process and to allow immigration agents to then decide who is actually a member, based on the somewhat vague description in the law. Actually, it goes beyond gang members to include associates, stating that anyone who has “been a member of, promoted, or conspired with a criminal gang, either inside or outside of the United States, is inadmissible.”  For someone accused unfairly—and it’s easy to imagine that, given the track record of U.S. Immigration and Customs Enforcement and the rhetoric of the president—the only resort is to appeal to the immigration court run by the Justice Department and meanwhile wait in jail, without a bond hearing and, in most cases, without a lawyer.

The 1996 law was passed in a rush as part of a budget bill that was needed to prevent a shutdown of the federal government, weeks before the presidential election. Most members of Congress and the news media knew little about the law’s contents. They didn’t realize that a relatively minor conviction, such as for a low-level drug offense, could be construed under the new law to require mandatory detention and deportation. (The law requires detention of any non-citizen who committed an “aggravated felony,” a poorly defined term.) They weren’t aware how little discretion it left to prosecutors or the courts to avoid detaining and deporting an immigrant who fell within the statute’s broad scope.

In 1999, 28 members of Congress from both parties wrote to Attorney General Janet Reno to ask that she exercise prosecutorial discretion to avoid deporting some of the immigrants whom Congress had insisted on deporting. The signers included Rep. Lamar Smith (R-Texas). They wrote:

Some cases may involve removal proceedings against legal permanent residents who came to the United States when they were very young, and many years ago committed a single crime at the low end of the `aggravated felony’ spectrum, but have been law-abiding ever since, obtained and held jobs and remained self-sufficient, and started families in the United States. Although they did not become United States citizens, immediate family members are citizens.

There has been widespread agreement that some deportations were unfair and resulted in unjustifiable hardship.

Criminalizing freedom of the press