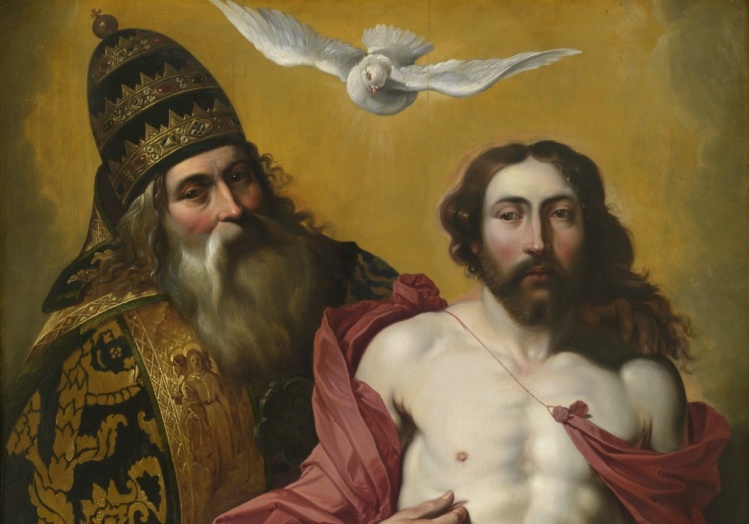 The Holy Trinity by Artus Wolffort

When I was a boy the third person of the Trinity was referred to as the Holy Ghost. I recall not being too keen on doing business with a ghost, however holy he might be. It is now more usual to speak of the “Holy Spirit.” Perhaps this makes him less intimidating for little kids, yet for most of us he is still the “other guy”—a sort of phantom shrouded in mystery.

In the psychology of the Western church, the main drama of salvation is played out between the Father and the Son. It is only at Pentecost, when all has been accomplished, that the Paraclete promised by Jesus enters the scene. The Holy Spirit is presented as depending on the Word for its temporal manifestation as well as its eternal procession. This, in turn, leads us to consider the church as primarily the church of the Incarnate Word—rationally structured, ordered, determined in its intelligibility—and only secondarily “pneumatic.” The Holy Spirit seems almost like an afterthought. In Papal Sins, Garry Wills claims that many of the prerogatives of the Holy Spirit have gradually been transferred to the Virgin Mary—as if an embodied person, one of us, had to replace the Holy Spirit in the role of comforter.

In short, there is a certain malaise in the Catholic Church when it comes to the Holy Spirit. We do not quite know what to say about this nebulous and somewhat isolated presence. It is significant that, at Vatican II, it was the Orthodox observers who pointed out to the council fathers the lack of references to the Holy Spirit in their proposed texts. The texts were revised, but the malaise remains.

The intuitions of the Eastern Churches might be of help to us. “Never think of the Son without thinking of the Holy Spirit,” wrote St. Gregory of Nyssa. St. Iraneus speaks of the Son and the Spirit as the “two hands of the Father,” and the Father always uses both hands at the same time. The Word and the Spirit work together from the very beginning. If it is the Son who gives the Spirit; it is the Spirit who reveals and makes present the Son. At the origin of all things, it is the Spirit who hovers over the primal waters preparing them to receive the creative Word. It is the Spirit who inspires the prophets of Israel and prepares the revelation of the Logos made flesh. It is by the Spirit’s power that the Virgin Mary conceives Emmanuel and God dwells among us. It is the Spirit who manifests Jesus in the waters of the Jordan and leads him into the desert. Throughout his life, Jesus is obedient to the Spirit of his Father. His final act will be the remission of the Spirit to the Father—so that Christ, “abandoned,” might enter into the silence and solitude of the tomb and of hell, and thus shatter the bonds of death. The Spirit will seal this triumph and raise him up on the third day. Finally, it is through the Spirit that the grace of the risen Christ is poured forth on his church.

The Word and the Spirit work together from the very beginning.
sharetweet

It is also the Spirit who transforms the gifts into the Body and Blood of Christ in the Eucharist. When we receive Christ in the Eucharist, we also receive the Holy Spirit. It is the function of the Holy Spirit to make the presence of Christ a vivifying and permanent reality in the church, transforming a community of sinners into the Body of Christ. The Gospel message is not credible—not for others and not for us—unless the Paraclete has first prepared the mind and the heart to receive it. And when, in the silence of our innermost being, we listen to the voice of prayer springing up in our heart, it is not our own voice we hear but that of the Spirit speaking within us, revealing the Father and the Son.

In the Eastern tradition, the Son reveals and sends the Spirit as the Spirit reveals and sends the Son, and both proceed from the Father. Without the Spirit, the Word is mute; without the Word, the Spirit is inarticulate. Both are needed to manifest the Father of Lights. The return to such a tradition in the West might enable us to recover a sense of intimacy with the mysterious Third Person, who is too often discussed impersonally, as if he were just a theological abstraction.

This intimacy would not evacuate the mystery. The Spirit remains discreet and veiled. He is not in the earthquake or hurricane but reveals himself in the light breeze. He is flame, unction, perfume, a dove—insinuating himself in the ordinary. His kenosis, or self-emptying, parallels that of the Son. He is the Father of the poor (Veni pater pauperum) who makes known the presence of Jesus in every person but especially in the powerless, the weak, the helpless. The very nature of his revelation is self-effacement. Yet outside of him there is no truth.