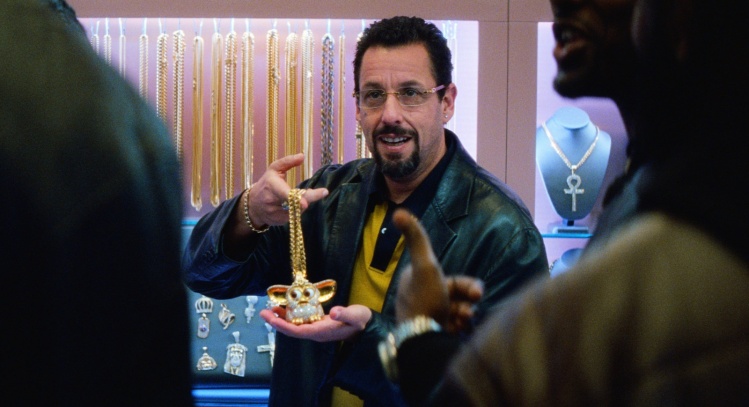 Adam Sandler in Uncut Gems (Courtesy of A24 Films)

A post-Oscar cleanup yields a trio of films blithely swept aside by the Academy—all streamable, and all worth watching. If you needed proof that Oscar nominations are capricious and routinely neglect excellent films, here are three prime pieces of evidence.

First is Nigerian-American director Julius Onah’s closely observed family drama, Luce. Fans of Six Degrees of Separation will note a basic similarity in the story of a charming young black man and his complicated interactions with a middle-aged liberal white couple—in this case, his adoptive parents, Peter and Amy Edgar, played by Tim Roth and Naomi Watts. Luce Edgar (Kelvin Harrison Jr.), a track star and straight-A high-school student, is the very definition of promising. But one teacher is on to his act, or at least thinks she is. Harriet Wilson (played with implacable solidity by Octavia Spencer, who deserved a Best Supporting Oscar nod) becomes alarmed when Luce turns in an essay on the writer Frantz Fanon that seems to glorify violence. Searching his locker on a pretext, she finds contraband in the form of a bag of high-octane fireworks, and alerts the Edgars.

Such minor transgressions normally would present mere scratches in the glossy surface of a kid like this. But Luce has a past. Gradually we piece it together, learning how Peter and Amy adopted him at age seven, from Eritrea, where he was one of the Lost Boys. We don’t get the details—only that turning the traumatized African child into the gleaming all-American boy involved using therapists, tutors, and the whole panoply of resources at the disposal of a professional American couple. Onah’s smart script portrays the real love the Edgars feel for their only child, even as it delivers a disquieting recognition: Luce is their son, yes, but also their project.

Mrs. Wilson’s digging turns up potentially unsavory realities—a friend who is into drugs; a party at which Luce may have been implicated in an incident of sexual exploitation; a mysterious fire. Is Luce culpable? The film keeps us teetering, and at times Luce is presented in Jekyll-and-Hyde terms—now sweetly angelic, now addressing his teacher with vaguely ominous impertinence. The key to the movie lies in its point of view, which is essentially that of the parents; we are privy to their increasingly agonized conversations about Luce, including Peter’s emerging ambivalence about having adopted him in the first place, and finally his bitter implication that doing so was a political vanity project for his wife. As for Luce himself, lacking any glimpse into his heart or mind, we are left to regard him from outside; the fact that he remains the unknowable other—to his white parents and to us—reinforces the picture of structural racism that is the film’s underlying target, and that exists despite, or even within, the good intentions of white liberals like the Edgars. Didn’t they, after all, adopt an African Lost Boy, and help him find himself? Piece by piece, Onah dismantles such complacent reassurances in this fascinating, quietly troubling movie.

A cold wind of nihilism blows through the Safdie brothers’ violent film, and leaves you feeling chilled to the bone.
sharetweet

While Luce depends on subtlety and ambiguity, Uncut Gems has all the subtlety of a punch in the face—plus numerous actual punches in the face. Josh and Benny Safdie’s film immerses protagonist and viewer alike in an experience of sustained misery. The plot could hardly be simpler: Howard Ratner (Adam Sandler), a New York City diamond trader in deep to some very bad guys for gambling debts, attempts to bail himself out. Things go poorly, and then they go worse.

Martin Scorsese is listed as an executive producer, and you can see why he was attracted to this movie, with its nearly continuous explosion of male violence. There is dramatic tension, but it is the tension of unremitting entrapment; nothing changes in Howard or his world except that doom moves inexorably closer. A few forays into his life as a negligent husband and father—one scene portrays a family Passover seder—are mere gestures. Uncut Gems is about watching a man desperately attempting to stave off calamity, and dreading that he will not succeed.

It’s interesting to ponder the challenges facing funny men who attempt serious dramatic roles. Sandler has a seemingly unshakeable comic reputation to shrug off, and he does it, interestingly, by maintaining a comic persona. In Uncut Gems he’s smiling almost all the time—nervously, and into the very teeth of terror. He’s joking while Rome burns, and he knows it. That ever-ready smile registers somewhere between a New York City brashness, a pitchman’s tactical optimism—and, finally, pure desperation, a panic-driven grimace deployed to reassure others and himself. The Safdies have crafted a Scorsesean take on Arthur Miller; it’s Death of a Salesman meets Goodfellas.

This is the kind of flawed movie that stays uncomfortably in your mind afterward. There’s an underlying anti-humanism to Uncut Gems, a semi-covert tilt toward the absurd—not tonally, but existentially. The film’s opening sequence takes place far from New York, deep in an African mine, where gaunt laborers discover a gem that eventually, transported halfway around the world, will figure in Howard’s effort to save himself. The scene nods at the famous prologue to The Exorcist, where the priest played by Max von Sydow, digging in an archaeological site in the Mideast, unearths a relic that portends the demonic nightmare to come. Here the unearthed object has the opposite valence, serving both as talisman and treasure in Howard’s plan. But his hopes founder, and the Safdies mine the gem cinematically, as it were, for an unexpected visual sequence that takes us deep inside the molecular structure of gems and humans alike, in a phantasmagorical montage reminiscent of the surreal sequence in Terrence Malick’s The Tree of Life. This visual conceit couldn’t be more remote from the gritty urban realism of the film itself, and the drastic shifting of gears startles, as if to remind us that the absorbing dramas we fixate on—whether in a movie, or in our actual lives—have less importance than we like to think, and that everything is mere material, subject to implacable processes of entropy. A cold wind of nihilism blows through the Safdie brothers’ violent film, and leaves you feeling chilled to the bone.

German director Christian Petzold’s Transit is a strange and gripping film about refugees in Nazi-occupied France that centers on a confusion of identity. In all respects but one (and it’s a big one), Petzold follows the 1944 novel of the same title by Anna Seghers, a German Jew who fled the Nazis to Paris, then further to Marseilles, before escaping to Mexico. Her novel, set in Marseilles in 1942, recounts her experiences there, and the movie follows suit. In wartime Paris, with the Nazis about to occupy the city, a refugee named Georg (Franz Rogowski) is asked to deliver a letter to a writer, Franz Weidel. Arriving at the writer’s apartment, he finds that Weidel has committed suicide—leaving behind some letters and a manuscript. Scooping it all up, Georg escapes to Marseilles, where he attempts to determine his own future while interacting with assorted other refugees: a family of North African immigrants whose young son Georg befriends; a doctor trying to get to Mexico; and Weidel’s semi-estranged wife, who is unaware that he’s dead.

Without telling the wife, Georg assumes the dead writer’s identity—to facilitate an exit visa, but also, one senses, for more obscure reasons. Many of the story’s pieces remain un-filled-in. Why is the seemingly nonpolitical Georg fleeing? What did he do? Is he a Jew? In the one big departure from the novel, Petzold takes these World War II events and transposes them onto contemporary Europe. This creates obvious problems. If we’re in the France of today, are these the same Germans, the same Fascist party, somehow resurrected? Is Hitler out there somewhere? Why do we never see any Nazis? Why do the clothes look like the 1940s, but the vehicles like 2020? Some viewers are likely to get hung up on these incongruities, and one wonders why Petzold didn’t just set his wartime drama historically, as in his last film, Phoenix.

My guess is that the heavy visual burden of Nazi symbology—the swastikas, the uniforms, Hitler himself—forms an encrustation of particularity that Petzold wished to do without, in order to proceed with less impediment to the more universal story: the plight of refugees. Transit acutely evokes the drifty, disorienting non-existence of the stateless: the agonized waiting; the caprices of bureaucratic whim; the abiding dread of being dismissed as a non-person. In Marseilles, fates are juxtaposed with cruel proximity. The fortunate sit eating in a café, while others are hauled away screaming by police. A woman who runs out of options suddenly leaps to her death from a scenic rampart. The city of refugees mixes hope and desperation; anxiety, boredom, and sudden explosions of despair; acts of quiet heroism and of crass betrayal. And the ubiquitous shame of watching others be taken away—and feeling mostly relief.

Profoundly gloomy, Transit contains moments of poignant beauty, as when Georg sings a childhood lullaby to a young boy named Driss, a song that his own mother—about whose fate we know nothing—once sang to him; it evokes a world of tenderness and security now utterly lost. It’s surely no coincidence that Driss and his family, like so many refugees in today’s Europe, have a North African background. Nominally backward-looking, Transit has its gaze set equally on our twenty-first-century crisis, using a historical trauma of statelessness to raise an ominous reminder. Something like this could happen again. In some respects, it already has.