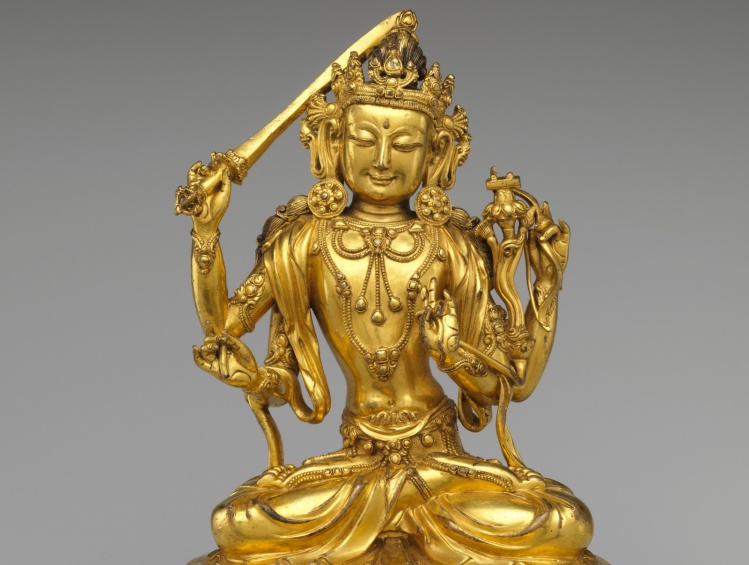 For most of recorded history, political power and religion have been closely interwoven. The establishment of religious authority, the centralization of religious discourse around politically ordained figures, even forced conversion as an aspect of war—these were long seen as vital functions of government.

This was true in most times and places, but truer in some than in others. Until very recently, it was especially true in Tibet, where, as Sam Van Schaik writes, “the ideal government was a union, not a separation, of Church and State.” Since the seventh century, Tibet’s rulers have been considered divine emanations in the world—from the first godlike tsenpos to the many configurations of monks, lamas, and priests who intrigued, waged war, and maintained traditional hierarchies until the fourteenth Dalai Lama fled to India at the end of the 1950s. Even the tyranny of the Chinese Communist Party has had trouble severing this link between divine and temporal power in Tibet.

The centrality of political power to the history of Tibetan religion is one of the central themes of the Rubin Museum’s excellent “Faith and Empire” exhibition (on view till July 15). Buddhism arrived in Tibet in waves, gathered from the edges of the empire in Nepal and Kashmir, or sought out by monks and scholars who traveled to India in search of both tantric masters and sacred texts, eventually amassing one of the greatest collections of Buddhist literature in the world. The teachings they received explicitly linked the worlds of religion and politics, treating the ruler as a sacral figure who spread Buddhism through imperial expansion. First with tsenpos and later lamas, Buddhism justified and maintained the stratification of Tibetan society, ensuring a continuity of aristocratic rule.

The same tantric scriptures also elevated wrathful deities like Mahakala to the status of Buddhas, ascribing powers both spiritual—the fearsome clearing of obstacles to enlightenment—and explicitly magical. Many-armed, coupling with their consorts and dancing atop dead bodies, their belts full of severed heads, these demons and spirits gain some of their power from the pre-Buddhist Bon religion, whose everyday spells for growing crops and preventing hail have been part of Tibetan life since before written history. These powers were frequently employed for political or martial gain, poisoning one’s rivals or cursing foreign armies. Few ruled without them.

The Tibetan empire lasted only about 250 years, but many subsequent generations of monks, teachers, and lamas lent their religious authority to the political powers that surrounded them. Tibetan Buddhism had a prominent, even privileged, place at a series of Imperial courts, from the Tanguts to the Mongols to the Qing. While these rulers desired allegiance and tribute, they also relied on Tibetan magic for political success. When Chinggis Khan besieged the Tangut capital in 1210, its imperial preceptor, a Tibetan lama, appealed to Mahakala, who is believed to have flooded the Mongol troops by bursting their dams. This display so impressed Chinggis’s son Qiublai that he later chose to be inducted into the tantric mysteries by a monk named Phakpa, and made Tibetan Buddhism the foremost religion of his empire. Mongol warriors painted their helmets with mantras and powerful deities to protect themselves and destroy their foes, and also marched into battle with banners depicting deities. The later Manchu even used Tibetan beliefs to connect themselves, via reincarnation, with earlier dynasties.

Tibetans in turn used foreign military power to resolve domestic religious disputes. Phakpa returned home with a small army to drive his Kadampa opponents out of power. The Gelug, or yellow-hat, sect—which most people outside of Tibet likely have in mind when they think of Tibetan Buddhism—used a series of civil wars to suppress their Ningma rivals. Even the story of the Dalai Lama is one of repeated foreign intervention.

The march of time on display in this exhibit does make you wonder about the fragility of our own social order, and religion’s place in it.
sharetweet

Tibetan art can be a challenge for non-initiates to decipher. The paintings on display at the Rubin are densely packed with Buddhas, Bodhisattvas, teachers, offerings, and entourages of deities both benevolent and wrathful. But once you pierce through the iconography, the underlying structure remains remarkably consistent: a central deity or adept poses atop a lotus throne, with his teachers above, an entourage around the center, and mystical protectors toward the bottom. There are many variations of this scheme, from the orange flames that mark black-background paintings of wrathful deities, to the postures, hand gestures, and consorts that attend the many, many tantric practitioners celebrated by Tibetans—but this central structure remains legible.

When Lobsang Gyatso installed himself, with Qoshot Mongol support, as the Fifth Dalai Lama in 1642, he commissioned works in these traditional formats to secure his legitimacy. In one particularly striking example the Dalai Lama, framed by golden prints of his hands and feet, meditates below his previous incarnations, who include both the Bodhisattva Avalokiteshvara and Songtsen Gampo, founder of the first Tibetan empire. This painting and others around it employ all the conventions of religious art for expressly profane ends, establishing both sacral power and political legitimacy and explicitly aligning the upstart ruler with an aristocratic legacy. Religion, power, and magic all mingle on a single plane. Lobsang and his government spread this message far and wide via woodblock prints and polemics, many of them written by the Dalai Lama himself. Lobsang built a new palace on the hill where Gampo’s had once stood and named it Potala, after the mountain home of Avalokiteshvara. And he employed the magic of deities like Vajrabhairava to demolish his political enemies.

Other powers, like the fractured Mongols, found in Tibetan Buddhism the cure for their own decline. Backed into one niche is a staggering gilt-bronze statue of Maitreya, the Buddha of the future. Sculpted by the seventeenth-century artist and monk Zanabazar, this statue is all lithe curves and supple gestures. It was cast for an annual festival in celebration of Maitreya, whose arrival many Mongols believed would herald both a Buddhist golden age and a return to the heights of the Mongol Empire.

This expectation reached a new pitch of intensity under the Qing emperors. Reacting to revolts from Christian and Muslim groups, as well as invasions from northern India, the Manchu spread the legend of Shambhala, an end-times city hidden deep in the Himalayas from which miraculous legions would emerge to vanquish the enemies of Buddhism. Eager to be reborn in Shambhala and so help usher in this imminent golden age, many Mongol notables built temples specially dedicated to the apocalypse. Paintings on their walls depicted the legendary city as a paradise tucked away within concentric rings of sky-high mountains. The city opened only to admit a miraculous host of men, animals, and fearsome spirits onto a vast and grisly battlefield, where, blessed by cloud-borne deities and Bodhisattvas, they would eliminate the enemies of Buddhism for all time.

A sort of apocalypse did eventually come, but not the kind they were expecting. In the 1930s, Mongolian Communists, with support from the Soviet Union, waged a campaign of terror against “reactionary elements,” killing over 17,000 lamas and destroying hundreds of temples. The few surviving structures functioned as Potemkin Potalas, on view for foreign dignitaries in a country where all religion had been violently suppressed. A visitor to modern Ulaanbaatar will find few outward signs of the city’s illustrious religious past, and you have to wander through blocks of cracking Soviet concrete to find them. A few objects are housed in buildings that survived as monuments to barbarism, like the divination swords and shamanic masks that rest in the chilly confines of the Choijin Lama’s former temple. Monks brush across the grounds of the Ganden Monastery, in whose central cinderblock temple worshippers spin prayer wheels as they circumambulate an eighty-two-foot Avalokiteshvara. Down the scalloped mud road, shamans conduct their rituals in a small group of “gers” (the Mongolian word for yurts).

Since the official recognition of religious freedom in 1990, close to two hundred temples, operated by several hundred monks and nuns, have reopened throughout Mongolia. The rebound has been slow, in part because Buddhism has lost its established status. Its return has been financed by neither tax levies nor a Khan’s largesse. This is probably not something to lament.

The march of time on display in this exhibit does make you wonder about the fragility of our own social order, and religion’s place in it. After centuries of working in concert with religion, empire turned against faith in Mongolia and Tibet—and came close to exterminating it. Removed from the public square, Buddhism lived on in the continued private religious practice of regular Mongolians, whose beliefs defied the government’s rigid dogma. Perhaps that is also how faith will survive in an increasingly secularized West—private if not secret, stripped of the imperial prerogatives it once enjoyed, no longer tempted by the fruits of domination.

Robert Rubsam is a writer and critic from New York’s Hudson Valley, and a current MFA student at Columbia University. You can follow him on Twitter at @rob_rubsam.