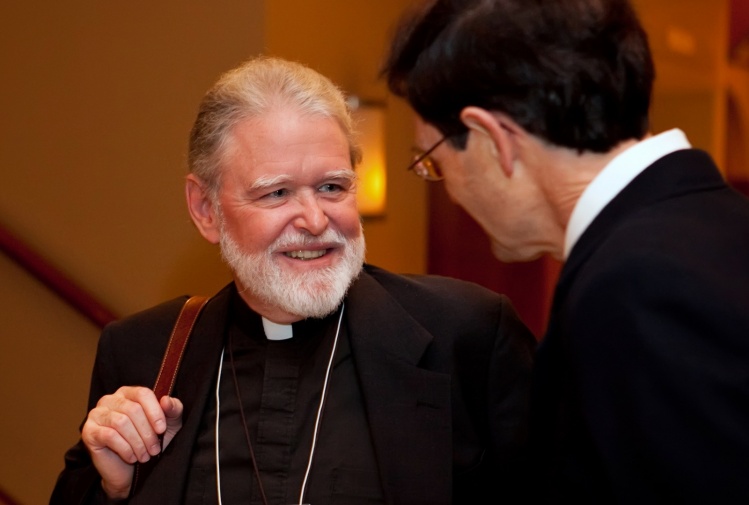 When Regina Garvey phoned to say that John had died that morning, I was speechless. I heard my voice repeating so sorry so sorry so sorry, but my mind was scarcely functioning. Days later, words continue to elude me.

Born in 1944, three years before his father and an uncle founded the small but distinguished publishing house, Templegate, John Garvey was twenty-nine when he began writing reviews and articles for Commonweal. Five years later, when I returned to the magazine as executive editor, I asked him to become a regular columnist.

Actually I also asked him to consider joining the staff in New York. He cheerfully and instantly brushed off the offer, content with his life in Springfield, Illinois, married to his high-school sweetheart, the father of two young children—and anyway wasn’t New York City Babylon?

What Commonweal could not do, John’s evolving faith did. In December 1984, he informed readers that he had become a member of the Orthodox Church, “the result of some twenty-one years of moving in that direction. When I first discovered Orthodoxy I found that I had no doctrinal disagreements with it, whereas I did with Catholicism…. Over the years I found in Orthodox spirituality and liturgy something which I could find nowhere else, something I need…. This was not a matter of leaving Catholicism, which I love, but a matter of becoming Orthodox. If it were not for the existence of Orthodoxy I would gladly remain a Catholic until death.”

Several years later John first decided to pursue the study of Orthodox theology at St. Vladimir’s Seminary in Yonkers, New York, and finally chose to be ordained. Only in America: An Irish-American, Roman Catholic, Notre Dame graduate from the Midwest ends up as pastor of St. Nicholas Albanian Orthodox Church in Queens, New York.

Throughout that assignment and others, John continued his writing, three hundred and forty-one articles for Commonweal over four decades as well as occasional articles for other journals and four short books. In 2000, his wife Regina became the administrator of Commonweal’s three-year study of American Catholics in the Public Square.

John’s columns were gems of the plain style: conversational, first-person, direct, without elaborate metaphors or clever categories. He had a rare capacity for conversation, and especially for listening. In his columns, he introduced people from his pastoral experience or from the rest of his everyday life: “I once knew a man who….” Or, “A woman who sat next to me on a four-hour bus ride….” Where many columnists dwell on the world’s wholesale miseries, John went retail: the loss of a loved one, or of love, or of faith, or of purpose.

“On the day the news reported rumors that Jerry Brown and Linda Ronstadt were heading for a nudist colony in Africa,” he began one of his early columns, “I met a man who had left his job as mechanic in a small town and moved, with his family, to be near the hospital where his twelve-year-old son was being treated for a brain tumor. He had no money and his car was stalled. We were going to get it started again with jumper cables…. He was patient nearly beyond belief…. At the center of his life was this heartbreaking, perhaps hopeless thing.” And, yes, there was a connection between the attention we give, often of necessity, to “newsmakers” like Jerry Brown and the man patiently trying to cope with a wrenching reality.

John wrote about our self-delusions, especially of control and autonomy, and our ways of propping them up: therapeutic clichés, media clichés, conservative clichés, liberal clichés. A favorite theme was the confusion of faith with certainty. Believers could turn anything, including Jesus, into an idol to be manipulated to serve their self-interested purposes. Nonbelievers could equate all faith with fundamentalism and ignore their own certitudes.

John’s columns—at least in the years before the editors put tighter word limits on columnists—were spiked with hilarity. Writing of appeals to “get in touch with one’s feelings,” John reported that he had tried, but “they were out so I left a note.” Lamenting the mental befogging of our culture, John remembered a university job repairing academic jargon “that came by our desks by the barrelful.” A proposal for a program called “Human Development Counseling” bravely announced, “The process of human development, according to [recent studies], can be both constructive and destructive.”

“I wrote in the margin,” John recalled, “‘Let’s make sure this knowledge doesn’t get into the wrong hands.’” He also decided, “I should think about quitting.”

For many years after their son and daughter had moved to the other coast, Regina brought hors d’oeuvres and John his storytelling and infectious laughter to our dinners at Thanksgiving, Christmas, and—thanks to the difference with the Orthodox liturgical calendar—almost every Easter. Once he and Regina retired to the Northwest to be closer to children and grandchildren and live on their modest resources, John and I marked all those holidays with hour-long phone calls trading hilarious illustrations of the Downfall of Humankind.

That hilarity was streaked with melancholy, however. In an unusually personal column last July, John mentioned his serious childhood illness and the deaths in his family that had contributed to a prolonged “mix of depression, anger, fear, and anxiety…. I lived as if I were a clenched fist.” Ultimately he was blessed with a recognition of his own brokenness, one that it wasn’t in his control to mend.

“You have to turn from yourself to something outside yourself, hoping it will be gracious,” he wrote. “This is where the Christian story matters so much—we see in Jesus what the God who called us forth from nothingness is like. I know now that I can’t be without him.”