'Not All Religious Learning Happens Explicitly' 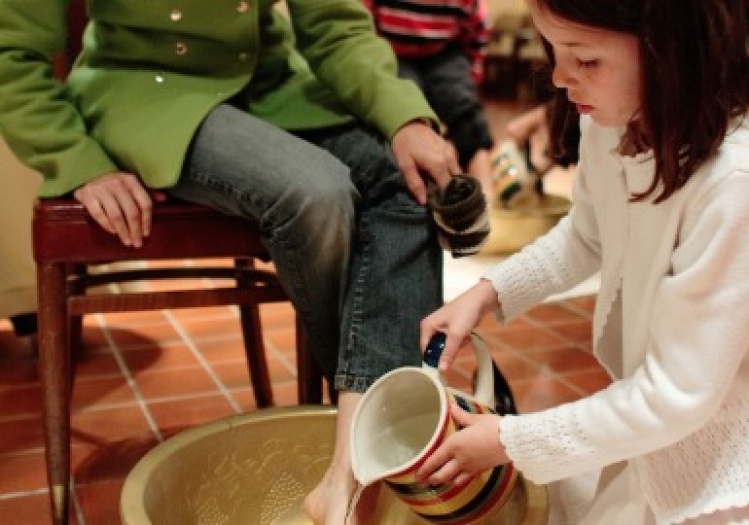 “Hope has two beautiful daughters,” St. Augustine remarked. “Their names are anger and courage; anger at the way things are, and courage to see that they do not remain as they are.” The preceding essays, from parents concerned about keeping their children in the faith, display both anger and courage. Anger shows itself as displeasure with the prevailing culture and the obstacles to God that it places in our path, but also with the church itself, and its seeming inability to provide adequate intellectual undergirding for the development of faith. Courage underlies the deliberation with which these parents are constructing their lives to secure a Catholic home that might withstand the tests of postmodern living—doing so in the hope that their children might grow to be adults whose faith is integral to their very being.

I understand how difficult this can be. I happen to have two lovely daughters, both of them moral, compassionate, and responsible young women. My husband and I raised them in the church and sent them (this was in the 1980s) to Catholic elementary school. They both went on to public high school and subsequently chose to attend Catholic colleges. We went to Mass regularly, celebrated all the Catholic holy days, and expected that our children would do the same and remain in the pews for the rest of their lives. Though we had some conversations about matters of faith, we didn’t talk often about being Catholic or what that meant. It was simply who we were, as constitutive of our identity as being American.

So it came as a bit of a shock when our younger daughter, during her college years, simply stopped going to Mass. Attempts to discuss this change were not fruitful: “Church doesn’t mean anything to me anymore,” she would say, or simply “I don’t want to talk about it.” I was perplexed, but came to the realization that trying to impose my own spirituality on my daughter would not succeed. After berating myself on my failure as a parent to keep my child in the church, I finally learned, with the help of some friends, to place the situation in God’s hands.

In the years since our children were young, I have pursued graduate work in religious education, for the past twelve years serving as director of religious education in a suburban parish. In that capacity I would like to offer some observations about the role of family and parish in the nurturing of the faith.

The family is the first teacher. Children need boundaries and loving discipline, a sense of security reinforced by the rules of the household. They also need to know that they are good, and to be able to recognize the good in others. The role of a parent in fostering the child’s understanding of the inherent goodness of life cannot be overstated. The deep knowledge that a child is loved contributes crucially to that child’s emotional stability, according to the psychiatrist Robert Coles, who writes about the spiritual life of children. The spirituality at the heart of each child cries out to be nourished; helping children develop their imaginations and sense of wonder through play and creative projects will go far in this regard. “We grow morally as a consequence of learning how to be with others,” writes Robert Coles, adding that this is “a learning prompted by what we have seen and heard.” Children learn by osmosis, noting the ways in which parents themselves interact. “The child,” Coles notes, “is an ever attentive witness of grown-up morality.”

Religious growth, including Catholic formation, needs to be understood within this context. A child’s image of God begins as a reflection of his or her parents—a fact that ought to make parents consider carefully just what image they are providing. The most effective teaching strategy is modeling. Part of this means bringing children to Mass, participating in the responses and singing, and being fully engaged in the liturgy—making the Sign of the Cross, kneeling, bowing, and all the various gestures involved in the liturgy. Not only do these bodily movements make the Mass seem more interesting to a child, but they result in a different type of knowing. Not all religious learning happens explicitly. Family rituals, having meals together, and enjoying family gatherings all serve to strengthen the bonds of love and offer opportunities for informal religious formation.

The evident anger of some of the contributors to this symposium toward the prevailing culture, with its permissiveness and moral relativism, clearly fuels their resolve to raise their children in a Catholic milieu. Yet one cannot avoid that culture altogether, and perhaps engaging with the larger society and embracing some of the good it has to offer can help children learn a few important things that the church itself teaches: that the world is a good place; that God’s love is available to all; that people fail and can be redeemed; that we are all human and no one is beyond the grace of God.

That this effort is necessarily a collaborative undertaking between the generations raises another important point. Instead of trying to cram our children’s heads full of information about their faith, it might be more helpful to create an environment in which adults acknowledge that we learn as much from our children as they do from us. That doesn’t mean parents aren’t in charge; it simply means that children possess the qualities of radical trust and openness—and a joy in living—that are essential to the building of the reign of God.

Certainly, the church places obstacles in our way as we seek closer union with God. Differences of opinion with church teaching on particular matters; horror at the pedophilia scandal and cover-up; a frustrated sense of being voiceless in the greater church: for these and other reasons many have stopped practicing the faith. The truth is that throughout history the church has taken some stands that turned out to be erroneous and, as a result, has caused much suffering. Acknowledging these failings to a child can help spur her to understand that she can be flawed in the way all human beings are flawed and still be redeemed. Similarly, while it’s fine to provide role models for children from Scriptures (please include some women!), one should always acknowledge the humanity of the biblical protagonists. The Gospels are filled with stories in which human failings are forgiven and the person is restored to wholeness. Children need to know that being a Christian doesn’t mean being perfect, but—as Peter Leibold and Liz McCloskey point out in their essay—it does mean being forgiven.

As a church we often think of religious education as merely the catechizing of children; as a rule, we ignore the continuing formation of adults. In fact, the most effective religious education occurs when catechesis is tied to the liturgy. Ours is an adult faith, and the formation of children ought to be geared toward what they need to understand in order to participate fully in an adult church. And adults need to be educated to better appreciate the beauty of our tradition. The theological background of the authors of these five essays is highly unusual in most parishes, and helps explain their desire to create a Catholic ethos in their homes. Their expertise in Catholic matters prompts me to urge them to consider sharing their knowledge and faith with the religious-education programs in their parishes (some already do) by volunteering as catechists for either children or adults. Teaching can be spiritually enriching for the catechists themselves, and it can keep you in the whirl of parish life—which is the church to most Catholics. It is here that children and adults can learn to be a community. And it is in community that we become most truly ourselves.

So much of the work of a parish is not explicitly religious in a strict sense of the word. Parish life exemplifies our interdependence. In peer groups we make connections that teach us about ourselves, others, and God. We worship with others in our community and feel lifted up when we proclaim the prayers and sing the familiar hymns together. Ideally, we are engaged both intellectually and emotionally during Mass. All of this contributes to our becoming whole—and, therefore, holy.  Religious education, in the end, is all about becoming whole. It is about informing people, of course, but also about forming them, teaching them to live well and preparing them to die well. It is about engaging the mind, the emotions, and the senses in a lifelong journey with and toward God. As Christopher Roberts writes, it is about letting “tangibly Catholic love shape and leaven all of life.”

Clearly the authors of the five previous essays are serious Catholics using their education and resources to raise their children as best they can. Each has the desire to instill in their children a love of the faith—and each worries to some degree that the faith might not “stick.” My best advice to parents like them: become an active part of a parish where you feel at home, where you are both comforted and challenged. If you are in such a place, your children will benefit as well. You can take some of the weight off your shoulders by recalling that you are not your children’s only mentor; the community to which they belong is constantly teaching them. Meanwhile, teach your children about the faith, but don’t try to burden them with things beyond their ken. Find a community of peers to walk with you on your journey of faith, as Sidney Callahan suggests. Try to live your faith in a way that makes it truly attractive and credible to your children, in the words of J. Peter Nixon. Do your best, then leave room for the Spirit to work. And remember that no one has all the answers. So relax a bit.

As Augustine understood, our anger at the way things are and the courage with which we work to make sure they don’t stay that way are both signs of Christian hope. We hope that our children will find their way, that our efforts to nourish their faith will not have been in vain, and that, as Liam Callanan writes, “grace will help them through”—and perhaps lead them back, as it did my daughter when, at a recent Saturday evening Mass, she slipped into the pew next to her father.

Eleanor Sauers is the director of religious education at St. Anthony Parish in Fairfield, Conn., and teaches at Fairfield University.