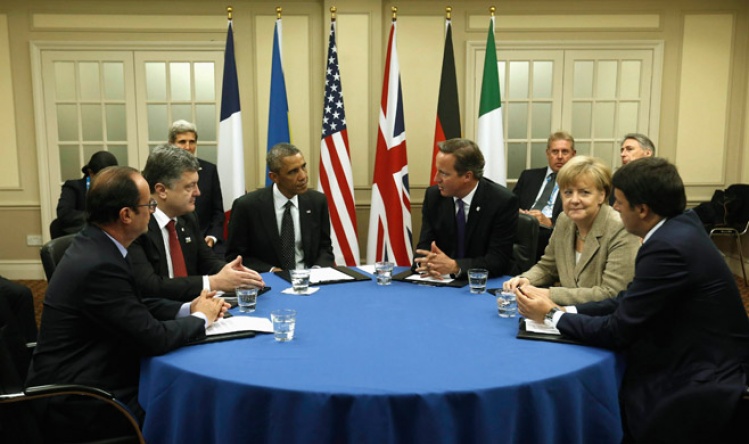 Britain, Germany, and France are all posting signs of dissent in the West. Last week Barack Obama’s White House found two good reasons to angrily criticize the British government, its most faithful and docile ally and client in the post–World War II period. This was perceived by some in the press as evidence of the weakening of that “special relationship” that has prevailed throughout the twentieth century.

The United States has always found this relationship flattering, convenient, and inexpensive, as it was paying next to nothing for services rendered, including Britain’s being first in line to dispatch solders on missions primarily of interest to Washington. The exception was Vietnam, when Lyndon Johnson begged in vain for London to commit as little as “a damned company of the Black Watch” so that the war would appear to be an international crusade of democracies against Communism. The British sensibly said no.

The poodle has recently taken to biting its master, a bad sign despite the British press’s habit of calling the United States “the UK’s most important strategic partner.” Master bit back in March when a White House official deplored London’s “constant accommodation of China,” which has been going on since 2013, when Britain began cultivating Chinese trade and investment. The remark was occasioned by Great Britain’s decision to join the Chinese-sponsored Asian Infrastructure Investment Bank, a potential rival to the international financial institutions controlled by Washington—for example, the World Bank and the International Monetary Fund. Germany, Italy, and France have just announced that they too will join the AIIB.

Britain, together with nearly all the other major European NATO members except Poland, has also been reproved by Washington for failing to spend more than 2 percent of its GDP on defense. How can NATO frighten Russian President Vladimir Putin into giving up Crimea and eastern Ukraine if it spends only 2 percent of GDP on its armies and navies? Britain’s once-robust military is fading, while, for historical reasons, Germany still restricts its military mostly to humanitarian or peacekeeping missions.

For the same historical reasons, Germany has long practiced a reserved diplomacy, in simple support of the Western Alliance—meaning the United States. But under Chancellor Angela Merkel, who grew up in what was East Germany and speaks Russian. Meanwhile, Germany has taken the European initiative in dealings with Russia and its president. Germany’s relations with Washington have suffered since the revelation of the U.S. National Security Agency’s comprehensive interception of Merkel’s communications, including those conducted on her personal telephone. In Germany, this was considered a kind of treachery, though the Obama administration tut-tutted that this sort of thing was normal in relations among allies (as it is, on the U.S. side) and that Merkel was not being a worldly stateswoman and a good sport.

Then came the U.S.-backed coup d’etat in Kiev, followed by President Putin’s takeover of Crimea and a bloody little war in eastern Ukraine that has produced more than three thousand casualties. In the face of tough talk from the White House and the Pentagon—and with Republicans in Congress demanding new arms shipments for Ukraine and an escalation of the conflict—Merkel collected French President Hollande and headed to Minsk to see Putin and negotiate a truce.

There is new dissent in France as well. French Foreign Minister Laurent Fabius has just angrily announced that France rejects Secretary of State John Kerry’s recent suggestion that relations between the West and the Assad government in Syria might be normalized.

All these developments clearly reveal deteriorating transatlantic relations. The emergence of the Islamic state from the chaos in Iraq, Syria, and Libya; the continuing tension with Iran; and the sinister turn events have taken in Israel and Palestine are all widely attributed in Europe to American irresponsibility and adventurism. The time has perhaps come for Washington to consider that Europe might declare its independence. That possibility is already being discussed on the Continent.

The Battle for Egypt