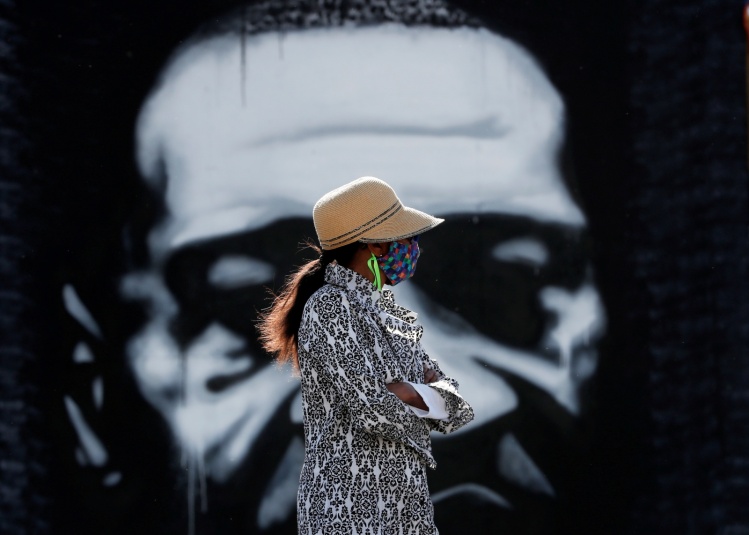 A woman in Minneapolis looks at a memorial for George Floyd June 14, 2020. (CNS photo/Eric Miller, Reuters)

“Peaceful protest”—these words dominated headlines as thousands of American citizens took to the streets in cities across the country demanding justice for George Floyd. Every commentator, from Barack Obama to local faith leaders, urged the protesters to remain peaceful. Their warnings made me think of the college students I regularly teach in a course called “Peace and Protest,” where we read texts defending and critiquing nonviolence. My students’ reactions make me question why we’re always so intent on “keeping the peace.”

For many Americans, of course, the ideal peaceful protester is Martin Luther King Jr. But even King’s nonviolent tactics weren’t always universally applauded. His “Letter From a Birmingham Jail,” written in 1963, recalls how local officials described King and his fellow black Christian leaders when they traveled to Birmingham to join demonstrations against segregation: “outside agitators.” Southern white religious leaders likewise criticized King and his allies for their civil disobedience, on the grounds that such tactics provoked violence. Those same critics also praised the police for maintaining “law and order”—even as officers unleashed violent attack dogs and beat nonviolent protesters after arresting them.

My students find a lot to admire in the 1960s civil rights activists, whose courage and willingness to suffer police brutality without retaliating are certainly inspiring. Still, they are also persuaded by Ta-Nehisi Coates’s skepticism regarding nonviolence. In his book Between the World and Me, written just after the acquittal of the officers who’d killed Michael Brown in Ferguson, Missouri, Coates recalls growing up as a black boy in 1980s inner-city Baltimore. He remembers seeing videos of civil rights “heroes”—black people knocked down by fire hoses and beaten with clubs in the streets. “Why were only our heroes nonviolent?” he asks. The morality of nonviolence, he concludes, is only—and unfairly—expected of people of color.

Coates’s question exposes a double standard that we see playing out again today. The American public demands peaceful conduct from citizens, even as they protest the extrajudicial killing of unarmed black men and women. These same protestors belong to communities oppressed for decades by police brutality, racism, and white supremacy. Handling the protestors—ensuring that they remain “peaceful”—are police and National Guard forces, armed with military-grade assault weapons, firing into crowds with rubber bullets and tear gas, and physically wrestling unarmed people to the ground.

Supposedly, these violent tactics are justified by scattered instances of property damage. But there is an undeniable power differential here, and an obvious hypocrisy: this country demands respect for private property—which symbolizes its capitalist economy—while training and arming police to use lethal force against private citizens. In the eyes of the American state, in which capital is backed by military force, the lives of black and brown citizens are deemed expendable, less worthy of protection than storefront windows. The White House has made this cruel logic explicit: President Trump has threatened to send “thousands of heavily armed soldiers” to “dominate the streets” and “protect the rights of law-abiding Americans.” The very law-abiding, white citizens who, mere weeks before, brandished assault rifles and handguns outside state capitals to intimidate public officials trying to save lives in the midst of a pandemic.

If peaceful protest is to be more than a byword of the white power structure in this country, all Americans must hold our elected officials and police forces to a rigorous standard of peace-keeping that does not harm, threaten, or intimidate. We cannot simultaneously demand nonviolence from the oppressed while also allowing law enforcement officers—deputized by the state—to commit murder in the name of public safety or “law and order.” If we are to speak credibly about justice and peace, we have to practice what we preach, as Jesus did. Openly carrying arms bears false witness to our Christian commitment to peace—and to the inviolable dignity of human life.

There are immediate actions we can take to address the national unrest over police brutality and racism, and they do not include deploying the National Guard. Bringing charges against former officer Derek Chauvin and his three former colleagues, all responsible for George Floyd’s death, is a good first step. But systemic problems are larger than these four individuals. Justice demands that police training be overhauled in favor of nonviolent conflict resolution. Stand Your Ground laws must be overturned. The Black Lives Matter movement is right: we must defund—and demilitarize—the police.

Undertaking these reforms is our responsibility not just as American citizens, but also as people of faith. Our tradition, through the mouth of the prophet Isaiah, proclaims our duty to practice nonviolence without equivocation or compromise: “They shall beat their swords into plowshares and their spears into pruning hooks; One nation shall not raise the sword against another, nor shall they train for war again.” The protestors are right: “No Justice, No Peace.” May we commit ourselves anew to building a just peace—and bringing about the Reign of God—through our witness of nonviolence. 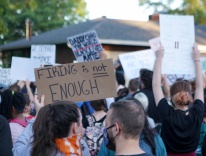