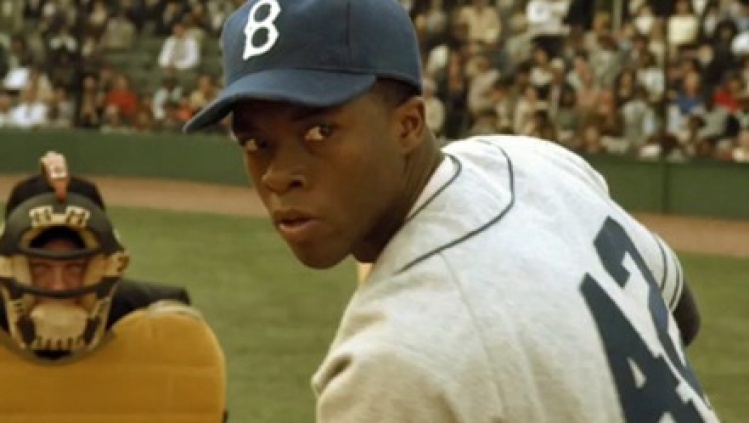 When historical events fall into line with Hollywood’s eternal quest for easy thrills and easy tears, the result can be a movie like 42. The story of how Branch Rickey began the integration of major-league baseball by hiring Jackie Robinson to play for the Dodgers lends itself naturally to the big screen by offering a stark confrontation of goodness with the evil of racial bigotry. Some critics have complained that the film’s portrayal of Robinson lacks psychological depth, but 42 isn’t a cradle-to-grave biopic. It deals with a single course of action in a single year (1947). There’s no need here for psychological probing, and to introduce moral ambiguities into this story would be as much of a falsification as to withhold ambiguity from a movie about the causes of the Vietnam War.

The real artistic challenge for writer-director Brian Helgeland was to avoid merely coasting on the obvious sentimental opportunities inherent in this true story and to capture the reality of a time when a certain American goodness and a peculiar American evil clashed with a gratifying outcome. The period recreation is convincing without being fussy (though the golden-brown tone of Don Burgess’s photography is a little too nostalgic for my taste). We find ourselves back in an era when men wore hats, jackets,  and ties to the office, and there weren’t any dress-down Fridays; when radio announcers like Red Barber (nicely impersonated here by John C. McGinley) translated baseball action for TV-less homes via sentences of Jamesean sinuosity; when a black couple could be bumped from a plane because the wife entered a “whites only” bathroom; and when a team manager, Leo Durocher (played by a dangerously simmering Christopher Meloni), could be suspended for adultery, while another manager, the Phillies’ Ben Chapman (limned with putrid, slack-faced veracity by Alan Tudyk), got away with using obscenely racist language in public. With the historical context so firmly established, you understand how courageously disruptive Rickey’s decision was, and how much courage Robinson needed to be the instrument of change. And you are also forced to realize that this period of custom-bound inequities wasn’t ready for the bravura of a Muhammad Ali but could accommodate only the tacit resistance urged on Jackie by his boss: to have “the guts not to fight back” when taunted, beaned, or spiked.

Playing a man on a taut emotional leash, Chadwick Boseman as Robinson compels the camera to stay close to him, so that we can read his internal struggle. Praising the actress Teresa Wright, James Agee wrote of her ability to use her face “with delicate and exciting talent…and with something of a novelist’s perceptiveness.” Boseman too has this kind of fine-grained talent. The muscles in his face speak the anguish and fury he’s forbidden to utter, and he also conveys something darker within the hero’s personality, hidden under layers of civility: a wariness of humanity in general; a frustrated, impossible yearning not to be dependent on anyone’s good offices. Such a man can become the victim of his own suppressed anger (Robinson died young), but one scene lets that anger loose. Walking into an unoccupied corridor after a soul-shredding round of racial epithets, Robinson shatters his bat, screams, and drops to his knees, quivering with rage. It may be the most volcanic emotional explosion since Jack Nicholson unloaded on that unfortunate waitress in Five Easy Pieces. Though the script refrains from exploring psychological depths, Boseman’s fine performance suggests them.

Much more extroverted roles fall to Nicole Beharie as Rachel Robinson and Harrison Ford as Rickey. The former is unavoidably stuck with the familiar tropes of any supportive-wife character, but she seizes every opportunity in the script (and Helgeland does provide them) to convey loving mischievousness and unbreakable strength. She’s too smart and too sexy to allow her character to drift into dreary “credit to her race” territory.

During the first fifteen minutes of the movie, I was afraid Harrison Ford had turned Rickey into a scenery-chewing stunt. But gradually it becomes evident that it is Rickey himself, as Ford has imagined him, who is using his Dickensian tics—the cigar brandishing, the smiling snarls, the biblical injunctions laced with mild profanity—to persuade, intimidate, or jolly along everyone he has to deal with. This is an appropriately grand portrait of a supersized man.

Though every actor in the supporting cast leaves a mark, I would single out Lucas Black’s Pee Wee Reese as the sort of performance, utterly devoid of theatrical flourishes, that often goes unremarked. Reese’s famous gesture of solidarity—a white southerner putting his arm around a black teammate’s shoulders before a hostile Cincinnati crowd—has been commemorated so often and in so many different media (children’s picture books, a statue) that it’s come to seem more legendary than real. Yet it happened, and Black’s unlacquered skill makes us believe, or want to believe, that it happened just the way we see it here.

Working for other directors, notably Clint Eastwood (Mystic River, Blood Work), Brian Helgeland has long been a valued scriptwriter, and his L.A. Confidential (directed by Curtis Hanson) is the most perfectly structured script I know. His ability to marshal incidents within the narrative for telling contrast or emphasis is much in evidence here. An obvious example: Soon after Rickey tells his staff, “Money isn’t black-and-white, it’s green,” we cut to a scene in which Robinson, still in a Negro league, finds himself denied the use of a gas station’s bathroom, and so tells the owner, who is just beginning to fill the team bus’s tank with gas, to take the nozzle out. The owner glowers but gives in. We’re thus assured that Rickey has found not only a compliant athlete but a shrewd co-conspirator. Helgeland also sneaks in a few ironies, as when Rickey encourages Robinson’s base stealing by evoking the example of Ty Cobb, the greatest base stealer in the big leagues but also the most virulent racist in the history of baseball.

Helgeland’s direction is almost as good as his writing. Though I wish he had included more baseball action, what’s there is thrilling, especially the over-the-shoulder shots that track the war of nerves between Robinson the base runner and the pitcher. But Helgeland’s direction is often less subtle than his screenplay. A black child representing all youngsters inspired by Robinson is photographed so that his hero worship literally glows. And was it really necessary to out-Natural Robert Redford by filming the pennant-clinching home run in slow motion with spirit-soaring music? A movie as heartfelt as 42 doesn’t need such clichés.

Though I can certainly imagine a Jackie Robinson movie with a grittier approach (did he never take his anger out on his wife after a particularly bad day? do we really need so many inspirational harangues by Rickey?), Helgeland has chosen to create the cinematic equivalent of a heroic ballad, not a psychological portrait. Of course, even a ballad might contain a few more dissonances than 42 allows, but would the song sound as sweet?