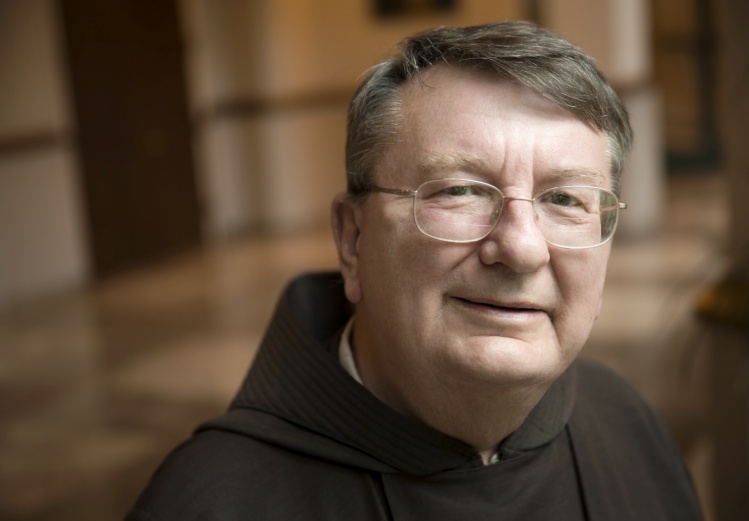 In this 2013 file photo, Capuchin Franciscan Father Thomas Weinandy is pictured at the Washington headquarters of U.S. Conference of Catholic Bishops where he served as chief adviser on doctrinal and canonical affairs. (CNS photo/Nancy Phelan Wiechec)

From the start of Pope Francis’s papacy, a vocal minority of conservative Catholic bishops, priests, and pundits have warned with growing alarm that heresy is threatening the church. The source of such grave scandal? For those who seem consider themselves more Catholic than the pope it’s Francis himself.

A pope who strikes a more welcoming tone toward gay people, urges pastors not to apply the church’s teachings as if “they were stones to throw at people’s lives,” and embraces the reforms of Vatican II has reactionary church traditionalists in a theological tizzy.

The most recent public rebuke of the pope comes from the former director of the doctrine office at the U.S. bishops’ conference in Washington. In a letter to Francis, Fr. Thomas Weinandy, who sits on the Vatican’s International Theological Commission, accuses the pope of fostering “chronic confusion” in his teachings, “demeaning” the importance of doctrine, appointing bishops who “scandalize” the faithful, and causing faithful Catholics to “lose confidence in their Supreme Shepherd.” It’s a doozy of a list, dripping with derision.

The priest’s biggest complaint is with Pope Francis’ document on family life, Amoris laetitia, which has sparked blowback from some conservative Catholics for its reflections on divorced and remarried Catholics. While the pope did not make wholesale changes to church teaching that prohibits divorced and remarried Catholics from receiving Communion until they get an annulment, he encouraged clergy to discern situations on a case-by-case basis. “To teach with such an intentional lack of clarity inevitably risks sinning against the Holy Spirit, the Spirit of truth,” Fr. Weinandy wrote with startling contempt. The letter comes a few months after several dozen theologians, priests and academics accused Pope Francis of spreading seven heretical positions in his teachings on marriage and family life.

Fr. Weinandy and other self-styled guardians of orthodoxy remind me of the righteous Pharisees of Jesus’ time. Fixated on the letter of the law, they missed its deeper spiritual meaning: love, mercy, and justice. Pope Francis isn’t undermining doctrine. In fact, he is rescuing doctrine from dusty theology books, insisting that human beings, in all our complexity and messiness, must be at the center of the church’s vision. His call for accompanying people, rather than reciting lines from the Catechism at them, is a reflection of how Jesus met people where they were and walked with them.

Fr. Weinandy and other self-styled guardians of orthodoxy remind me of the righteous Pharisees of Jesus’ time.
sharetweet

It’s particularly galling that Fr. Weinandy would so condescendingly rebuke the pope given his history of accusing progressive Catholic theologians of disloyalty and dissent. The priest spent years at the U.S. bishops’ conference cracking down on respected academics such as Sister Elizabeth Johnson, a Fordham University professor whose acclaimed book, The Quest for the Living God, is widely read in Catholic universities around the world. Under the papacies of John Paul II and Benedict XVI, Catholic conservatives in positions of influence drew stark lines in the sand. Catholic progressives who explored diverse interpretations of church teachings—or simply called for respectful debate—were branded as dissidents undermining the faith. During those two papacies, Catholic progressives rarely if ever publicly criticized the pope with the venom now demonstrated by former papal loyalists like Fr. Weinandy.

Pope Francis recognizes that debate and disagreement are signs of a healthy church. "Open and fraternal debate makes theological and pastoral thought grow," Pope Francis has said. "That doesn't frighten me. What's more, I look for it." Those are not the words of someone who sees himself as above criticism. The first Jesuit pope also understands that the practice of discernment—the art of being attentive to the Spirit’s promptings—doesn’t fear questions or ambiguity. Chicago’s Cardinal Blase Cupich describes the pope’s reflections on family life and the role of conscience as helping the church move from “an adolescent spirituality into an adult spirituality.”

Part of this adult spirituality means learning how to disagree without descending into petulant sniping. Church leaders, even popes, are not above criticism. But many of those on the Catholic right who deem themselves guardians of truth and orthodoxy are now doing grave damage to a church they claim to protect. Until Francis’s foes can find a civil, more constructive way to make their case, they should resist the urge to make a public spectacle of their anxieties.