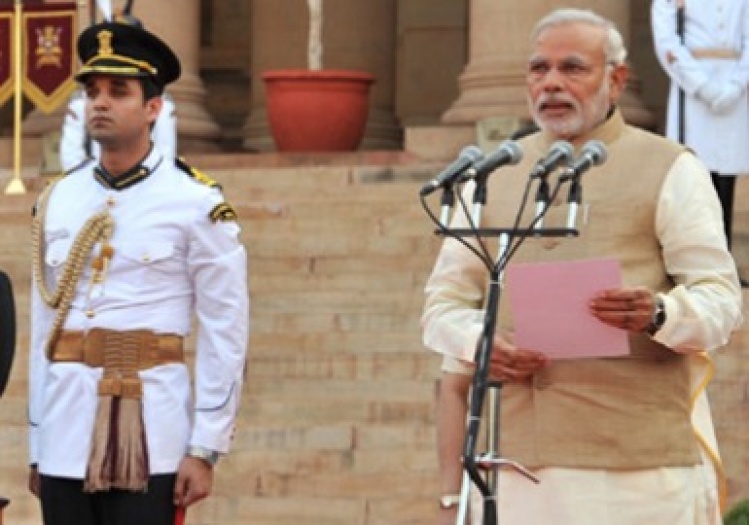 “I dearly love a presidential year,” E. B. White wrote in 1956. “What capers! What laughs and spills! And—at the end of the line—a real, live president. And the people’s choice at that.”

There weren’t many laughs or capers in India’s elections this year. Sixty-six percent of the country’s 814.5 million eligible voters participated, and most voters appeared to take the election very seriously. Nevertheless, it was by and large a depressing campaign season. The ruling Congress Party—dominated by the Gandhi dynasty for generations—had to play defense, as it tried to rationalize its dismal performance over the past five years. The insurgent Bhartiya Janta Party (BJP) was in ferocious attack mode: sarcastic, accusatory, haranguing.

At the end of it all, the BJP’s Narendra Modi, formerly the chief minister of the western state of Gujarat, was the real, live prime minister. The BJP’s win was described in the press as “historic,” “momentous,” and “game-changing.” In fact, 69 percent of eligible voters did not vote at all, voted for one of the country’s many regional parties, or voted for the Congress Party. Only 31 percent of the electorate actually voted for the BJP—not exactly a sweeping mandate. So why does it still feel like one?

Modi campaigned brilliantly and tirelessly. His was the first campaign in India to be professionally designed and managed, and it made excellent use of social media and technology. Modi was able to address a hundred rallies simultaneously, using lifelike holograms. He seemed to be everywhere at the same time: clever, convincing ads on prime-time television; full-page color ads in every newspaper (my husband and I subscribe to eight papers, and it felt like he lived with us). While no official figures have been released, his campaign is thought to have spent at least $670 million. There is no record of where this money came from.

The BJP’s campaign tapped into a deep well of anger at the Congress Party’s corrupt and ineffective governance. In city after city, state after state, Modi hammered home the point: India is mired in corruption, and its economy is stagnant; the country needs good governance. All true.

Modi craftily positioned himself as the only leader with the stature and the credentials to take the country forward, pointing to his ten-year record in Gujarat, a state widely regarded as a model of prosperity. In fact, Gujarat’s growth rate is not much higher than that of many other states in India, and it actually lags behind on social indices like infant mortality, female literacy, and malnutrition. Twelve other states have a lower poverty rate, and Gujarat is ranked twenty-first in education. The state is in the “alarming” category on the India State Hunger Index: 44.7 percent of children in Gujarat under the age of five are underweight, and 23 percent are undernourished. Questioned about the rise in the number of undernourished children in 2006, about halfway into his tenure as chief minister, Modi claimed that Gujarati girls were so thin because they were too beauty-conscious.

During the election campaign, Modi was unapologetic about his strong Hindu beliefs and values. The stages set up for his rallies were sometimes decorated with religious imagery, and he was often to be seen bowing ostentatiously to Hindu deities, performing Hindu rituals, and seeking the blessing of Hindu leaders. Although he speaks about his party as one in which all are welcome, Muslims are clearly beyond the pale. One of his campaign stunts was to wear the headgear of whichever region he was speaking in: a turban in Punjab, a topi in Himachal, a beanie in Assam. But when a Sufi imam offered him the common Muslim skullcap, Modi pointedly refused.

Internationally, Narendra Modi is perhaps best known for his role in the 2002 Gujarat riots, in which more than a thousand Muslim citizens were massacred while police stood by, under orders to let things take their natural course for at least three days. It is generally believed that those orders had to have come from the chief minister’s office. Refugee camps were set up to shelter the nearly two hundred thousand Muslims who lost their homes in the pogrom. Modi referred to these camps contemptuously as “baby-making factories”—an obvious appeal to the strangely popular notion that Muslims are poised to outnumber Hindus, who still make up 85 percent of the population in India. When pressed last year to show some remorse for the lives lost in the riots, Modi said he felt the same kind of sadness one might feel as a passenger in a car that runs over a puppy.

Modi is a lifelong member of the Rashtriya Swayamsevak Sangh (RSS), a Hindu fundamentalist organization with views so extreme it has been banned three times in its nearly hundred-year history in India. One of its long-term goals is Akhand Bharat—a “united India” that would include countries from Afghanistan to Bangladesh. The RSS is the real force behind Modi’s victory, and many believe it will be calling the shots in the new government.

Indian voters responded mainly to Modi’s promises of rapid economic growth and a country where merit and hard work would be rewarded. He is “the people’s choice,” and maybe he will make good on his promises. But choosing to ignore his dark past and even darker ambitions seems like willful blindness.