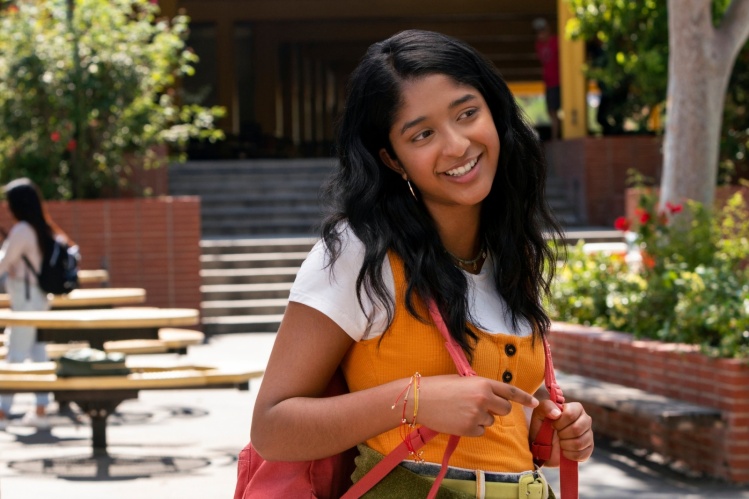 Maitreyi Ramakrishnan in ‘Never Have I Ever’ (Lara Solanki / Netflix)

Back in April 2019, actress and director Mindy Kaling put out an open casting call on Instagram: “Wanted: three South Asian women, varying in age, two with Indian accents, for a new show.” About a year later, her coming-of-age teen dramedy Never Have I Ever debuted on Netflix. It follows the life of Devi Vishwakumar, an outspoken high-school sophomore who, following a traumatic freshman year, has made it her mission to become popular. Ranging from hilarious to painfully cringeworthy, Never Have I Ever is filled with moments you’d expect in any teen sitcom: Devi sneaks out to parties, tries to find a boyfriend, and deals with conflicts between friends. What’s different is its focus on an ethnic reality rarely displayed on screen: the Indian-American experience.

The series opens with Devi praying in front of her home Hindu shrine at the start of sophomore year. She begs the gods to be invited to a party with alcohol and drugs (“not to do them, just to have the opportunity to turn them down”), and to help thin out her arm hair (“I know it’s an Indian thing but they look like the floor of a barber shop!”) Over the course of ten episodes, Devi—alongside her two best friends, a multiracial crew nicknamed the “UN” by Devi’s Jewish nemesis—tries to win over the hottest guy in school while coping with the grief of losing her father. She struggles to connect with her strict dermatologist mother, Nalini, and loses her patience with her annoyingly perfect cousin Kamala, a graduate student visiting from India and preparing for an arranged marriage back home.

In some ways, Devi’s character refreshingly complicates the standard myth of Indian Americans as passive overachievers, the Model Minority. Devi is nerdy and ranked at the top of her class, but she is hardly quiet or submissive. She makes TikToks with her friends, and stresses about both getting into Princeton and getting laid. She has attitude.

The show also alerts us to a key tension faced by many young Indian Americans. On one hand, there’s the more conservative Indian culture of their parents; on the other, the consumerist, liberal America that often makes them uneasy, and isn’t always welcoming. In one scene, Devi feels like she can’t fully connect with her heritage at the community’s celebration of Ganesh Puja, a Hindu festival (the show actually depicts Durga Puja). In another, Devi asks a white college advisor for advice. He feeds her a familiar spiel: elite colleges “don’t want another Indian try-hard with a padded resume.” She needs to find a “story” that makes her different. It’s an exasperating, impossible position, as Devi later understandably exclaims: “Some old loser was telling me that I was too Indian. And some other people think I’m not Indian enough. But honestly, all I want to do is eat a donut.”

Couldn’t the show at least have acknowledged some of the reality it’s grounded in, rather than so completely avoiding it?
sharetweet

For all the show gets right about the difficulties particular to the Indian-American experience, it has also met significant criticism. Much of the backlash focused on how Kaling’s narrative feels unfamiliar to many first-generation Indian Americans. Kaling had anticipated this: “What I realized is that because we don’t have a lot of different shows depicting Hindu teenagers praying, it offends people when it’s not exactly the way that it was for them,” she told the New York Times. I know what she means. Growing up as a first-generation Indian American, I longed to feel “seen” by the shows and movies I consumed. It can be lonely to live in that “third space” between our parents’ cultures and the broader American one. Forging a new identity is unique for each first-generation American (my parents are Goan Catholics, I grew up in Atlanta and San Diego, I went to school in New York), so of course Never Have I Ever could never have pleased everyone.

But there’s a more sinister aspect of the show that goes beyond these easy critiques. It’s the way Never Have I Ever prescribes a certain kind of Indian-American experience as normative.  Indeed, the type of Indian-American culture the show represents is full of reductive tropes like gossip-mongering Indian “aunties”; it also ignores intercaste discrimination in the diaspora, and takes for granted the taboo of interreligious Indian marriage. Nalini is one of the prime culprits: she makes discriminatory jabs against other Indian Americans, at one point remarking that while “Jews know how to save money, Indians just blow it at Home Depot on fountains.” The show hardly condemns the privilege of the affluent Vishwakumars. Set largely in their stylish, immaculate home in the California suburbs, it makes clear that it’s their perspective, not those of other Indians, that counts.

If Never Have I Ever portrays Indian Americans as well-educated and economically successful, it never bothers to ask why they must become so. In many ways, the Indian-American drive to assimilate by becoming (as the stereotype has it) doctors and lawyers points to a deep cultural insecurity: it’s the only way America, dominated by white people, will accept them. Data, though, tell a different story: Indian Americans have some of the widest levels of income inequality in the United States. The majority of them don’t live like the Vishwakumars. Thus in one scene, when Devi complains that her chores make her feel like an “indentured servant,” the joke doesn’t make you laugh. Her sense of entitlement over other Indian Americans makes you angry.

That’s really my biggest complaint about the show: how its superficial anti-racism papers over economic injustice. At the same festival of Ganesh Puja, as Devi says her prayers, her mother instructs her: “Pray you get into Princeton. Don’t waste your prayers on stupid things like world peace.” Nalini’s individualism might be funny, were it not for the grim reality of how caste and class work in Indian culture. Nalini speaks to an upper-middle-class Hindu Indian-American girl, one who never has to think about financial insecurity or caste discrimination. And she assumes a zero-sum worldview: global conflicts, social justice, and moral duties to people who have less than you don’t matter if your trajectory is all about achieving “success.”

Never Have I Ever, then, feels like a missed opportunity. It may be too much to ask of a streaming sitcom, but couldn’t the show at least have acknowledged some of the reality it’s grounded in, rather than so completely avoiding it? When first-generation Americans long for representation on screen, what we’re really asking for is simple, the same as anybody: we want to see and hear the real concerns faced by our communities. We don’t want to be tokenized, reduced, or even congratulated for our ability to assimilate into broader American culture. Too often, the very presence of Black and brown bodies on screen is taken as sufficient. Look, there’s a show just about them, or look, there they are, included in our stories!  Writers and viewers need to do better: we must question the unjust power structures that have perpetuated social injustice in the first place.

What would this kind of entertainment look like? Not the comfortable economic success of Never Have I Ever, for a start. Yes, the show takes an important first step in representing one of many social realities experienced by first-generation Indian Americans. But we should demand more: representation that fearlessly examines the root causes of immigrant anxiety, rather than making light of its surface tensions.