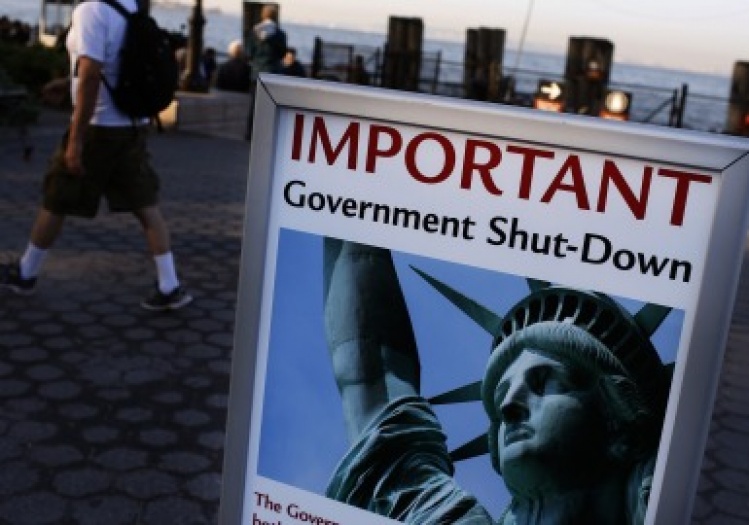 The tea party Republicans should hang a “Mission Accomplished” banner across the House of Representatives. They could flank it with large portraits of Sen. Ted Cruz, the Texas Republican who has in fact, if not in name, replaced John Boehner as speaker of the House. The right-wing extremists got exactly what they wanted. Now, what will the country do about it?

In blundering into a shutdown, Boehner has lost any claim to authority. Helpfully, the speaker-in-name-only underscored this fact himself on the House floor when he mocked the way President Obama talked. Does anyone remember a real speaker going to the well of the House and making fun of a president of the United States? Can anyone now doubt who is responsible for Washington's dysfunction? The Republican right still does not accept the legitimacy of Barack Obama's presidency. This is why much of the government shut down.

The issue here is not that Congress failed to reach a “compromise.” The Democrats already have compromised, lopping about $70 billion off their budget proposal, to the dismay of many liberals. That was meaningless to a tea party crowd that seems to care not a whit about the deficit, despite its fulsome talk. It will be satisfied only if Congress denies health care coverage to about 25 million Americans, which is what “repealing Obamacare” really means.

It needs to be said over and over as long as this stupid and artificial crisis brewed by the tea party continues: Financing the government in a normal way and avoiding a shutdown should not be seen as a “concession.” Making sure the government pays its debt is not a “concession.” It’s what we expect from a well-functioning constitutional system. It’s what we expect from decent stewards of our great experiment. The extremists who have taken over the House do not believe in a normal, constitutional system. They believe only in power.

In the course of things in a constitutional and democratic republic, parties win elections on the issues that matter to them. They pass laws or repeal them by majority vote. The tea party could not muster such a majority to repeal the Affordable Care Act because Democrats held the White House and the Senate in the 2012 elections. Lacking a majority, the extremists chose force. “Do what we want,” they said, “or we will render the country ungovernable.”

That’s what they have done. Everyone says Boehner knew better and did not want this outcome. But he was so fearful for his job that he let it happen.

I would only add: This is also revolt against anyone who accepts majority rule and constitutional constraints.

The burden now is on Republicans who know how deeply radical and, indeed, crazy the tea party has become. These genuine, non-radical conservatives know how irresponsible this shutdown is. They know that playing around with the debt ceiling later this month would be a fundamentally unpatriotic act. “It's a dead end,” Rep. Peter King, R-N.Y., said of the shutdown strategy. King, along with Rep. Charlie Dent, R-Pa., had the courage to stand up against the lunacy by voting against Boehner's last in a series of obstructionist proposals Monday night. Dent told CNN that as many as two hundred Republicans were secretly hoping there would be a vote on the Senate’s continuing resolution so the government could stay open. But if those Republicans exist, they are paralyzed, unwilling to stand up to the far right.

There is only one way for this to end: Republicans fed up with hysteria need to tell the far right, “Enough.” They need to overcome their abject fear of Republicans who are under Cruz-control and their cheerleaders in Rush Limbaugh’s world. They need to exit the Boulevard of Self-Inflicted Wounds.

We now know where the tea party's political experiment leads. If this shutdown does not end the tea party’s reign of intimidation, we will face one unnecessary crisis after another as the extremists keep ripping up the roots of our great constitutional system.

Please email comments to [email protected]lmagazine.org and join the conversation on our Facebook page.