Corbyn is no Sanders, Johnson is no Trump
By Matthew Sitman
Donald Trump
Foreign Affairs
Economy 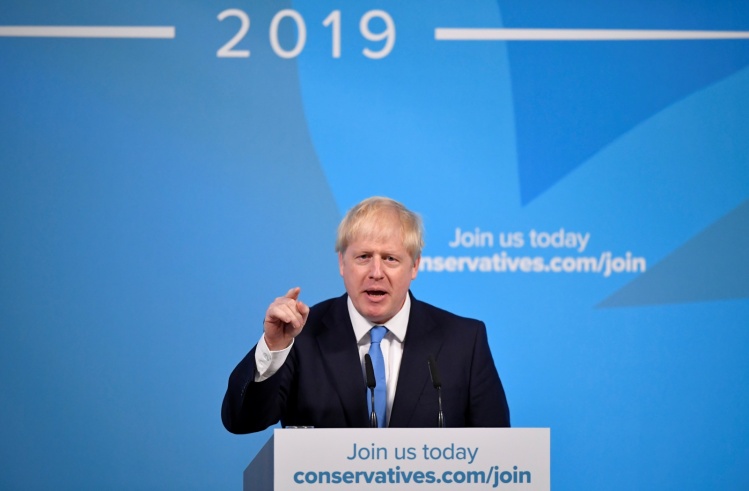 In the weeks leading up to the Conservative Party’s triumph in the British elections earlier this month, there were just enough glimmers of hope to let Labour partisans nurture what, deep down, they probably knew were unrealistic dreams of an upset—anecdotes about surging voter registration, talk of armies of canvassers, a bit of movement in the polls. In the end, that only made the final results more stunning. Boris Johnson will lead a commanding majority in Parliament with a mandate, as his campaign slogan went, to “get Brexit done.”

The vote tallies had barely been announced when pundits began churning out dire warnings about what this meant for Democrats in the United States: See what happens when you move too far left? In the Atlantic, Yascha Mounk gravely suggested that if Democrats “position themselves outside of America’s cultural mainstream, they may suffer the same dismal fate as Jeremy Corbyn’s Labour Party.” In New York magazine, Andrew Sullivan admonished them to “ignore the woke.” The New York Times rushed out an article about the “ominous signs” centrist politicians like Joe Biden and Rahm Emanuel saw in Labour’s defeat. Roger Cohen, also in the New York Times, published a column titled “Boris Johnson and the Coming Trump Victory in 2020.” His colleague Bret Stephens seemed to agree, concluding that to oppose Trump with “progressive primal screams is to ensure his re-election.”

Not much of this was serious analysis. It’s true that Donald Trump could win again in November, especially in the absence of an economic downturn. But the direct comparisons between U.S. politics and what happened in Great Britain strain credulity. Most of all, Jeremy Corbyn was a deeply unpopular candidate, quite apart from his politics. His approval rating going into the election was forty points underwater. While some of this surely was due to an onslaught of negative press, including charges of anti-Semitism, it’s also true that Corbyn could seem evasive in his answers about Brexit, allowing his position to be tagged as “dither and delay”—during his final debate with Johnson, he refused to say whether he would campaign for or against the deal he promised he would negotiate with Brussels and put to a second referendum. Bernie Sanders, often compared to Corbyn, is viewed quite differently. As Eric Levitz pointed out, he’s “more than 15 times as popular as his British comrade.”

There’s little evidence that Labour’s leftwing agenda should be blamed for their loss. One exit poll found that only 12 percent of respondents cited the party’s economic policies as the reason they didn’t vote for Labour, while 43 percent said it was because of the party’s leadership. Polling on the Labour platform was summarized this way by the Independent: “The public are absolutely not scared of government intervention and quite like Labour's socialist platform. These policies individually range from quite popular to ridiculously popular.” Proposals to raise taxes on the rich and nationalize railways and water companies, for example, garnered broad support. Whatever else this means, it certainly doesn’t prove that Democrats should tack to the center instead of embracing a wealth tax, Medicare for All, or the Green New Deal.

When Trump runs for re-election, he’ll no longer be a blank screen onto which voters can project their hopes, but a candidate who has to defend a record of astonishing cruelty, incompetence, and pathetic obedience to the demands of corporations and plutocrats.
sharetweet

There is at least one lesson Democrats should take away from the British elections, however: rightwing populism remains a potent political force. Johnson’s clear position on Brexit appealed to the same kinds of voters who swung to Trump in 2016—working-class whites from places hit hard by deindustrialization, eager to find a scapegoat for their plight anywhere but among the Tories who inflicted austerity on the country over much of the past decade. Yet even this comparison breaks down. No issue in U.S. politics, not even immigration or “the Wall,” will do for Republicans what Brexit did for the Tories. As Ell Smith recently noted in the Guardian, “of the 54 seats that the Conservatives gained from Labour, 52 of them were in areas that voted leave in 2016.”

Despite their superficial similarities, Trump is no Boris, and the Tory Party is not the GOP. Both Trump and Boris are oafish and untrustworthy, but one is a dolt while the other is too clever for his own (and his country's) good—half Bertie Wooster, half Machiavelli. Johnson has pledged to protect the very popular NHS (true socialized medicine), and produced plausible plans to build new hospitals and hire more nurses, while Trump, not nearly so capable, has tried to kill the relatively modest provisions of Obamacare. At every turn, Trump has showed that his populist rhetoric, especially on economic matters, was just that—rhetoric. When he runs for re-election, he’ll no longer be a blank screen onto which voters can project their hopes, but a candidate who has to defend a record of astonishing cruelty, incompetence, and pathetic obedience to the demands of corporations and plutocrats.

But most of all, the working class in the United States is rapidly becoming more diverse—in a decade or two, half of it will be people of color. Much of the commentary on the British elections has simply erased this fact, treating the aging white population of a small island as representative of our own electorate. Lacking a controversy as galvanizing as Brexit, and faced with the prospect of the United States becoming a majority-minority country within many of our lifetimes, the GOP increasingly relies on undemocratic institutions such as the Electoral College, the Senate, and the courts, as well as assaults on voting rights and foreign interference in elections, to cling to power. If Trump wins again, it will not look like the wave that delivered Johnson his impressive majority. It’s more likely that he’ll win while receiving millions fewer votes than his Democratic opponent—a prospect that reveals a different task for those who want to see him defeated.

Whatever else it might include, that task is to activate U.S. workers of all races who, unlike in Great Britain, lack even the rudiments of a decent health-care system and social safety net, and to turn out voters whom Republicans are desperately trying to keep away from the polling stations. That will not be easy. But it will happen only if Democrats offer a real alternative to Trump—not simply following his lead while promising to be a touch less racist, or to keep immigrant children in more comfortable cages, or to cozy up to billionaires with less enthusiasm. Of course, this strategy means that the election would hinge on whether or not the tens of millions of well-off, well-educated white voters who voted for Trump—not the semi-mythological “white working class”—choose differently this time. Perhaps that’s the hard reality that our elite pundits, who pose as tribunes of the aggrieved masses, refuse to consider.