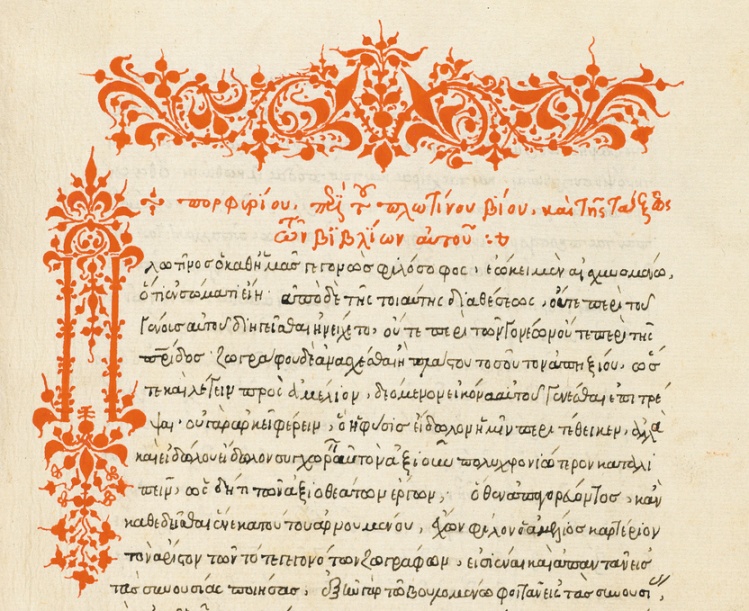 What little we know about the life of Plotinus (ca. 204–270 CE) comes from the short memoir with which his disciple and literary executor Porphyry (ca. 234–305 CE) prefaced The Enneads—the complete edition of Plotinus’s writings that Porphyry collected and arranged. Because Plotinus was reluctant to speak of his early life, and because Porphyry came to know him when he was already fairly advanced in years, the picture we have is of a man already fully formed in personality and settled in his convictions. According to Porphyry, Plotinus attached small importance to his own biography. Just as he objected to having his likeness drawn or sculpted, because he was ashamed at finding himself caught in the shadowy meshes of a material body, so he also objected to dwelling on the trivial details of his individual existence as a mortal man.

We know that he came originally from Deltaic Lycopolis, in a thoroughly Hellenized Egypt, but not whether he was of Coptic or Greek descent, or what class he came from. Apart from one mildly embarrassing episode with a wet nurse when he was eight, his story begins for us around 232 CE, when at the age of twenty-seven he decided to move to Alexandria to study philosophy. There, after an initial period of searching about among the various schools, he attached himself to Ammonius Saccas, the “Socrates of Neoplatonism.” After eleven years in the city, he conceived a desire to study with the “gymnosophists” and philosophers of India and Persia, and so joined the Persian expedition of Emperor Gordian III. But when that military venture ended in disaster, Plotinus was forced to make a perilous retreat to Antioch, apparently more or less on his own. He moved to Rome, where he spent the rest of his life teaching. When his final illness set in, he retired to Campania to die. His last words were supposedly something like, “Try to elevate the god within us to the divine in the universe.” Then, as his soul departed his body, a snake passed under his bed and out through a hole in the wall.

Apart from this bare outline, Porphyry provides only a few brief, if illuminating, anecdotes. For instance, Plotinus once explained his decision to remain aloof from certain festal liturgies by mysteriously remarking that the divine beings should come to him, not he to them. On another occasion, when the orator Diophanes had publicly argued that a philosopher’s disciple, for the sake of his own advancement, was obliged to submit to his master’s sexual importunities, Plotinus was too agitated to deliver a refutation himself, but had to depute one of his followers for the task. And there are a few more colorful tales, of the sort modern readers might foolishly be prone to doubt. An aspiring philosopher from Alexandria named Olympius, for example, became consumed by envy and attempted to attack Plotinus with magic. But the spells doubled back upon the sorcerer, and Olympius was forced to acknowledge the invincible strength of Plotinus’s soul. Porphyry also relates that, on at least four occasions during the years of their friendship, Plotinus achieved mystical union with the highest divine reality. Perhaps the most delightful tale of all concerns a priest of Isis who, at the temple of the goddess in Rome, invoked an apparition of Plotinus’s tutelary divinity, only to discover that Plotinus was attended by no mere celestial daemon (as most good souls are) but rather by an actual god. In the end, though, these are only so many tantalizing glimpses. Would that we knew a little more. Then again, perhaps Plotinus was right—perhaps too great a concentration on the ephemeral episodes of his life would only distract us from his ideas.

Those ideas, after all, were profoundly influential. Viewed in long retrospect—looking back from the vantage of late modern philosophy, through the golden epochs of the great Christian and Islamic medieval schools, to the world of late antique Hellenistic, Jewish, and Christian thought—we find no pagan thinker more consequential for the development of later traditional “Western” metaphysics and epistemology. Plato and Aristotle, of course, laid the foundations; but it was principally through the vehicle of what we now call “Neoplatonism” that the ancient systems were conveyed to the post-pagan world, and it was principally through Plotinus that Neoplatonism first acquired the full grandeur and scope of a recognizable and internally consistent tradition in its own right. His thought constituted a crucial crystallization and creative revision of those spiritual and intellectual currents of late antiquity that would prove most durable and influential in subsequent centuries.

Though Plotinus’s importance has never been entirely forgotten by scholars, and though he enjoyed a period of particularly reverent recovery during the Renaissance, he has rarely received the degree of close attention from modern philosophers that he merits. Moreover, for roughly a century it has been his undeserved fate to serve as a rhetorical foil—caricatured, misrepresented, slandered—for Christian theologians (chiefly Protestant) who have wanted to differentiate between what they fancifully imagine to be the God of the Bible and what they no less fancifully imagine to be the God of the philosophers. This is a pity. There was no more brilliant and dynamically original thinker in the last few centuries of pagan intellectual culture, or the first few centuries of the Christian era.

This new critical edition—under the supervision of the always impressive Lloyd Gerson—remedies most of the shortcomings of its predecessors.
sharetweet

So it is rather odd that until now there has been no scholarly edition of The Enneads in English. There have been two previous complete translations, but neither was a fully critical edition with the sort of basic scholarly apparatus needed by serious students of Plotinus’s thought. Stephen McKenna’s translation (completed in 1930, revised by B. S. Page in 1956) has long been prized for its literary felicity and honest attempt at accuracy. But it was not made from the best textual exemplars, it suffers from certain idiosyncrasies of translation, and in places it betrays the translator’s sometimes questionable understanding of the Plotinian system. The seven-volume Loeb edition (1966–1988), prepared by the philosophically astute classicist A. H. Armstrong, is an admirable achievement, but its critical apparatus does not do enough to situate the texts or their ideas in the intellectual world of Plotinus’s time.

On the whole, this new critical edition—under the supervision of the always impressive Lloyd Gerson—remedies most of the shortcomings of its predecessors. For one thing, it uses the best available version of the original texts. For another, the translations have obviously been undertaken with great care, and with diligent editorial oversight, in order not only to harmonize their terminology and style but also to render Plotinus’s distinctive speculative vocabulary into a plausible set of English equivalents. Plotinus’s language, it should be noted, is anything but smooth and perspicuous. The treatises were apparently written hastily, and were never properly revised—in large part because of Plotinus’s poor eyesight, atrocious handwriting, and general carelessness with regard to syntax. Plotinus’s Greek encompasses a number of oddities of expression (and even of spelling), and he was not always consistent in terminology. No translator, therefore, can hope to be absolutely certain that he or she has captured the exact connotation of every word or the exact meaning of every sentence. But this edition of The Enneads comes as close to establishing an authoritative Plotinian idiom in English as we could reasonably hope. If it lacks the grace of the McKenna version, it is at least as accurate as the Armstrong at just about every point, and more so in many instances. It also provides a comprehensive glossary, explaining precisely which terms or phrases in English correspond to which in Greek. For any reader with enough Greek to have strong opinions on such things, the glossary makes it possible to recognize where his or her choices might have deviated from those of the translators. In short, this edition is now, without question, the definitive version of these texts in English. It is not likely to be challenged, let alone surpassed, at any point in the foreseeable future.

This volume might also provide an occasion for a renewed appreciation among Anglophone readers of Plotinus’s importance—not only for the history of Western thought, but for contemporary philosophy. At least, as I was rereading the treatises that make up The Enneads in this new edition, I could not help noticing how severely logical a thinker Plotinus was. Of course, if one thinks of philosophical reasoning as a process of reducing synthetic propositions to analytic simples (the pathology of the currently dominant Anglophone tradition) then one might fail to notice how ingeniously each of Plotinus’s guiding claims follows from its essential premises. Many contemporary scholars are familiar with the basic scheme of Plotinus’s thought—the descending ontological hierarchy of the One, Nous, and Psyche, for instance. Some may even be aware of his distinctive treatment of divine simplicity and infinity, or his insistence on the goodness of Being and his definition of evil as pure privation, and so on. But they are likely to think of all these things as a kind of extravagant speculative fantasia, dreamed up by an ingenious artist of the abstract. In point of fact, Plotinus appreciated as perhaps no earlier Western philosopher had ever done that there is a primordial alliance between mind and world, and was able to derive a coherent philosophical picture from this truth.

Plotinus gave exquisitely refined expression to the ancient intuition that the material order is not the basis of the mental, but rather the reverse. This is not only an eminently rational intuition; it is perhaps the only truly rational picture of reality as a whole. Mind does not emerge from mindless matter, as modern philosophical fashion would have it. The suggestion that is does is both a logical impossibility and a phenomenological absurdity. Plotinus and his contemporaries understood that all the things that most essentially characterize the act of rational consciousness—its irreducible unity of apprehension, its teleological structure, the logical syntax of reasoning, and on and on—are intrinsically incompatible with, and could not logically emerge from, a material reality devoid of mind. At the same time, they could not fail to notice that there is a constant correlation between that act of rational consciousness and the intelligibility of being, a correlation that is all but unimaginable if the structure and ground of all reality were not already rational. Happily, in Plotinus’s time no one had yet ventured the essentially magical theory of perception as representation. Plotinus was absolutely correct, therefore, to attempt to understand the structure of the whole of reality by looking inward to the structure of the mind; and he was just as correct to suppose that the reciprocity between the mind and objective reality must indicate a reality simpler and more capacious than either: a primordial intelligence, Nous, and an original unity, the One, generating, sustaining, and encompassing all things. And no thinker of late antiquity pursued these matters with greater persistence, rigor, and originality than he did. For Anglophone readers inclined to try to follow the course of his reasoning to its end, this new edition provides the ideal resource.

David Bentley Hart is a frequent contributor to Commonweal. His most recent book is Roland in Moonlight (Angelico Press).