By Grant Gallicho
Synod on the Family
Pope Francis
Bishops 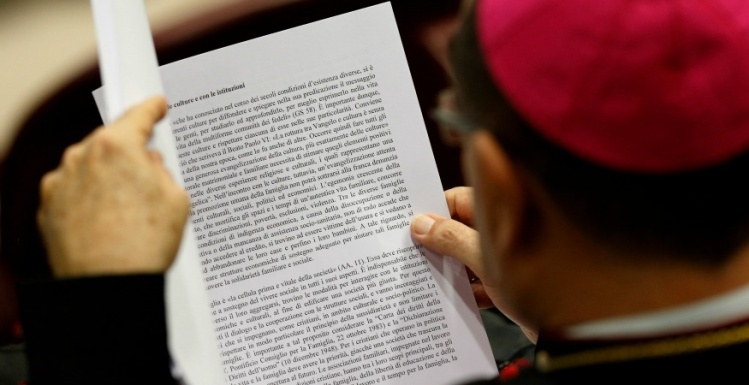 ROME—In the beginning was the letter. And the letter was published. By Sandro Magister, longtime Vaticanista, sometime critic of this papacy, and current insinuator of the idea that one of those responsible for leaking the text may be the most famous resident of Casa Santa Marta.

Last week, Magister published a letter sent by several cardinals to Pope Francis, criticizing the synod process for favoring those who want to change church practice on a range of contested issues. The letter, which was sent to the pope before the synod began, received a direct response when Francis delivered an unscheduled address on the second day of the proceedings. He reminded the synod fathers that he had personally approved of the synod process, and urged them not to fall victim to a “hermeneutic of conspiracy.” (That memorable line was amusingly interpreted by the camptastically named “Xavier Rynne II”—who has been aiming his firehose of verbiage at the goings-on here since the synod began. And by George if he doesn’t think the pope’s phrase wasn’t really referring to those who have been hoping for some change out of this meeting. XR2 assures that the leak “certainly did not involve the Holy Father.” So that’s a relief.)

Later it was reported that Magister got several of the signatories wrong. Some who acknowledged putting their names on a similar letter said that the version Magister published wasn’t the one they signed. This occasioned not the slightest hint of regret from Magister. Instead, he published a follow-up piece noting this correction but basically saying he was right all along. He still hasn’t explained how he got the letter, what the version he published actually was, or how he managed to botch the list of signatories.

And today Magister comes not to bury the letter, but to praise it. The thing got results, he claims: “And it got them above all after its publication, which allowed a larger number of synod fathers to become acquainted with it and recognize themselves in it, and therefore to exercise firmer pressure on those who govern the synod, in order to obtain answers more satisfying than the ones given until then.” After all, now the synod fathers will vote on the final summary document paragraph by paragraph. Of course that was how it was going to go all along. That’s what happened at the end of last year’s synod—and Francis decided to publish all the document’s paragraphs, even the ones on divorce and homosexuality, which failed to receive the two-thirds majority required for approval. And that will likely happen this time too.

So what results actually flowed from Magister’s decision to publish his version of the letter? Well, for one thing, it provided another opportunity to ding the pope, suggesting that those closest to him, perhaps even Francis himself, had something to do with leaking the letter: “In the uproar unleashed by the publication of the letter of the thirteen cardinals to the pope,” Magister writes, “the Vatican authorities who manage communication—from Santa Marta [where Francis lives] more than from the Apostolic Palace—have in fact fomented attacks not so much against the one responsible for the publication, but much more against the synod fathers who signed the letter.” Earlier this week, Magister went out of his way to say that he wasn’t the first reporter to mention the concerns of the thirteen cardinals. Rather, the first to “squawk” about it was “the Vaticanista who is friendliest with and closest of all to Pope Francis, his frequent guest at Santa Marta and his interviewer many times over: Andrea Tornielli.” But Tornielli didn’t publish the letter. Magister did. Did he think the cardinals who signed it weren’t sharing their views with their fellow synod fathers? Or that the pope’s public response did not bring the matter to a close (which, incidentally, is the view of several of the signatories)? Apparently not. So he tried to bend the arc of the synod in the direction he preferred. But his grip slipped, the story turned in a way that apparently surprised him, and now he wants to blame someone else for the mess he helped make.

Update (Wednesday morning): Today Magister published yet another article about the article he published last week (that's four so far, and there are miles to go before this synod sleeps). In his latest piece, Magister asserts that the public "aggression" against the cardinals who signed the letter enjoyed the "de facto support of the Vatican managers of synod information." What is the source for so bold a claim? None. Magister just says so.

Later in the post, Magister offers another journalistic gem. Writing about the panic that followed the release of the 2014 synod's mid-term report (which dared to ask questions—questions—about how the church thinks about people in "irregular situations," including gay couples, cohabitating couples, and the divorced and civilly remarried), Magister claims that "Forte, Wuerl, and Fernández [all part of that drafting committee] were the most active and unscrupulous in pushing their 'agenda,' as Napier calls it today."

Magister is referring to yesterday's Vatican press briefing, during which Cardinal Napier offered a statement of strong support for the synod process he criticized just two weeks ago: “The new process of the synod was very helpful, because it gave us so much more time to reflect in small groups,” the cardinal said. Coming to Napier's defense, Magister continues his parade of epithets: "This year as well the commission for drafting the final relatio was entirely appointed by Francis, who again put on it the three aforementioned cardinals, one of whom, Wuerl, has also been in recent days the most offensive in publicly attacking the thirteen signers of the letter to the pope, including Napier."

Magister closes with a particularly impressive bit of special pleading: During the press conference, he writes, Napier made "it clear that precisely having reawakened the synod’s attention to the risks exposed in the letter has played in favor of a more correct execution of the work." In other words, by publishing the letter, Magister helped save the synod from "unscrupulous" people like Cardinal Wuerl. But Magister—who has never indicated how he received the letter or what it even is (a draft? a copy of an e-mail?)—is wrong about that too. The letter changed nothing about the process of this synod. Indeed, Pope Francis stiff-armed the letter-writers the day after he received notice of their concerns: I approved this process, he said; don't give in to "the hermeneutic of conspiracy." Yet that is precisely the hermeneutic that Magister is feeding as he continues his campaign for savior of the synod.