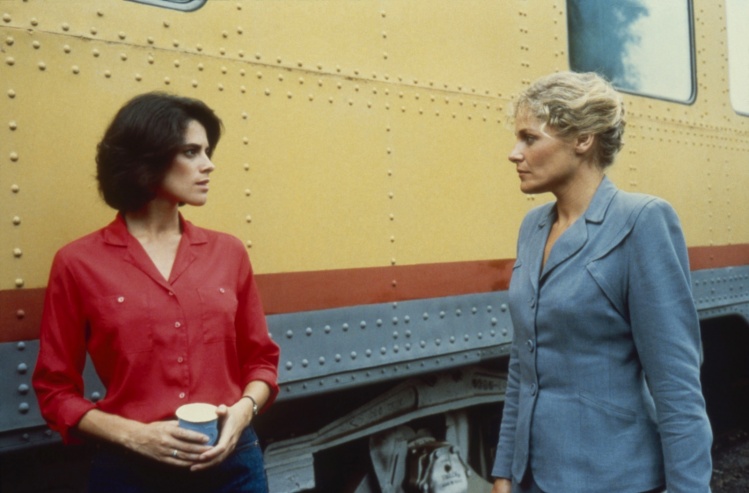 Donna Deitch always intended Desert Hearts to be not only a lesbian classic, but one of the great romances. In the commentary to the director’s 1985 adaptation of Jane Rule’s novel Desert of the Heart, Deitch explained: “It was my express purpose to make a film fashioned on an old-fashioned love story.... This was meant to be a universal love story.”

And so Desert Hearts (which will get a Criterion Collection edition this month) plays it by the book. A stranger comes to town, and there’s a meet-cute. The buttoned-down Professor Vivian Bell (Helen Shaver) has arrived in Reno for a quickie divorce. She’s met at the highly traditional train station by Frances (Audra Lindley), the owner of the guesthouse where she’s staying. As they drive together through the desert, a car speeds by them—driving backward at fifty miles per hour, blasting rock ’n’ roll. The daredevil in the driver’s seat is Frances’s unofficial stepdaughter, Cay Rivvers (Patricia Charbonneau). She instantly gets our attention, and Vivian’s.

Set in 1959, Desert Hearts is a product of late ’70s and ’80s nostalgia for the 1950s—part of the same film culture that gave us Grease, Diner, Back to the Future, and Peggy Sue Got Married. One of the film’s most fascinating features is the use of rock and country music to build a world in which there are only two human conditions: romantic fulfillment, and romantic loneliness. A full twenty percent of the independent film’s budget was spent on music rights: Patsy Cline’s “Crazy,” Jim Reeves’s “He’ll Have to Go.”

But the central song for the movie’s mythology is Elvis Presley’s “Blue Moon.” We first encounter this aching ballad when Frances is recalling her ten-year affair with a married man, the great love of her life: “Had a love of my own,” she reminisces—and then adds, realizing what the words remind her of, “That’s a beautiful song.” “Blue Moon” floats in the background the first time Vivian comes to Cay’s place. Until they met one another, Vivian and Cay thought that they would be forever left gazing at the lighted windows of other people’s lives. Without a dream in my heart. Without a love of my own.

I first saw Desert Hearts in 1992 or early 1993, on a date with my first girlfriend, about five years before I became a Christian. I was probably the Cay in that relationship, young and pushy and not as brash as I might have seemed. The movie’s feverish romanticism swept my teenage heart away. It’s a brilliantly made film, from the sublime shots of the hot sky and the desert (Deitch hired the film’s editor for his work on Terence Malick’s Badlands) to the perfectly stylized 1950s Western clothes and furniture. It would be a long time before I realized how thoroughly all of us live in that Desert Hearts world.

There are three love stories in Desert Hearts. There’s Vivian and Cay, of course. There’s also Cay’s brassy coworker Silver and her fiancé Joe. And, only in memory, Frances and her married lover Glen. All three of these stories are told with an almost aggressive sweetness. Vivian and Cay walk along a lake at sunset and kiss in the rain. Silver and Joe shine with their happiness, and their relief at having found one another. And Frances offers one of the movie’s two definitions of love: “He reached in and put a string of lights around my heart.”

This is the world of The Lobster, but with sugar in place of the acid.
sharetweet

That’s a beautiful image: the light coming into a dark place, allowing you to see and know yourself by the light of the love you have for someone else. But the film’s other definition of love is much blunter. “One of these days,” Cay tells her stepmother, “I’m gonna meet somebody who counts.” Cay’s half-brother doesn’t count, Cay’s best friend and staunch supporter Silver doesn’t count. Only a romantic partner can really count. This is the world of The Lobster, but with sugar in place of the acid.

Each of these love stories is shot through with popular music. We know Cay and Vivian are going to get together when Vivian lets the radio on Cay’s car play rock instead of switching it back to Prokofiev. When Silver finds out about Cay and Vivian, she giggles, “Well rock and roll!” Silver writes her own country song for Joe, and performs it at their rehearsal dinner. “Joe—Joe—I’m holding you off the ground, the whole time I’m singing this song,” she says, her deep rich voice pulsing with emotion. And then sings:

I need to find someone that’s mine—
Been so lonely.
I’ve tried a few, wouldn’t do—
So lonely.

The only scene in Desert Hearts entirely without music is the sex scene. For those three or four minutes—which could be characterized equally well as the fulfillment of Cay and Vivian’s emotional journey and as soft-core porn—there is no need for the social world because the private world has at last achieved its purpose.

Part of the movie’s power is that this is recognizably our world: the world in which gay people try to imagine our futures. When was the last time you heard a song on the radio about the joy and relief of finding a true friend? Unless you seek out Christian media, you probably don’t run across artistic representations of the enthralling, life-shaping love of God. Devotion, intimacy, commitment, love itself—today these are all mainly euphemisms for sex and marriage.

When Frances finds out about Vivian and Cay’s affair, she kicks Vivian out of her guesthouse. Lindley’s nuanced performance, and the script’s willingness to let her have mixed motives she herself doesn’t fully understand, make Frances more than a stock villain standing in the way of our heroes’ happiness. She and Cay negotiate a halting reconciliation (at a wedding, no less!) in a believable portrayal of difficult forgiveness. But of course Frances’s hypocrisy, condemning a lesbian couple when her own great love was adulterous, fuels Cay’s indignation. And it fuels the audience’s, too, because this is also recognizable to us: heterosexual sins excused and homosexual sins punished by people who claim to speak for the God Who is Love. When Christians attempt to speak about gay people (rather than to them), these declarations often single out heresies regarding gay and transgender life while discreetly drawing a veil over the ways straight Christians have accommodated their faith to the sexual revolution. The recent Evangelical “Nashville Statement” is only one example of this phenomenon. That’s the Frances problem.

Beyond the hypocrisy in which some kinds of sins go unnamed, there's a sadder absence in which some kinds of love go unnamed. No other models of human love are named or even hinted at in the Nashville Statement—and it is neither an innovator nor an outlier in this respect. This is not the world of Scripture, in which covenant friendships like that of Jonathan and David mirror God’s love for us; in which the extended-family love of Ruth and Naomi is woven into salvation history as Ruth becomes one of the only women mentioned in Jesus’ genealogy; in which the virgin Jesus embodies love itself. So far from viewing marriage as the only or highest form of love, Jesus calls his disciples to become his friends. He shares an especial intimacy with “the beloved disciple” John; dying on the Cross, Jesus entrusts his own mother to John’s care. By contrast, most Christians today, whether we think of ourselves as traditional or progressive, live under the blue moon in the world of Desert Hearts. If the only available model for real love—the only chance to find “someone who counts”—is marriage, you can’t be surprised that people with same-sex desires want same-sex marriages. When there’s only one song in the world, everybody will want to cover it.

The desert, in Christian thought, is above all the setting for the encounter with God. The desert is among other things an image of celibacy: celibacy as a state that may seem to be isolated, but which is filled with God’s love, as the desert is filled with hidden life. He makes the desert bloom, making childless celibates like Fr. Henri Nouwen bear fruit in their life-sustaining love for others. In the desert God slakes our thirst with Himself.

Human beings have a terrible longing to love and be loved. This is why the lovers’ faces in Desert Hearts so often show not only joy but relief. These are astonished people who weren’t sure love would ever come for them, and who find it even better than they’d been told. They were almost dying of thirst when they found the oasis of sexual love. Christians believe there are other oases in the desert, with waters even sweeter. But the signposts to these places have all been knocked down. 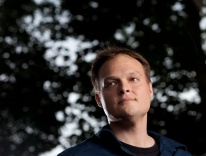 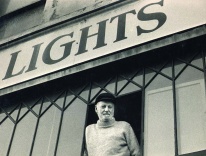 Last of the Beats