A Loss of Nerve 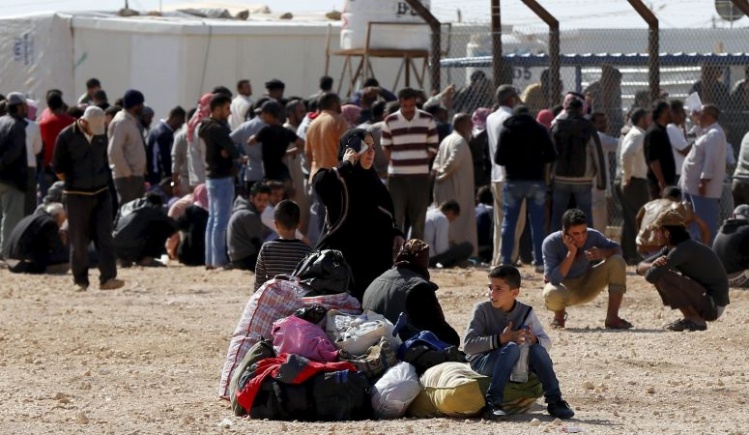 The discovery of a Syrian passport near the body of one of the suicide bombers at the Stade de France in Paris was the “tell” that many of those opposed to admitting refugees had sought. In a speech titled “Attack on Europe,” the Hungarian Prime Minister, Viktor Orbán, whose government has already overseen the construction of a razor-wire fence to secure its border, claimed that terrorists were “mingling in the mass of people leaving their homes in the hope of a better life.” Those who opened their nations’ doors to refugees “did not do everything for the defence of European people.”

Orbán is not alone in suggesting that European countries cannot accept more refugees without undermining their national security. Several member states are resisting the EU resettlement plan announced in September, which would use a quota system to resettle a total of 120,000 refugees throughout Europe. While media reports of the refugee crisis have tended to contrast the hostility of certain Eastern European countries with the apparent openness of their Western and Northern neighbors, there are signs that the Paris attacks have caused a more widespread loss of nerve. A YouGov poll conducted shortly after the attacks found that 73 percent of the British public believed that there should be no increase in the number of Syrian refugees admitted into the United Kingdom—up from 51 percent in September. In the same poll, 24 percent said that the United Kingdom should admit no refugees at all. In Germany, where a million migrants are expected to arrive this year, Angela Merkel has seen her once-enviable popularity ratings plummet. Footage of Germans clapping as refugees arrived at Munich’s main train station became a source of national pride in September, embodying her slogan “Wir shaffen das” (“We can do this”). Today there are calls within Merkel’s own party to replace “Willkommenskultur”—the “culture of welcome”—with a “culture of reason.” Reports of North Africans and Arabs robbing and assaulting women in Cologne on New Year’s Eve have only deepened the suspicion and anxiety.

Amid these signs of panic, it is notable that France has remained steadfast in its commitment to resettlement. “The people of Syria and Iraq have fled because they are martyred by the same people who attack us today,” French President François Hollande told French mayors, before confirming that his government remained committed to welcoming thirty thousand refugees over the next two years. It is notable that Serbia, one of the poorest nations in Europe, and not yet a member of the EU, has also kept its borders open. The flight from violence in the Balkans in the 1990s is still recent history, cited by volunteers greeting the weary caravan of refugees now passing through their country.

Intergovernmental organizations have given short shrift to those who cite the Paris attacks as justification for refusing to cooperate with the EU resettlement plan. The UN High Commissioner for Refugees (UNHCR), António Guterres, has said that it is “absolute nonsense” to blame refugees for terrorism. As the “first victims” of the terror in Syria, Iraq, and Afghanistan, they should be met not with fences but with reception centers and legal routes of entry. Europeans have also been warned that in turning on refugees they will play into ISIS’s strategy—one predicated on sowing fear, suspicion, and division and thereby precipitating a conflict between the Muslim world and the West.

The fact is that, like the London bombings of 2005, the Paris attacks were the work of home-grown extremists, young men who had grown up in France and Belgium. It is estimated that more than 750 people have travelled from the UK to Syria and Iraq to volunteer with Islamic militants, and that around half of them have returned. The danger, then, is already here, within our own borders.

No one is arguing that the mass migration to Europe does not bring with it security risks. The discovery that the alleged architect of the attacks, Abdelhamid Abaaoud, had apparently been able to travel freely between Syria and Europe has led to recriminations about the ease with which Europe’s lack of internal border controls can be exploited. A German police chief has reported more than sixty attempts by extremist Islamic groups to recruit from refugee shelters, according to a Reuters report. Even among refugees, there is a sense of resignation that there may be some extremists among them. “There are of course ticking bombs coming in with the refugees,” Nizar Basal, a Syrian refugee living in Germany, told the news agency. “But the question is, what will happen to us? What will people think about us? They will think we are the enemy.”

Even before the Paris attacks, Europeans were frightened by refugees. There had had been rumors over the summer that among the huddled masses crossing the continent were some jihadis. The image of a tiny toddler in blue shorts washed up on a Turkish beach softened hearts, but scenes of chaos in countries struggling to deal with the unprecedented number of refugees still caused alarm. Since the beginning of the crisis in Syria, the UNHCR has been issuing strong warnings that countries like Lebanon—where Syrian refugees now make up a quarter of the population—were buckling under the burden, but few in the West paid attention. It was images of bodies squashed aboard dinghies in the Mediterranean, of refugees shivering around campfires in the Balkans and lying desperate on train tracks in Hungary that finally forced European governments to recognize the magnitude of the crisis. “Unfortunately, only when the poor enter the halls of the rich do the rich notice that the poor exist,” observed Guterres.

THE CONTRAST BETWEEN the response in Europe—reactive, ill-tempered, and chaotic—and that of the countries bordering Syria ought to be a cause of shame. People in countries like Lebanon and Jordan have been nothing short of heroic in recent years, and they deserve both more credit and more support. Their generosity has come at huge cost. In September, Lebanon’s Prime Minister told the UN that the refugee crisis was costing his country a third of its GDP. Lebanon is not a signatory to the 1951 refugee convention but, despite memories of a thirty-year occupation by Syria and the fact that it already hosts four hundred thousand Palestinian refugees, it opened its borders in 2011. Lebanese communities, including those in the poorest parts of the country, responded quickly, offering the refugees shelter and access to services and support. This was at considerable political risk, given the fragile demographic balance between Christians, Sunnis, Shia, and Druze in Lebanon, and the possibility of upsetting a hard-won political settlement between these groups.

Jordan, the fourth-driest country on earth, is hosting six hundred thousand Syrian refugees. Before my visit to the country this year, I read its plan for dealing with the crisis: two hundred pages of detailed projections, followed by a request to the international community for $2,991,736,900—the amount it needs to support the new arrivals and to cope with their impact on the communities hosting them. In contrast with the panic and recriminations that have characterized the response in Europe, this document, with its color-coded charts and neat tables, radiated confidence and optimism.

Jordan’s plan is part of a wider regional response to the Syrian crisis, described by a UN report as a “paradigm shift.” The Syria Regional Response Plan, involving Syria’s neighbors (Iraq, Jordan, Lebanon, and Turkey) as well as Egypt, combines proposals for meeting the immediate needs of refugees with long-term plans to support the communities hosting them. It is an ambitious piece of work. By the end of this year, it aims to have almost a million children enrolled in formal education, with 1,121 educational facilities constructed, renovated, or rehabilitated. The plan would also give 217,000 refugees access to wage-employment opportunities, building on efforts that are already working, such as an organic olive oil facility set up in Turkey to strengthen the local economy in an area heavily affected by the crisis.

The thoughtfulness of this comprehensive response makes the failure to fund it adequately all the more tragic and short-sighted. As of December 31, the program had only 58 percent of the funding it needs. The UN has warned that, unless funding increases, 1.7 million people in the region will face winter without heating fuel, insulation, or extra blankets. Programs for a hundred thousand out-of-school children and teenagers in Turkey will have to be canceled or postponed. In Jordan, refugees have already lost access to free health care because of insufficient funding, while in Lebanon 70 percent of refugees are living in extreme poverty. In the Bekaa Valley they are burning plastic bags to keep warm, and already there are reports of people dying during winter storms.

Perhaps most worrying is the fact that 2 million Syrian children are not going to school. This number includes both refugees and children still living at home whose lives have been interrupted by the civil war. The No Lost Generation campaign, launched two years ago by a coalition of NGOs, is starting to ring hollow, and the UN reports an increase in what it calls “negative survival strategies,” including child labor, begging, and “survival sex.” This is not an inevitable outcome, and it is not classrooms or teachers that are missing. It is estimated that, with proper funding, half of these children could be in school within two years.

As it stands, Syrians are living in misery and, increasingly, despair. Images of skeletal bodies dragging themselves through the streets of Madaya—a besieged Syrian town described as an “open air prison” by Doctors Without Borders—are a reminder of the horrors refugees are fleeing. Desperation motivates the risky exodus to Europe. When refugees are met in Europe with hostility, they become, as the UN has put it, secondary victims of ISIS’s terrorism. The attack in Paris took place just days after the death of René Girard, one of France’s most celebrated intellectuals. Girard famously argued that human beings need to identify a scapegoat—“chosen only because it is vulnerable and close at hand”—in order to dispel anger and violence, and that in doing so they sow the seeds of future conflict. We now have an chance to catch ourselves in the act of such scapegoating, and to stop before it’s too late. There is still time for Europe and the United States to give refugees the welcome they deserve and, no less importantly, to provide material support to the millions who will never get beyond the Middle East. Rather than fearing them as potential jihadis, we need to understand them as the principal victims of the sectarian violence now wracking Syria and Iraq—and to treat them as such.

Madeleine Davies is features editor at the Church Times in London.

Down & Out at Amazon