The trials of a religion teacher
By Paul Baumann
Education
U.S. Catholicism
Ethics 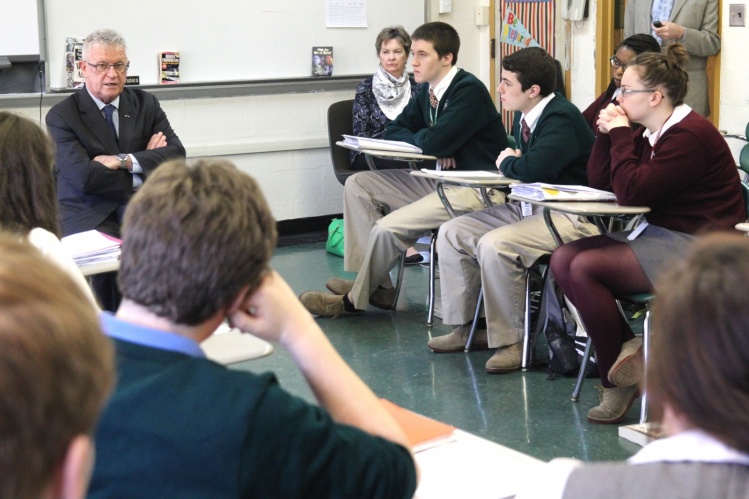 As my old Commonweal colleagues will attest (they helped clear out my office), I’m something of a pack rat. If anything has any conceivable future use, I save it. Admittedly, I save things in a way that makes it hard to quickly put my finger on them again. In my defense, my filing “system” makes up in comprehensiveness for what it lacks in efficiency. In other words, my papers are a god-awful mess.

We recently moved from a suburb of New York City to a small coastal village at the eastern end of Long Island Sound. We had lived in the village for twenty years before moving closer to the city, and the possibility of returning had long been on our mind. In an impetuous moment just as Omicron was blossoming, we took the plunge. In a span of about forty-five days, we sold our house, bought the new one, and moved. That proved to be more exhausting and disorienting than anticipated. But we are back in a cherished place and, much to our delight and surprise, we are surrounded by old—in both senses of the word—neighbors and friends.

I’m now in the forlorn business of unpacking boxes of papers and books. One of the “treasures” that appeared in this exhumation process was the textbook I used the one year I taught “religion” at a large diocesan high school near our current home. The dogeared textbook brought back mixed memories.

I have often described that year as “the longest in my life.” Several challenges contributed to that assessment. I taught five classes of “ethics” to juniors and one of “comparative religion” to seniors. The class of seniors was relatively small, but the ethics classes were large—usually thirty or more students. Like most first-time teachers, I found classroom management to be a struggle at first. The seniors were smug and disdainful, the juniors mostly indifferent. They all shared an exasperation over having to do homework for something as impractical as religion class. In the class of seniors, students inserted scraps of paper into the electrical outlet used to plug in the filmstrip projector, causing a brief fire. When I graded the first set of tests for the ethics classes, I discovered that more than half of the students had cheated.

This was almost as amusing as it was discouraging. Not having attended parochial school, I was under the misimpression that “religion,” a required course, was considered a serious subject. That did not turn out to be the case. My freshly minted master’s degree in religion was more a hindrance than a help in understanding this novel terrain. On the other hand, the school’s football and basketball teams were champions. Much religious ardor could be found on the playing fields and in the stands.

I think the attitude of the students can be attributed to several factors. First, most had gone to Catholic schools and had taken religion instruction all their lives. It had become repetitive and boring. Second, peer pressure was intense, and few of the popular kids took religion class seriously. You were thought to be a “goodie-goodie” if you did. Third, this was the early 1980s, a time of deep confusion regarding Vatican II’s reforms and what they meant for Catholic practice and morality. One of the principal reference tools for the religion classes was a complete video library of the Phil Donahue Show, where the show’s host, a Notre Dame grad, pushed a so-called “progressive” agenda when it came to Catholic issues, especially on sexual morality. In other words, the curriculum for religion classes was a muddle. As a result, and much to my surprise, the students had only the flimsiest grasp of certain basic Catholic teachings.

The curriculum for religion classes was a muddle. As a result, the students had only the flimsiest grasp of certain basic Catholic teachings.
sharetweet

After those first trying days, I got my classes under control. I ended up liking the vast majority of my students, and the rest of the year went reasonably well, with the exception of one particularly disturbing incident. The ethics textbook was a hodgepodge of commentary on theories of moral decision-making, both in secular and Catholic contexts. Catholicism’s reputation for moralistic rigidity was clearly being soft-pedaled. Adolescent impatience with adult judgmentalism was assuaged with statements like the following: “Probably most people, when they make lousy decisions—ones that end up unduly hurting themselves or others, do so not because they had bad intentions to begin with, but because they are simply mistaken.” So much for Original Sin.

Many of the case studies used to introduce a version of Catholic casuistic thinking had to do with predictable teenage dilemmas, and the text was profusely illustrated with photos of handsome adolescents engaging in earnest conversations. Sexual behavior, of course, was a particular emphasis. But other case studies tackled cheating, stealing, drugs, and alcohol—all the usual subjects bedeviling high schoolers. The text also discussed broader issues such as the death penalty, mass murder, “the right to die,” abortion, racial prejudice, and even cannibalism—always a favorite for teenagers with a high tolerance for the ghoulish. These issues were presented with brief narrative episodes followed by “Discussion Questions”—for example, “What do you honestly think of the Catholic Christian approach to morality as explained above?” The lesson on cannibalism concerned a famous British court case regarding two sailors, adrift at sea after the sinking of their ship, who were prosecuted for killing and eating a younger and weaker survivor. In good utilitarian fashion, the sailors reasoned that the younger man would have died anyway and that killing him was the best hope for any of them to survive. When I quizzed one class on what the survivors’ reasoning had been, a wag suggested that because the victim was the youngest, he would have been the tenderest and therefore the tastiest. That got a good laugh, even from me.

Classroom discussions rarely got heated, but one that did was about a 1979 Newsweek article on the question of whether homosexual teachers should be fired. I explained the Church’s teaching on the illicit nature of homosexual acts, as well as its teaching on the dignity of homosexual people—a combination of doctrines difficult for many people to understand or accept. One male student took strident exception to the idea that people who experience same-sex attraction were not themselves inherently morally corrupt. He was belligerent in class and turned in a written assignment filled with slurs against homosexuals and vaguely threatening toward me. I alerted the school administration, and a meeting was arranged with his parents. It did not go well. The administration did little to back me up. The young man subsequently drove to my house and vandalized my car. I had to get a lawyer to send a letter to his parents warning of legal action.

So my year teaching Catholic morality ended on a sour and ironic note. I was especially perplexed by how the school handled the incident. Here was a real-time case study in moral decision-making and accountability, one that should have involved a recognition on the student’s part that, yes, we all make mistakes, but actions have consequences. Making amends for immoral acts requires remorse and penance, not glowering adolescent resentment and adult indifference. But that turned out to be the sort of morality more easily found in a textbook than in life.