LGBT Catholics Are a Reality 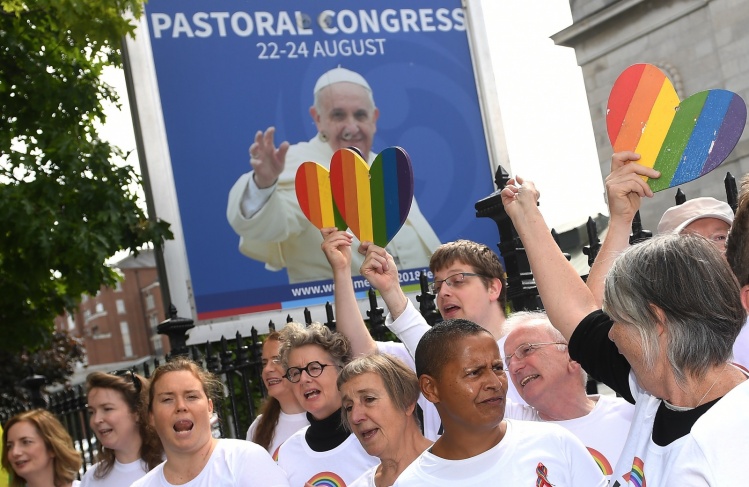 An LGBT choir sings outside the Pastoral Congress at the World Meeting of Families in Dublin (CNS photo/Clodagh Kilcoyne, Reuters)

A pair of developments in the fall of 2018 helped illustrate once more the need for an understanding of gender and sexual identity adequate to what we know about human sexuality. The first was the Trump administration’s proposed modification of Title IX to define “sex” as either “male or female, unchangeable, and determined by the genitals that a person is born with,” leaving all “disputed cases” to be resolved through genetic testing. This binary classification of sexual identity would impact nearly 1.4 million Americans who do not identify with the gender indicated on their birth certificates, prompting transgender and gender-queer persons (and those who stand with them) to characterize the proposal as transphobic and anti-LGBTQ+.

The second was the decision by bishops at the 2018 Synod on Young People not to include terms like “gay” or “LGBT” in the synod’s final document when discussing theologies relevant to persons who identify somewhere along the LGBTQ+ spectrum, or simply as “queer”—even though the former term was used in the gathering’s preparatory documents. (Some notes on these terms: When used to refer to identity, the word “queer” distinguishes gender identities and sexual orientations that exist at some variance, on the one hand, with a binary understanding of cisgender embodiment [man/woman], and, on the other, a binary understanding of sexual desire and sexual practice. Both “queer” and “LGBTQ” are shorthand, but the latter explicitly names specific identities. Adding “+” to LGBTQ signals that there are forms of gender and sexual variance beyond those named in the acronym. One such example is “gender-queer,” which distinguishes any gender identity that lies at some variance with the cisgender gender binary, covering persons for whom the word “transgender” does not accurately represent their self-understanding. As others have pointed out, the simple use of the term “LGBT”—even without the “Q” or the “+”—represents great progress in terms of recognition in ecclesial documents.)

Of course, when it comes to the Catholic Church’s conversation about queer persons, there’s nothing new about a conflict over something so small as how to refer to people who clearly already have shown a preference for how they would like to be named. But it has made it more clear than ever that the current theology of sex and gender has run its course.

Just consider how this theology typically, and predictably, is debated today. On the one side, we have comments like these from Archbishop Charles Chaput of Philadelphia, writing against the use of the term “LGBT” in church documents:

There is no such thing as an “LGBTQ Catholic,” or a “transgender Catholic,” or a “heterosexual Catholic,” as if our sexual appetites defined who we are; as if these designations described discrete communities of differing but equal integrity within the real ecclesial community, the body of Jesus Christ.

On the other, we have the words of Fr. James Martin, S.J., writing in favor of the use of “LGBT” in church documents:

Referring to L.G.B.T. people with the name that most now use for themselves is part of the “respect” called for by the Catechism…. Refusing to call a group by the name that most in the group prefer borders on disrespect. L.G.B.T. youth, who are often harassed, bullied and “called names” are especially attentive to disrespectful language.

Two things are worth pointing out here. The first is that both of these statements reflect a recurring dynamic in the Catholic understanding of sexuality: the driving of a wedge between the “doctrinal” approach to queer persons, and the “pastoral” approach to queer persons. Chaput himself emphasizes the doctrinal point driven home by Cardinal Ratzinger in 1986: homosexuality is not an identity. Rather, it is an adverse psychological condition. And on this logic—the same logic, by the way, that rightly grounds the conclusion that we should, for example, prefer the term “person living with depression” to “depressed person”—we should not refer to persons in ways that may imply that they are essentially defined by something that they are, in fact, managing.

Our theology of sex and gender does not reflect the actual world that God has created for us. It reflects, instead, an understanding from the world of another time.
sharetweet

But this is a nonstarter for queer persons—something Martin realizes. Even if the teaching states that homosexuality constitutes a sort of “objective disorder” or that transgender identity somehow dishonors God as creator, such an approach will do nothing to increase the number of queer persons in our congregations. The term “LGBTQ+ Catholic,” at the very least, validates the experience that queer persons have of their own identities—it is not something they are “managing.” The use of the term assures queer persons that, regardless of how the theological conversation ends around sexuality, it nevertheless begins with each person on equal footing. In other words—and as Francis in his papacy has relentlessly pointed out through comments validating the experience of queer persons—there is no other approach to queer issues other than to maintain a humble respect for how queer persons experience their own embodiment. There is, then, no other approach besides a pastoral approach. Such is the way of mercy—indeed, such is the way of the Lord Jesus—that Francis is trying to model for us.

The second point to make is that this entire conversation about nomenclature distracts us from the conversation that we should be having, which is about how to bring our theology about gender and sexual identity into alignment with reality—that is, into alignment with what we know about human embodiment and sexual experience. Speaking as a theological ethicist within the Roman Catholic Church, I tell my students, “Good ethics begins with lived human experience informed by the virtues of justice and equal regard, and by respect for better understandings of human embodiment that we’ve gained over time. Let’s begin here.”

This means that we cannot talk about what the world should be like until we come to an understanding of what the world is like. The same goes for understanding gender and sexuality. And for an understanding of what gender and sexuality is like, we need to turn to scientists (though, of course, not exclusively to them) who study the phenomena that we are interested in. For homosexuality, the results have been in for decades: same-sex attraction, far from constituting a psychological disorder, is actually a normal trait observed in human sexual experience. And as Anne Fausto-Sterling, a professor of biology and gender studies at Brown University, pointed out in a recent column in the New York Times, the complexity of gender identity is something scientists have been learning about since the 1950s. The existence of transgender, genderqueer, and intersex persons challenges the notion that gender comes to us in a prepackaged binary. Intersex persons challenge this binary at the level of biological constitution; trans and genderqueer persons, at the level of one’s psychological constitution. What do we know in 2018? Speaking specifically about intersex persons, Fausto-Sterling writes:

An XX baby can be born with a penis, an XY person may have a vagina, and so on. These kinds of inconsistencies throw a monkey wrench into any plan to assign sex as male or female, categorically and in perpetuity, just by looking at a newborn’s private parts.

The truth is that our theology of sex and gender does not reflect the actual world that God has created for us. It reflects, instead, an understanding from the world of another time. But more importantly, such a theology does not reflect a truly Catholic method of studying sexuality, which has typically come through the framework of natural law. The natural law, as an ethical framework, represents an approach to human flourishing that begins with an honest assessment of what it’s like to be humans running about in the world. This requires, in the case of understanding human sexuality, a broad consultation with scientific and philosophical approaches to human sexuality. Only after this point can we begin to ask what light the Gospel shines on what it would mean for human beings to flourish as sexual and gendered creatures.

But this is precisely what Archbishop Chaput seems not to want us to do. In the same speech in which he discouraged the use of “LGBT” within church documents, he also said the following:

Who we are as creatures, what it means to be human, why we should imagine we have any special dignity at all—these are the chronic questions behind all our anxieties and conflicts. And the answer to all of them will not be found in ideologies or the social sciences, but only in the person of Jesus Christ, redeemer of man.

To oppose “the person of Jesus Christ, redeemer” to “the social sciences” is to employ a dichotomy that the Catholic tradition cannot sustain, especially if we believe—as John Paul II celebrated in his encyclical letter Fides et ratio—that all truth has a common origin in God. It is one thing to disagree with scientific findings, but it is another thing to find them simply inadmissible. Chaput’s comments here do not evince the nuanced approach of the former.

Just as the Trump administration threatens to undo decades of work in creating a more just world for queer persons, deferring to an understanding of sex and gender that doesn’t comport with the world in which we actually live, so we Catholics are exiling ourselves from the world with our current theological framework for making sense of sex and gender. We need to understand the trajectory of human sexual flourishing as one that maintains a critical openness to how researchers have been able to shed light on sex and gender identity over time. We should expect this from ourselves; we should expect it equally from our church’s leaders.

Craig A. Ford, Jr., is a Postdoctoral Teaching Fellow at Fordham University. He writes at the intersection of queer theory, critical race theory, and the Catholic moral tradition.