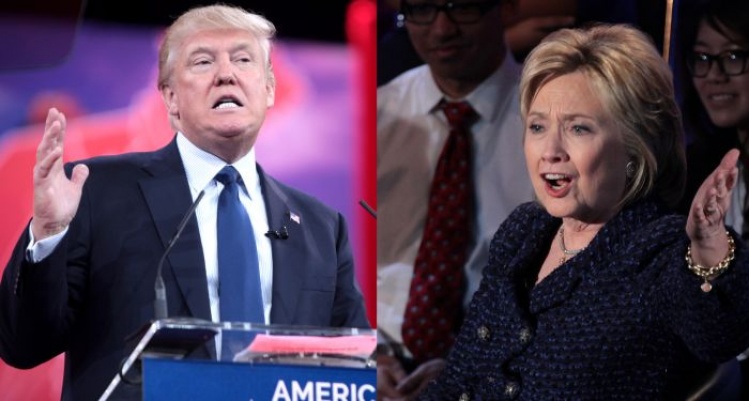 The most bizarre presidential campaign in perhaps the entire history of the United States will culminate Tuesday.

It’s well known that the Democratic nominee, Hillary Clinton, and her Republican opponent, Donald Trump, are both extremely unpopular among many members of their respective political parties.

The U.S. bishops, by and large, have depicted them as equally unacceptable to Catholic voters because the positions of each of the candidates are inimical to various aspects of the church’s social or moral teachings.

But the so-called culture warriors in the American episcopate, like Archbishop Charles Chaput of Philadelphia, have been none too subtle in saying that a candidate who supports legalized abortion (despite the fact it has been the law of the land since 1973) is always worse than one who opposes it. And by doing so, they effectively have signaled support for Trump.

The prospect of a Trump presidency has sent shivers up the spines of most officials in the Vatican. The Americans who work in the Roman Curia, however, are among a small minority of the Rome-based church bureaucrats who would actually like Trump to win.

That does not mean the Vatican will be delighted if Hillary Clinton is the next president. The former first lady and secretary of state has always had a frosty relationship with the Vatican, dating back to the mid-1990s.

In 1994, she led the U.S. delegation to the UN population summit in Cairo and clashed bitterly with the Holy See delegation over efforts to guarantee “reproductive rights” for all women throughout the world. Clinton lost that fight but Vatican officials continued to view her as an adversary a year later in Beijing when she addressed the UN summit on women and repeated her earlier appeal, though in a toned-down manner.

Interestingly, Clinton never once visited the Vatican or met with Pope Benedict XVI during her four years as secretary of state (2009-2013). She was the first person in that office to snub the Holy See in some forty years, dating back to 1969-1973, when William Rogers held the post in the first Nixon administration.

But it seems Vatican officials would be more than willing kiss and make up with Hillary if she were to win the election.

“One of our real concerns is who she will appoint as U.S. ambassador to the Holy See,” one high-ranking official told me.

“You are really that confident that she’s going to get elected?” I asked.

The official replied with a very serious look.

“She has to,” he said. “The other option would be a disaster for the entire world.”

Pope Francis has once again deeply disappointed Catholics who believe their church should ordain women to the ministerial priesthood.

During his flight back from a truly groundbreaking visit to Sweden (all he did was became the first pope in history to commemorate the Protestant Reformation at a joint prayer service with Lutheran bishops, including one who was a woman), a Swedish reporter asked Francis if the Catholic Church would ever have women priests.

“Sweden, which hosted this important ecumenical encounter, has a woman as the head of its church. What do you think about that?” the female journalist began.

“Is it realistic to envision women priests also in the Catholic Church in the coming decades? And if not, why? Are Catholic priests afraid of competition?” she concluded.

The pope, as he often does when responding to delicate questions regarding the role and place of women in the Catholic Church, started with a bit of his now-characteristic humor (which, let’s admit it, not everyone finds very funny).

“Reading a bit of the history of the area where we just were, I saw that there was a queen who was widowed three times, and I said, ‘This woman’s strong!’ And they told me: ‘Swedish women are very strong, very capable, and this is why some Swedish men look for a woman of another nationality.’” Francis joked.

And he added with a self-exonerating giggle, “I don’t know if that’s true!”

Here is the most literal way of rendering that: “On the ordination of women in the Catholic Church, the last clear word was given by St. John Paul II, and this remains. This remains.”

(The late polish pope, in fact, issued the 1994 apostolic letter Ordinatio Sacerdotalis and concluded with these lapidary words: “I declare that the Church has no authority whatsoever to confer priestly ordination on women and that this judgment is to be definitively held by all the Church’s faithful.”)

But if we translate what Pope Francis said in a less literal way, the gist of his answer was that John Paul II issued the church’s “latest clear teaching” on women’s ordination and this “continues” to be its most recent teaching.

When the Swedish journalist interrupted the pope and asked if that meant forever, he responded, “If we read carefully the declaration of St. John Paul II, it goes in this direction [in questa linea]. Yes.”

Francis was just quoting John Paul—namely, that the late pope intended this to be a definitive teaching that could never be changed. In essence, the current pope once again sidestepped the issue.

And let’s face it, there are never going to be women priests in the Catholic Church until there are first women deacons. At least Pope Francis has begun a conversation about this other, related issue.

That may not be enough for those who believe the refusal to ordain women to the priesthood is an injustice, in both human and divine terms. But a pope who has caused such opposition and rebellion among some more traditional Catholics (mainly in the hierarchy and clergy) merely for allowing women to be participants in the Holy Thursday feet-washing ceremony has to choose his battles wisely. Some of them he must wage quietly or serendipitously.

The fact is that in a little over three years, Francis has effectively begun prying open the proverbial windows of the church, windows his two most recent predecessors had slammed shut in an effort to halt the movement of ongoing reform that continued to gain steam in the early years after the Second Vatican Council.

Whether Francis can succeed in re-implementing the movement of ecclesia semper reformanda and actually effect major reforms in the church’s life and structures (as he envisions in his 2013 document Evangelii Gaudium) will depend on how long his pontificate lasts.

If you are hoping he succeeds, then pray for his ongoing good health.

And also pray that Benedict XVI, the former pope, lives for many more years to come.

Because Francis has told close aides that while he, too, would consider stepping down at some point, he believes it would not be a good idea to have two retired popes living at the same time.

At least three major quakes dating from last August have caused the devastation of buildings and the loss of hundreds of lives in central Italy.

The most powerful—but, thankfully, not the most deadly—came early last Sunday morning. And those of us living in Rome even felt strong tremors for twenty or thirty seconds.

The town of Norcia, the legendary birthplace of St. Benedict in the hills of Umbria, bore the brunt of this most recent quake. All its churches, including the basilica named for the famed father of monasticism, were destroyed or at least damaged beyond recognition.

The tremors even caused cracks in the structure of the Basilica of St. Paul’s Outside the Walls in Rome, where the church was closed briefly for further inspection.

Seismologists say the ground is likely to continue moving in the weeks and months ahead. Some fear the worst is yet to come.

And there is talk in the Vatican that Pope Francis is also preparing an earthquake of sorts, an ecclesiastical earthquake that will again shake up personnel and office structures. They say his reconfiguration last week of the group of cardinal and bishops who serve as members of the Congregation for Divine Worship was just a slight tremor compared to what’s likely to come.

The changes the pope is planning could amount to a tectonic shift at the Vatican (and maybe throughout the universal Church) or maybe they will only constitute a few shifts here and there.

But we’re probably not likely to see them until after he creates new cardinals at the November 19 consistory or holds the next meeting of his exclusive council of nine cardinal advisors (C9) from December 12 to 14.

Then again, it’s not possible to predict the exact time an earthquake will hit.