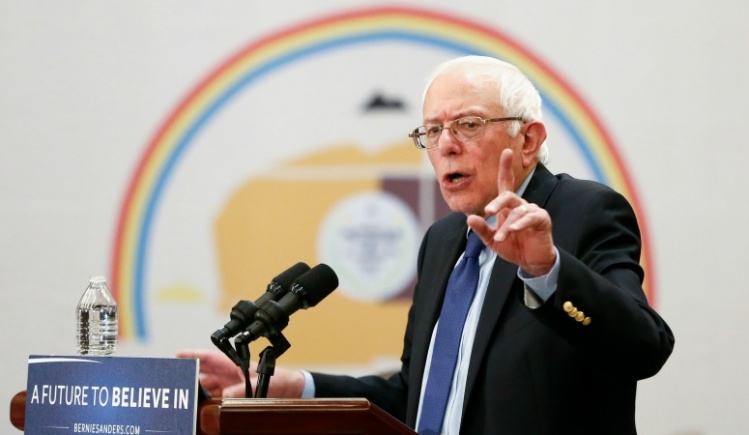 At any given moment, it seems at least someone at the Vatican is up to a bit of mischief.

But the rash of articles about Bernie Sanders’s participation later this week at a conference at the Pontifical Academy of Social Sciences suggests that several people in and around Pope World, and not just one individual, are trying to make trouble.

Among them are some of the journalists who have regurgitated erroneous information from other sources or who have simply indulged in sensationalism. But to be fair, the hacks are not the only ones to blame.

Let’s begin by looking at the facts and what we know to be certain.

First of all, Senator Sanders is scheduled to give a talk on Friday afternoon at the Pontifical Academy’s headquarters inside the Vatican Gardens. He’s one of about forty-five people who will be participating in a two-day conference called Centesimus Annus: 25 Years Later.

The booklet for this conference to revisit John Paul II’s 1991 social encyclical makes that absolutely clear. On page seven he’s slotted at 4pm to speak about “the urgency of a moral economy.” And on page nine his photo is among two dozen other high-profile attendees.

But some of the first people to report on the story made the exaggerated claim that Pope Francis had invited Sanders to the event. That was as stretch of journalistic imagination and it was false.

And it may have been what sparked Margaret Archer, the Academy’s president since 2014, to pour fuel on the fire by then accusing Sanders of having invited himself.

Enter Bishop Marcelo Sanchez Sorrondo, chancellor of the Pontifical Academy since 1994, the year John Paul established it. The bishop came forward and admitted that he was the one who invited the U.S. presidential hopeful. And he said he had done so with the consent of Archer.

At this point in the story, there are already a couple of major problems that have surfaced. The most serious is the obvious breakdown of communications (at least) between the chancellor and president of the Academy. The way that each has contributed to that mix-up spilling out into the open suggests that the problem between them goes even deeper.

Whether Sanders or someone from his campaign team approached the chancellor and fished around for an invitation to this week’s conference is unclear.

But the fact that Bishop Sanchez, for whatever reason, invited a major candidate for the US presidency to a meeting inside the Vatican during an election years beggars all belief. Vatican officials simply don’t do this sort of thing in order to avoid any semblance of endorsing candidates for elections in foreign countries.

So the real question is, what sort of mischief is the chancellor (or whomever at the Vatican or in the Academy suggested that he invite the senator) up to? What would he/they hope to achieve by doing so? And, most importantly, who are trying to embarrass?

Because you’d have to be to be pretty naïve to think this would not cause embarrassment.

Cardinal Raymond Burke has written a most curious article in which he goes to great lengths to show that Catholics are under no obligation to accept anything in Pope Francis’s new exhortation on the family that has not already been codified as doctrine by the Church’s magisterium.

The sixty seven year-old American cardinal basically says Francis’s effort to develop the current teaching and the way it’s applied is nothing more than the pope’s personal opinion.

Papa Francesco must be laughing his head off or scratching it in disbelief. Or, just maybe, he’s doing both at the same time—laughing with one of his heads, while expressing befuddlement with the other.

Didn’t you know? The pope has two bodies. And we can thank Cardinal Burke for pointing that out in his article:

You don’t say, Ray... “The first body is his mortal body; the second body is the divine institution of the office of St. Peter and his successors,” he does say.

From which “traditional understanding” did the cardinal cherry-pick this piece of medieval theological speculation? Perhaps he’s been checking out library books at Ecône again...

We can thank Benedict XVI for making Burke a cardinal. That was in 2010, two years after the ex-pope called the illustrious doctor of the law to Rome to oversee the Church’s “supreme court.”

But Pope Francis discerned that the talents of the cardinal (also known as the high priest with the long red train) could be better utilized elsewhere. So in the autumn of 2014 he relieved the Wisconsin native from the burden of overseeing the Supreme Tribunal of the Apostolic Signatura and made him cardinal-protector of the Knights of Malta.

Perhaps, the pope should now give the cardinal an extended vacation. Or at least hire a nurse to make sure he’s taking his meds.

Pope Francis’s apostolic exhortation, Amoris Laetitia, has a lot of other doctrinal hardliners and doctors of the law like Cardinal Burke in a bad mood these days.

Those already in the episcopate are either biting their tongues or downplaying the significant shift in direction the pope is obviously trying to bring about with the document. Many have talked about the methodology Francis used to arrive at this point of the discussion on marriage and the family.

It is called “synodality” in the broad sense—the entire church, pastors and people, walking and dialoguing together to discern the way forward on certain issues and challenges. The exhortation marks just one more step on the way. And you can bet that if the pope has anything to say about it, this document will not be the final word on all the topics it looks at.

But what about the Synod of Bishops? Is Francis really serious about further reforming it so that it becomes an even more dynamic and regular organ of his ministry in governing the universal church?

There have been many signs that he is moving towards this. But if he is really intent on beefing up the Synod he’s got to be better at watching his tongue.

At the very start of Amoris Laetitia (in paragraph four, to be precise) he speaks of “the two recent Synods on the family.” Later on, in paragraph thirty-nine, he again refers to “the last two Synods.”

Unfortunately, this is incorrect.

There is only one Synod. It is a permanent institution with its secretariat (or coordinating office) located in Rome. The use of the word “synods” actually refers to the “assemblies,” those fixed moments when the pope calls the Synod of Bishops into session.

The bishops who are voting members at those assemblies are representatives (through election by their confreres or appointment by the pope) of the entire, worldwide episcopate.

The Bishop of Rome is the Synod’s president. Up to now he has called this body into session at regular, but infrequent intervals (every couple of years), in order to get the other bishops’ advice on particular issues and problems facing the church. He is free to accept or reject any proposals they give him.

When a particular assembly is over, the Synod does not end. Rather, it is simply no longer in session until the pope convokes it again. Pope Francis is not the only one who erroneously talks about the various “synods” that are held in Rome. Most people at the Vatican—even in the Synod’s secretariat—do so as well.

This is not being nitpicky. Using the wrong words will only perpetuate muddled thinking. And there’s enough of that already.