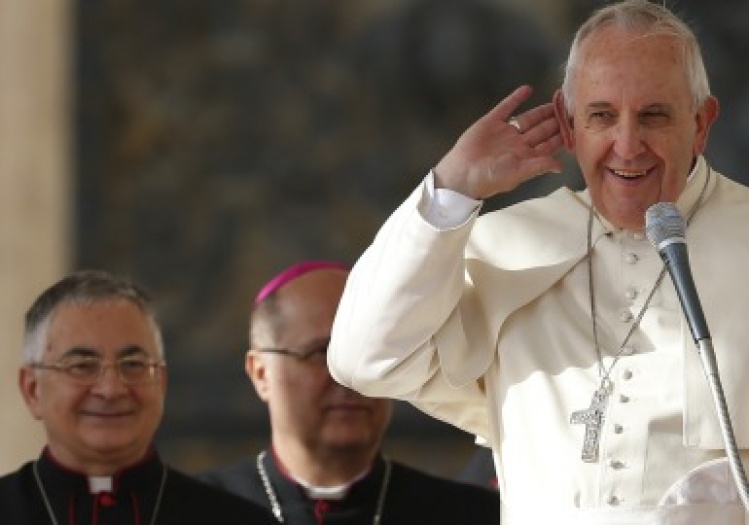 Pope Francis made a key appointment last week when he named Archbishop Paul Gallagher the Holy See’s equivalent of “foreign minister.” The sixty-year-old Liverpool priest is the first English-speaking native to hold this important position, officially called Secretary for Relations with States. He has an attentive pastoral sensitivity and excellent dialogue skills, most recently on display in Australia where served less than two years as papal nuncio. Those skills – honed as nuncio in Burundi and Guatemala – will be important in his new post. The job includes negotiating with ambassadors and other foreign diplomats, both here in Rome and at international bodies abroad.

By all accounts Archbishop Gallagher is thoroughly a “Vatican II man.” He is also refreshingly non-ideological. Most importantly, he enthusiastically supports the vision of church renewal and reform that Francis has spelled out in his apostolic exhortation, Evangelii Gaudium, essentially the programmatic blueprint of his pontificate.

The Vatican’s new foreign minister prepared for the priesthood at the Venerable English College in Rome when now-Cardinal Cormac Murphy O’Connor was rector and did his theological studies at the Gregorian University. After ordination and then three years of pastoral work in Liverpool, the then-Fr. Gallagher returned to Rome to study at the Pontifical Ecclesiastical Academy, the elite school that prepares papal diplomats. He was an Academia classmate of the Vatican’s current “interior minister,” or Sostituto, Archbishop Angelo Becciu. Now the two of them will work together as the top assistants to Secretary of State Cardinal Pietro Parolin.

But Archbishop Becciu is likely to be replaced before the end of next summer when he completes five years in office. There’s already speculation that Archbishop Gabriele Caccia, nuncio in Lebanon, will replace him. Caccia and Parolin worked together, effectively as undersecretaries in the Secretariat of State, at the end of John Paul II’s pontificate and up until 2009 under Benedict XVI.

Eleven weeks have now passed and the prefect’s chair at the Congregation for Divine Worship and Discipline of the Sacraments (CDW) still remains vacant. It is unprecedented in contemporary history for a major Curia office to be this long without a head. Until the new boss is appointed, the CDW secretary, English Archbishop Arthur Roche, is at the helm.

Formerly head of the Diocese of Leeds, he got his current job in the summer of 2012. And though he’s in the No. 2 slot, he effectively became top dog this past August 28 when the pope sent the CDW prefect, Cardinal Antonio Cañizares, back to his native Spain as Archbishop of Valencia.

About a week ago Francis also sent one of the cardinal’s most trusted aides back to Spain. Msgr. Juan Miguel Ferrer Grenesche was one of two undersecretaries who lost their jobs at Divine Worship on November 5 when Papa Francesco folded their dual positions into one and gave the post to Italian Montfort Missionary Father Corrado Maggioni. The other undersecretary sent packing was Marist Father Anthony Ward, an Englishman who had been there since 1996.

The change is hugely significant. Msgr. Ferrer, who celebrates the Tridentine Mass when requested, came to the CDW under the patronage of Cardinal Cañizares, who was his bishop in Spain. And Fr. Ward is believed to be one of the primary authors of Liturgiam Authenticam, the Vatican’s 2001 instruction that basically mandated liturgical texts to be slavishly transliterated from the original Latin into the vernacular. Fr. Ward was a nemesis of the old ICEL (International Commission for English in the Liturgy), which the Vatican eventually “reformed.”

The appointment of Fr Maggioni as the new CDW secretary signals a change in direction for one simple reason. He is considered close to the thinking of Archbishop Piero Marini, the former papal master of ceremonies and still the Vatican’s primary promoter of post-Vatican II liturgical reform.

Readers should be pleased to know that Massimo Faggioli, one of brightest young historians of the Second Vatican Council, will be a main fixture at Global Pulse magazine. The popular author and professor at Minnesota’s St. Thomas University will provide expert analysis every two weeks, helping our readers better understand the changes and reforms Pope Francis is implementing at the Vatican and throughout the church.

Massimo comes from the northern Italian city of Ferrara. And since he, his American wife, and their two small children regularly crisscross the Atlantic Ocean for both work- and family-related visits, I’ve seen a lot of him here in Rome over the years. Massimo is not only a colleague (he writes regularly in Italian papers), but he has also become a good friend. Like many of you, I first came to know of him through his writings.

Right now he’s putting the finishing touches on his ninth book. It’s titled A Council for the Global Church: Receiving Vatican II in History. It’s expected to be out next April. Vatican II: The Battle for Meaning (New York, Paulist Press), which he published two years ago, solidified his credentials among many theologians, bishops, and Catholics interested in the Second Vatican Council and what it means for today’s church.

Massimo Faggioli is one of the youngest and most perceptive historians that specialize in Vatican II studies. Still in his early forties, he did his doctorate at the University of Turin and began working twelve years at the Istituto per scienze religiose in Bologna under the direction of Giuseppe Alberigo, who also directed his doctoral thesis. The late Italian historian was general editor of the monumental, five-volume series, History of Vatican II (Orbis/Peeters, 1995-2006), and one of the pioneers of the so-called “Bologna School” of theological history.

We at Global Pulse warmly welcome Massimo as a regular columnist.