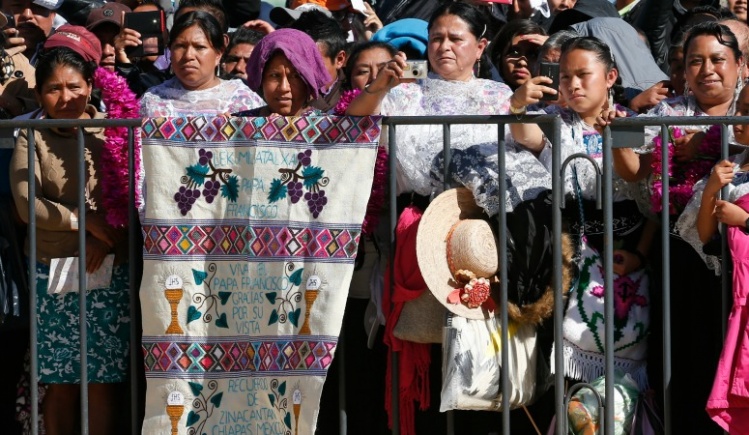 This week’s letter is sent from the town of San Cristóbal de las Casas where Pope Francis visited on Monday as part of his five-day, whirlwind tour through four different states of Mexico.

The 79-year-old pope has knocked himself out during this trip, spending long hours each day individually meeting and embracing hundreds and hundreds of people. That’s when he’s not been celebrating mega-masses, giving talks to large groups or standing atop his open-air popemobile for lengthy rides through streets lined with raucous crowds.

His fatigue has been obvious, but it has not stopped him from giving yet one more greeting each night before going to bed. He has not disappointed the throngs of people who wait for him in the dark outside the apostolic nuncio’s residence in Mexico City, which he’s made the base for his various jaunts elsewhere in the country.

It was never to be taken for granted that Papa Francisco’s twelfth foreign trip in less than three years would be a cakewalk. Those who understand a bit about Mexico and Latin America knew he was facing some daunting challenges by coming here. But no one who has been closely following his pontificate has been surprised by how masterfully he’s handled it.

First of all, he came here in the shadow of John Paul II, whom the Mexican people deeply loved, and, oddly enough, considered one of their own. That’s because the Polish pope made Mexico the destination of his very first trip as Bishop of Rome, returning here several more times during his long pontificate. His legacy still looms large in this vast country.

Mexican Catholics, who form the largest group of Spanish-speakers in the pope’s Latin American flock, were hurt that Francis did not come here earlier. But judging by the reception he has received so far, people here obviously believe he’s earned some of that same deep affection that they’ve always reserved for his now sainted predecessor.

Secondly, most Europeans and North Americans (that is, folks from Canada and the U.S.) generally think that because Francis is from Argentina he must be an instant hit with everyone in Latin America.

That’s not quite true. For one thing, Papa Jorge Mario Bergoglio may have been born in Buenos Aires, but his DNA is one-hundred percent Italian. He hasn’t got a drop of indigenous blood in his veins, as so many in Mexico have. And it shows. The pope’s very white face was baked to the color of a ripe tomato on Monday under Chiapas’s scorching sun. Someone obviously forgot to apply the sun block!

And without getting into polemics, let’s just say the very fact that Francis is an Argentinean does not immediately gain him extra points anywhere in Latin America. It’s probably the opposite. But again he’s earned them and exponentially.

The pope, as expected, has been preaching a compelling message that brings comfort to the poor, the suffering and the marginalized. But—is anyone surprised?—he has not failed to forcefully call to account the powerful, corrupt and selfish – especially those among them who wear the mantle of religious authority.

The colorful little town of San Cristóbal de las Casas is a real gem. It is a gentle, safe and entertaining oasis in the predominantly Mayan-inhabited state of Chiapas, a place that be can be dicey and dangerous in its more rural outposts.

San Cris, as the locals sometimes call it, is absurdly inexpensive for Europeans and Americans. Its brightly dressed (and mostly) Indian residents—surrounded by broods of tiny children—sell handcrafted textiles and jewelry in makeshift markets or along sidewalks and squares.

There’s plenty on offer by way of street food, family-run cantinas and even up-scale restaurants, while the young (and not so young) can enjoy a pulsing nightlife that features lots of watering holes with live music from jazz ensembles to mariachi bands.

Yes, this town does a thriving tourist business. But it also attracts lots of religious pilgrims, especially those interested in Catholic social teaching and Latin America’s theology of liberation.

These come to visit the tomb of Don Samuel Ruiz, bishop of the Diocese of San Cristóbal de las Casas from 1960-2000, and see the indigenous people whom he empowered with ownership of their local church in the aftermath of the Second Vatican Council.

There is no need to spill lots of ink on Don Samuel in this space. Much has already been written about his legacy and how the Vatican during the time of John Paul II did everything to make his life difficult.

The saint never came to San Cristóbal during his several trips to Mexico. That’s why it was so remarkable when Pope Francis did and even prayed at Don Samuel’s tomb. This came exactly five years and three weeks after the revered bishop’s death at age eighty-six in 2011.

There are two other graves that Don Samuel’s indigenous followers, but few others even in the area, consider sacred here. They are located in the main cemetery on the outskirts of town.

There, under a large fur tree, lie the simple gravestones of two Catholic missionary sisters from Belgium who came to Chiapas in the late 1970s to work with Bishop Ruiz in accompanying the Mayan people and standing up for their rights and dignity.

Sr. Béatrice Regnier and Sr Danièle Sienard were killed in a mysterious auto accident on May 4, 1983 while driving back to the Indian village where they lived following a meeting in San Cristóbal with the bishop.

Henchmen for the region’s wealthy landowners and oligarchs had long harassed and bullied these two courageous women—who died at ages forty-two and forty-three—because of their untiring work among the exploited Mayan people.

Sr Béatrice, it turns out, was the niece of Archbishop Jean Jadot who was apostolic delegate to the United States from 1973-1980 and later president of the Vatican office that eventually morphed into the two present-day pontifical councils for interreligious dialogue and culture.

The two Belgian sisters are just two of many foreign missionaries—and countless local religious and lay catechists—who have suffered these past decades for trying to make the gospel of mercy, justice and solidarity become flesh in Chiapas and all of Latin America.

“O how I desire a church that is poor and for the poor.”

Pope Francis made the proclamation on March 16, 2013, just three days after being elected Bishop of Rome. And like we sometimes do even with words attributed to Jesus, many Catholics—including too many clerics—have tried to soften and reinterpret the true meaning of the pope’s manifesto.

Events of the past several days, especially those dramatically unfolding during the papal visit to Mexico, should clarify any doubts about what kind of poverty and what sort of poor Francis is calling his church to embrace.

Certainly, he is summoning us to generously carry out the spiritual and corporal works mercy. But it’s clear he also believes that it’s not enough for us to be charitable towards the materially or morally impoverished if we do not give up our own societal privileges, false sense of security, and, yes, over-reliance on material resources.

Among the ways he spelled this out here in Mexico was through a forceful address on Saturday in which he told the country’s bishops what kind of leaders the Church does and does not need.

“We do not need ‘princes’,” he told them, “but rather a community of the Lord’s witnesses.”

He then warned them not to allow their vision to be “darkened by the gloomy mist of worldliness” or to be “corrupted by trivial materialism or by the seductive illusion of underhanded agreements.”

He’s been even more case-specific on this theme with bishops back in Italy. For example, Francis has made it clear that the church’s pastors should stay out of politics, a place where some of the country’s most important bishops have comfortably made a nest.

An explanation point was put to that this past week when it was announced that Papa Bergoglio would forego a planned trip to Genoa next September, becoming the first pope in twenty years not to attend Italy’s national Eucharistic congress. Could it be a mere coincidence that the Archdiocese of Genoa is headed Cardinal Angelo Bagnasco, lame duck president of the Italian bishops conference and a strong advocate of the church’s involvement in political affairs?

But I would suggest that it was Pope Francis’s meeting in Cuba last Friday with Patriarch Kirill of Moscow that showed in a strange way that most people have probably failed to grasp just how exigent it is to being a poor church. The pope made no demands and set no pre-conditions for the historic meeting with the leader of the world’s largest Orthodox Church. He could have, because that’s exactly what his predecessor always did.

There was good reason for that—to avoid showing weakness, allowing the Russians to take advantage of any good will or naïveté and having to pay too high a price without first securing specific guarantees. The Vatican’s traditional way of engaging with other churches, religions, governments, and peoples has been, whenever possible, to operate from its position of strength and wealth, whether that be cultural, spiritual, or material.

It has followed an Italian type of political pragmatism summed up in the idiom, forte con i deboli e debole con i forti—basically, “be strong with the weak and weak with the strong.” But Pope Francis does not buy into this mentality. And the meeting with Russian Orthodox Patriarch—as well as his visit to Mexico—has illustrated that.