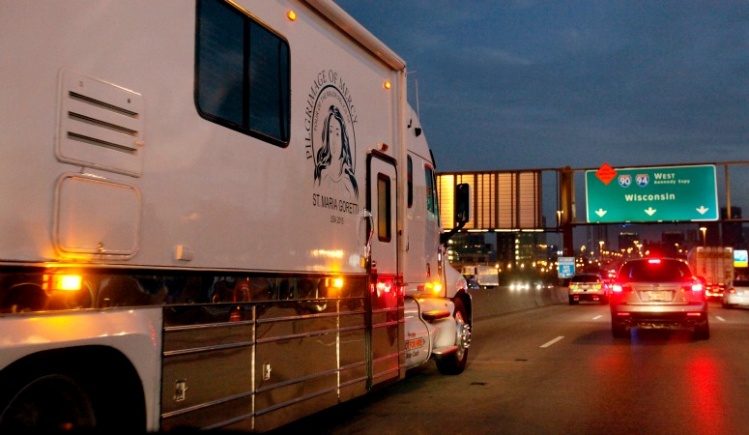 If memory serves, this scene is unfolding sometime around 1970. My mother embraces the frightened toddler to calm her down. “Don’t be scared, sweetheart,” mom says. “That’s not Dracula. It’s your great grandfather.”

Displaying photos of deceased loved ones lying in their coffin was one of the strange customs practiced by immigrant great-grandparents from Hungary. My grandmother, now 95, has kept the custom (as it were) alive.

But the other side of my family and most other people I know think the practice is outright bizarre, if not absolutely ghoulish. Probably most families have little rituals or habits that others find odd.

More and more people today even see things that were once considered normal, like making weekly visits to the cemetery, as outlandish. My family (at least one part of it) and I do not, by the way. We continue to religiously visit and decorate the graves of our relatives.

There is something sacred about the going to—and praying at—the place where their mortal remains now rest. Obviously, our Christian faith tells us they are no longer there. But making the pilgrimage to their tomb or grave helps us keep their memory alive and reminds us that we are part of a vast and unending network of all believers, both dead and alive.

This is the communion of saints.

However, in the case of those who are officially beatified or canonized, the Vatican has turned this pious practice on its head. Over the past couple of decades it has begun temporarily removing these holy corpses from their normal resting spot—usually a church or a shrine—and taking them on tour.

Last year the fully dressed body of St. Maria Goretti (under a glass case) was flown out of Italy for an eight-week, 20-state tour throughout the United States. And the sacred corpse of the Blessed Pier Giorgio Frassati (in a closed wooden box) will be jetted to Krakow this summer for World Youth Day just as it was for the 2008 international Catholic youth fest in Australia.

A priest named Fr. Carlos Martins—member of a religious order founded in 1985 called, “Companions of the Cross”—has a full-time “ministry of evangelization” that entails him putting relics on display around the world. His organization, “Treasures of the Church,” oversaw last year’s Goretti Tour.

It has taken some 150 relics to forty-eight U.S. states, as well as to Israel, France, Italy and Mexico. Evidently, the idea is to allow people who may not be able or inclined to travel to such shrines the opportunity to venerate these relics in a more convenient venue.

Or is it aimed at something else—such as drawing a crowd or raising funds? Just have a look at the donor button on the “Treasures of the Church” website.

So much for the prelude…

Allowing the pious and the curious to view their fully clad corpses in caskets made of bulletproof glass is meant to be one of the major highlights of the Holy Year of Mercy. The rationale is that these two priests, who spent long hours in the confessional forgiving peoples’ sins, are perfect models for the Jubilee. It is said that Pope Francis himself was the one that wanted their relics brought to Rome.

Now some Catholics will undoubtedly find this as bizarre as hanging up a photograph of a dead relative lying in a coffin. But that is only half the story. The manner is which these “relics” were brought to Rome should at least raise a few eyebrows and lead people to wonder if Italian society is ever going to fully embrace the twenty-first century.

Neither Padre Pio, who lived in the southern Italian region of Puglia, nor Fra Leopoldo, a Croat who lived in the Veneto in the north of Italy, ever made it to Rome during their lifetimes. But their journeys this week to the Eternal City were, believe it or not, carried out under heightened security measures and protocols normally offered only to heads of state.

Several hundred state and paramilitary police were given extra duty to line streets and officially escort the body of St. Padre Pio as it was driven in a special truck the entire 500 kilometers from its Shrine of San Giovanni Rotondo to Rome. Italian government officials even ordered a no-fly zone around the shrine during the operation.

A police detail also escorted the ambulance that transported the body of St. Leopoldo a similar distance that lies between Rome and its normal resting place in Padua.

Extraordinary security measures—including re-routed traffic patterns and street closures, the setting up of metal detector check-points and the stationing of snipers on roof-tops—are to be imposed around the places where the holy corpses will be housed during their Roman sojourn.

Some 800-1000 extra police will be deployed during two ceremonies involving the pope and the relics, concluding with a big Mass at St. Peter’s on Ash Wednesday.

State authorities say they expect 700,000 or more people to show up for the grand finale with the visiting saints.

Pope Francis concluded the special Jubilee of Consecrated Life with an audience for men and women religious on Monday, followed by a Mass with them the next day.

In his unscripted talk to his fellow religious, the pope said it pained him to see that fewer and fewer vocations were coming forth from most communities.

“Why has the womb of consecrated life become so sterile?” he asked rhetorically. “Some congregations are experimenting with ‘artificial semination,’” he said to some chuckles in the crowd. His point was that, out of desperation, these orders are too easily accepting just anyone who wants to join them.

“And then there are problems inside,” he said. “We must discern carefully if there is a true vocation and then help it grow,” he warned.

But in dealing with the lack of vocations, this is ultimately Pope Francis’s bottom line: “We must pray more. And pray without growing tired.” That’s what every pope and most every bishop has been saying the past four or five decades. Either we aren’t praying correctly or God is not listening.

Our various prayer initiatives have done little to raise the number or the quality of religious vocations. The pope has rightly insisted to bishops on other occasions that stricter criteria and greater discernment are needed for screening candidates for the priesthood.

A sex trafficking incident involving a 23-year-old seminarian studying at the Pontifical Josephinum College for the Diocese of Steubenville in Ohio is a reminder that the current selection and formation system is still, in many ways, failing the Church.

Without going into the details of the very disturbing and stomach-turning allegations, it is enough to point out that the young man in question was from another state (Vermont) and rejected by dozens of dioceses and religious orders before Steubenville took him in.

“I stopped counting after forty-five rejections of how many diocese and religions orders that declined him for his physical disability, for his vision, for his orthopedic and health impairment,” said the young man’s mother.

But the rejections more likely had little to do with the so-called health impediments—at least not those of a physical nature. Although the fellow has some vision impairment, he’s not blind. But those in charge of vetting seminary candidates for the Diocese of Steubenville sure are blind. Or they are just refusing to read the warning signs.

Prayers, alone, will not fix this broken system.