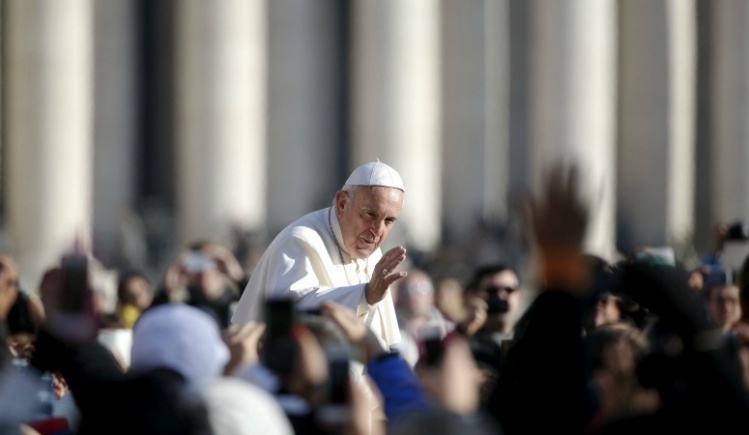 When Pope Francis speaks, people listen. And blessed are those who can understand him without the need for a third party translation. That was clear again last week during his moving, six-day papal visit to Kenya, Uganda, and the Central African Republic.

But before citing any examples, it is important to admit that providing good simultaneous translations can be quite a challenge, especially for this pope. The Vatican-employed priests who do so, get it right nearly every time. But not always. And in certain, very clear cases one wonders if this is because they misunderstand Francis’s original words or are actually trying (consciously or not) to make those words more “Vaticanly correct.”

A perfect case in point is the pope’s references to himself when sharing an anecdote or posing a rhetorical question.

“Padre, pero…” he began in his native Spanish at one point in his off-the-cuff address to young people in Nairobi. For some reason the monsignor who was translating into English that day felt the need to render it, “But Holy Father...” Holy Father? Francis never refers to himself as Holy Father—unless he’s reading a speech someone else wrote for him. It is simply just “Father.”

Unfortunately, the above-mentioned incident is not isolated. It is part of a regular pattern. Thankfully, the Vatican Secretariat of State has been much more careful not to “clean up” or correct the pope’s free-flowing remarks (while also avoiding the horrible sin of transliteration) in the written transcripts it provides afterwards.

Though the scribes at the Vatican tended to do this earlier in the pontificate, they have since been more faithful to the pope’s own Pact-of-the-Catacombs-like rejection of “names and titles that express prominence and power.”

But that doesn’t mean we have to jettison the term “Holy Father.” Not at all. As we hear in several of the various Eucharistic prayers used at mass this is actually how we address the first person in the blessed trinity.

The so-called Vatileaks II trial of five people connected to the leaking and publication of confidential Vatican documents has not been wrapped up as quickly as Pope Francis had hoped.

“I would have liked this to be over before December 8, for the Year of Mercy,” he told journalists last Monday while flying back to Rome from his Africa trip. But he acknowledged that was not possible now, given that at least one of those on trial had changed attorneys and requested more time to prepare their case.

“I want all the defense lawyers to have time... so there is a freedom of defense,” Francis said. And when asked what he intended to do to stop further Vatican corruption as detailed in the leaked documents, the pope replied: “Well... I just thank God that there’s no [longer] Lucrezia Borgia!”

But there is someone, a former Vatican official, who is causing some havoc. Francesca Immacolata Chaouqui is one of three people being tried for conspiracy to “steal” the documents and pass them on to two journalists whom the Vatican, bizarrely, has also put on trial.

The most prominent of the conspiring trio is Msgr. Lucio Vallejo Balda, a Spaniard who is one of 4,000 clerics worldwide who belong to the Opus Dei-sponsored Priestly Society of the Holy Cross.

He was called to Rome in September 2011 to be secretary general (second-in-command) at the Prefecture of the Economic Affairs of the Holy See. And because of that position he was named to a committee Pope Francis set up in the summer of 2013 to offer advice on reforming Vatican finances.

The pope told journalists on the plane he believed Msgr. Vallejo was the one who recommended Ms. Chaouqui for her position on the same committee. In recent days more leaked documents and angry declarations have sizzled over the internet, painting lurid scenes of this duo’s allegedly less-than-pious relationship.

It is not clear how Vatican City State’s civil magistrates will proceed against the priest. But the publication of the original charges suggest that the laymen who preside over this civil court may be slightly infected with a type of clericalism that can be detected just as much in certain non-ordained members of the Church as in some of those who wear the collar.

Among the various charges, the Vatican magistrates say the two journalists on trial “solicited and exerted pressures, above all on Vallejo Balda, in order to obtain confidential documents and information.” One is left speechless. Did these hacks put a gun to the monsignor’s head? Did they threaten to blackmail him if he did not hand over the goods? They just as well may have said, “The priest was a naughty boy, but those conniving journalists made him do it.” The inference from these written charges is that, unlike the man Vallejo), the woman (Chaouqui) participated willingly—just as her ancient ancestor did in the Garden of Eden.

Twelve big gestures to demonstrate God’s mercy. That’s what Pope Francis is planning for the Jubilee Year, which he pre-launched last Sunday when he opened the Holy Door of the cathedral in Bangui, Central African Republic.

“There will be many gestures, but on one Friday each month I will do something different,” he said in a brief interview published Wednesday in Credere, the jubilee’s official weekly magazine in Italian.

The pope will officially begin the Holy Year of Mercy for the worldwide church next Tuesday when, as in Africa, he throws open the Holy Door of St. Peter’s Basilica.

He will also celebrate a large outdoor Mass that day, which is the Feast of the Immaculate Conception and the fiftieth anniversary of the close of the Second Vatican Council (1962-1965).

It’s not clear what type of grand gestures of mercy Francis is planning for the yearlong jubilee. Certainly there are many Catholics—both among the baptized faithful and their ordained ministers—that await a merciful decision from the pope that will help them repair broken relationships with their family of faith.

Among others, they include people in “irregular marriage situations” (a canonical term the pope loathes) and priests who have left the active ministry for various reasons. Is Francis willing to find a way in to apply God’s mercy so that it can heal these and other situations?

Certainly, any attempt to do so will be opposed by some members of the church. They include—as he noted at the end of the last synod gathering—even bishops with “closed hearts which frequently hide even behind the Church’s teachings or good intentions, in order to sit in the chair of Moses and judge, sometimes with superiority and superficiality, difficult cases and wounded families.”

They also include Catholic “fundamentalists,” as the pope described them on his plane ride back from Africa. “Fundamentalism is an illness found in all religions,” he told journalists.

“We Catholics have some (fundamentalists). No, not some—a lot who believe they have the absolute truth and go around sullying others through calumny, defamation...” he said.

Hopefully, the Year of Mercy will preserve us all from falling prey to fundamentalist tendencies. As Francis said in his interview with Credere, “Each of us should say: ‘I’m a poor wretch, but God loves me as I am; so I should also love others in the same way.’"