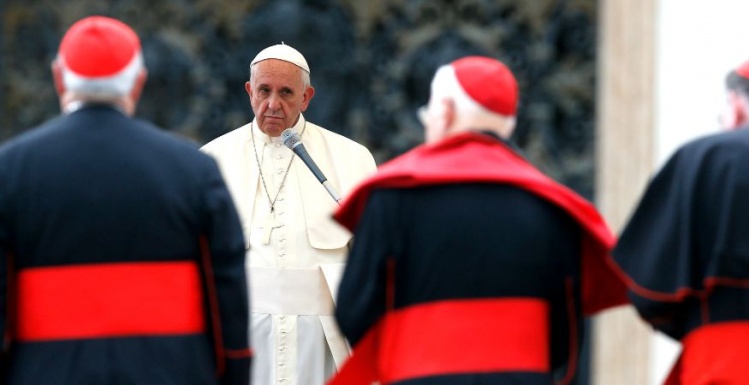 This past Tuesday, September 1, was the first annual World Day of Prayer for the Care of Creation. Pope Francis announced the initiative only a few weeks ago—on August 10, to be exact. And many immediately touted it as an important step towards galvanizing the world’s 1.2 billion Catholics to take up the urgent ecological concerns that the pope laid out so prophetically (and, for some, controversially) in his recent encyclical, Laudato Si’.

The prayer day initiative was also heralded as a significant ecumenical gesture, seeing that the Bishop of Rome was merely adopting a practice that the Ecumenical Patriarch of Constantinople had already established within the Orthodox Church almost twenty-five years ago.

But does anyone remember that the World Day of Prayer for the Care of Creation even took place this week? Or that Pope Francis marked the day by presiding at a Liturgy of the Word service in St. Peter’s Basilica that was attended by foreign ambassadors accredited to the Holy See, cardinals, bishops and other Vatican officials?

If you did not know, it’s not your fault. There was nothing in the media about it. And why would there have been?

In one simple act of releasing a new papal document on the upcoming Extraordinary Jubilee of Mercy, the Vatican completely killed all interest in the prayer day.

The Holy See Press Office on Tuesday morning gave accredited journalists embargoed copies of the text (in seven languages) and by the time of its official release a couple of hours later at Roman noon, the headlines were exploding all over the internet, Twitter and other social media.

“Pope to allow priests to forgive abortion during Holy Year,” was the most common variation.

“Pope allows even Lefebvrists to get Holy Year indulgence,” said another caption (mostly in the Catholic media), a reference to Francis’s decision to permit the Neo-Tridentinist priests of the schismatic Society of St. Pius X to grant the absolution necessary for the indulgence.

Yes, the pope’s letter provided some very tantalizing news and has created quite the buzz. By why release it on the very day that even a student of Journalism 101 could have known it would kill all interest in the World Day of Prayer for the Care of Creation? After all, the Jubilee Year of Mercy does not begin until December 8, more than three months away.

Pope Francis is a master tactician and what he did this past Tuesday was make a move to outflank various groups and people that continue to oppose many of his initiatives.

He sacrificed his fledgling creation day celebration (no worries, it’s an annual event) in order to throw a bone to critics inside the church, including cardinals and bishops, that are not at all on board with his encyclical, Laudato si’. And by doing so he also tossed another bone—and a challenge—to hard-line traditionalists who see his theology of mercy as wishy-washy and a threat to certain church teachings, especially on marriage.

There is no doubt that Francis wants the Synod of Bishops to find a way to develop the church’s doctrine and practice pertaining to failed marriages and other related issues. Otherwise he would never have asked Cardinal Walter Kasper to preface the first Synod session with theological proposals to explore possibilities for a doctrinal/pastoral move forward.

The pope must have been shocked at the fierce pushback Cardinal Kasper and his allies provoked. His announcement last June of the upcoming Jubilee Year of Mercy seemed to be aimed, at least in part, at softening the hard-heartedness of the opponents of doctrinal development. But it barely made a dent.

With this week’s letter Francis has taken another shot, especially by allowing the Lefebvrists—also critics of Cardinal Kasper and his influence at the Synod—to “validly and licitly” absolve sins in the confessional.

The pope said he decided this at the behest of “several Brother Bishops.” It is likely that the bishop-emeritus of Rome, Benedict XVI, was one of them. He made healing the Lefebrvist schism and enhancing neo-Tridentinist groups within the Church a major project of his pontificate. There are still many bishops and cardinals that support this thrust and some of them just so happen to be the part of the bloc at the Synod that opposes any change in marriage rules.

Pope Francis is walking through minefield of a very divided church, and an increasingly divided hierarchy, and he must keep both sides content to some extent.

That’s why something else that happened on Tuesday, but which went unnoticed by just about everyone, is also important to note. The pope appointed Archbishop Piero Marini, president of the Pontifical Committee for International Eucharistic Congresses, as head of a special liturgical commission at the Congregation for Oriental Churches. This is hardly an earthshaking appointment.

Archbishop Marini is the former longtime Master of Pontifical Liturgical Ceremonies and an unabashed proponent of the Vatican II liturgical reforms. The retrodox neo-Tridentinists that grew in prominence during the last pontificate absolutely despise him, evidenced by the vitriol they spread when rumors went round last year that Pope Francis was about to name Marini prefect of the Congregation for Divine Worship.

It is said that a very senior bishop in Rome eventually took the unprecedented step to advise Francis not to appoint the Vatican II liturgist to the post if he wanted to keep peace in the church. So, instead, he chose Cardinal Robert Sarah—a Guinean who supports the Tridentinists and opposes the theology of Walter Kasper.

By announcing Archbishop Marini’s appointment on Tuesday, even to a minor post, Pope Francis made another announcement—he’s keeping score.

Speaking of the Synod of Bishops, Ignatius Press has published yet another book on the topic called, The Rigging of a Vatican Synod? An Investigation of Alleged Manipulation at the Extraordinary Synod on the Family.

The book’s author is Edward Pentin, an English journalist who has been in Rome the past decade and writes for the National Catholic Register and Zenit, among others. His new book apparently is a broader development of a series of reports he wrote on the 2014 Synod gathering.

“Did key leaders of the recent Extraordinary Synod of Bishops try to manipulate the outcome to support a change in Catholic practice and perhaps in Catholic teaching on divorce and remarriage and same-sex activity? Did they undermine Pope Francis' vision of an ‘open’ discussion?” says a blurb describing the new volume.

At the center of the book is the Synod’s secretary general, Cardinal Lorenzo Baldisseri. Pentin takes seriously those critics who claim the cardinal and his cronies tried to “predetermine the outcome of the Synod’s deliberations and its documents”.

The plot thickens. But don’t take my word for it. Ask Cardinal Wilfrid Fox Napier of South Africa, who calls the book “an absolutely fascinating account of Synod 2014, especially the machinations surrounding it.”

That’s a pretty good endorsement. Cardinal Napier is one of the delegated presidents of the next Synod gathering—next month at the Vatican.