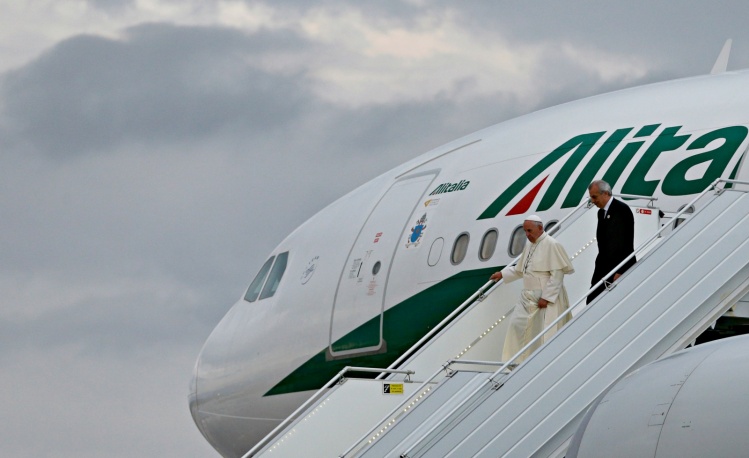 The Eternal City’s most popular resident, Pope Francis, is out of town this week for what has become a euphoric “homecoming” to three Spanish-speaking countries in his native Latin America.

The Argentine pope flew to Ecuador on Sunday with a scaled-down papal entourage in the front section of an Alitalia jetliner and a load of journalists and photographers in the back.

Pietro Parolin, the Vatican Secretary of State, is the only cardinal to accompany Francis on the journey, which also includes visits to Bolivia and Paraguay. A new and most likely permanent addition to the seguito papale (as the papal retinue is called in Italian) is Msgr. Dario Viganò who was recently appointed prefect of the freshly-established Secretariat for Communications.

Naturally, Fr. Federico Lombardi, director of the Holy See Press Office, is also in the group. And so is his younger confrere, Fr. Antonio Spadaro, SJ, the man many think will end up replacing him as Vatican spokesman.

But there is one notable figure that is missing from the “all the pope’s men”: Cardinal Marc Ouellet, best known as prefect of the Congregation for Bishops. It is in his capacity as president of the Pontifical Commission for Latin America (CAL) that he should have been included on the papal trip. In addition, he is fluent in Spanish, having spent more than a decade studying and teaching in Colombia when he was a member of the Sulpician society of priests.

Fr. Lombardi said the cardinal had “other commitments” and that was why he was replaced by his second-in-command at CAL, Guzman Carriquiry, an Uruguayan layman who has worked in the Vatican for over forty years.

What kind of a commitment keeps a cardinal from making an historic pastoral visit with the Pope? Francis sent Ouellet to central Italy to preside at the closing Mass for the Jubilee of St. Celestine V, the pope who abdicated in the late 13th century—and he may have done so explicitly to keep him out of the papal entourage to Latin America.

The word around the Vatican is that Papa Francesco and Cardinal Ouellet don’t exactly see eye-to-eye on almost anything to do with bishops or the church in the Americas. It seems Francis had to wait until the cardinal was out of Rome last September to push through the surprising appointment of Blase Cupich as Archbishop of Chicago.

Up until recently Celestine V was famous for being the last pope to voluntarily resign. That was until Benedict XVI announced on February 11, 2013 that he, too, would relinquish the papacy. “Fr. Benedict,” as he now says he wants to be called, opted for a much different life of retirement than Celestine.

The latter had been a monk before being elected pope and after he lay aside the papal crown for the second time (he actually bears the distinction of being the only pope to have been crowned twice!), he returned to monastic life as a hermit hundreds of miles away from the city.

Of course, Benedict XVI, now 88, chose quite a different path than Celestine. He decided to stay in the Vatican, continue to wear the white papal cassock, and be called “Pope Emeritus.” He also, of his own volition, said he would spend the rest of his life “hidden” away in quiet study and prayer for the church.

But Fr. Benedict has not been as rigorous in enforcing his self-imposed silence as he was in muzzling certain theologians during his Cardinal Ratzinger years as prefect of the Congregation for the Doctrine of the Faith (1981-2005). The former pope has, on at least three or four occasions, shared his views on a variety of topics relating to the life of the church and, when they were part of private correspondence, he’s allowed them to be made public.

But last Saturday, for the very first time since his resignation, he gave a semi-public speech or mini-lecture. And the Holy See Press Office even published it in its daily bulletin. The talk came during a ceremony out at the papal summer residence, Castel Gandolfo, where Benedict is spending two weeks of holidays at the invitation of the travelling Pope Francis.

The Pontifical University of John Paul II in Krakow and the Academy of Music in Krakow presented him with honorary doctorates.

Here’s one of the takeaway lines from his 1,300-word address: “Without [St. John Paul II], my spiritual and theological journey would not even have been imaginable.” The former pope also had some things to say about sacred choral works, tensions surrounding liturgy and the Second Vatican Council, the unrivaled uniqueness of Western music and its debt to Christian faith, etc…

The residents of Castel Gandolfo are ecstatic that Benedict XVI is spending some time at the papal villa, something Pope Francis never does.

The town’s mayor, Milvia Monachesi, said that when she was in the Vatican last month with a delegation from the Focolari Movement, she and the Argentine Pope had a brief exchange.

“Mayor, are you angry at me?” he allegedly asked her, half jokingly.

“We miss you,” she replied. And then she added, “Just as you teach us, we are not giving up hope.”

The townspeople have been complaining that Francis has put a real damper on the quaint village’s economic life because he hardly ever visits and has never spent any significant period of time there. Popes are a big tourist attraction. And the folks at Castel Gandolfo can only dream of what the wildly popular Francis would mean for local businesses.

John Paul II used to go to the papal summer villa for a few days at a time after Christmas and Easter. He also spent some time there during the hot months. But he did not go as much as his successor, Benedict, who spent weeks and even months at a time there.

And who could blame him? Summers in a tourist-crowded and automobile-congested city like Rome only increase the already beastly warm temperatures. August used to be known as the Eternal City’s hottest month, but for the past several years July has become notorious for being even hotter, turning the town into the Infernal City!

This can be an extremely dangerous time for Rome’s elderly population, not all of whom have the possibility to head off to cooler places in the hills or at the seaside. Fortunately, the Sant’Egidio Community and some other organizations have set up programs to look after the pensioners during the summer months. For example, this will be the eleventh consecutive year that Sant’Egidio is running an initiative called Viva gli anziani (long live the elderly). The program supplies a telephone help-line, instruction on how to deal with the heat, and a list of cooler places where to go for recreation.

No doubt, the mayor and merchants of Castel Gandolfo would not mind if their hilltop town were on that list.