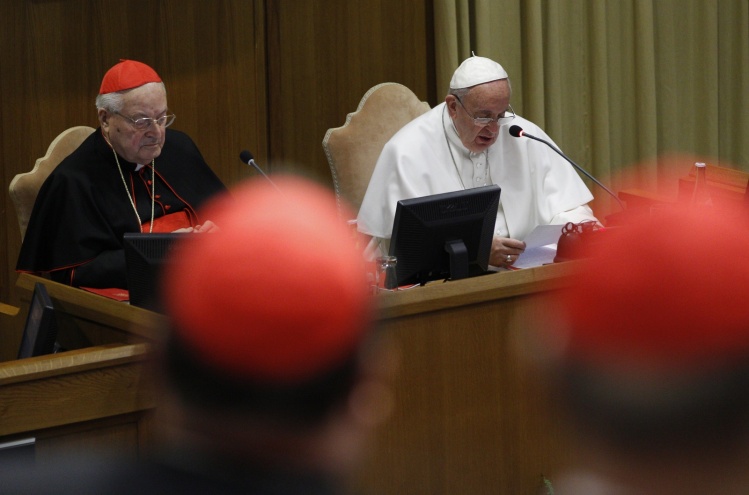 In all the years since the Synod of Bishops was instituted in 1965, no pope has ever begun an assembly’s first working session with an address like the one Pope Francis gave on Monday. His most recent predecessor offered Scripture reflections during the morning prayer session, but he never told the bishops how he expected them to carry out their business. It was pretty clear what Benedict XVI expected, and even more so what John Paul II demanded. But they never articulated it before the entire assembly. Pope Francis sure did.

“This is a basic general condition: speak clearly,” he told the bishops before the Synod on the Family got underway. “You must say everything that you think with parrhesia,” he continued, using a Greek word that means speaking with frankness, honesty, and boldness. If you think that’s obvious, you’d better think again.

I witnessed a cardinal upbraid an auxiliary bishop at the first Synod for Europe in 1991, after he dared to question the church’s ban on Communion for divorced and remarried Catholics. The bishops were told through various channels that John Paul II did not want to hear any of that. Papa Francesco says there’s no such prohibition.

“After the last consistory (February 2014), at which we talked about the family, a cardinal wrote me and said: it’s a shame that some cardinals didn’t have the courage to say certain things out respect for the pope, reasoning that perhaps the pope might think differently,” Francis told the bishops. “This is not good, this is not synodality; because one must say everything he feels the Lord wants him to say… without fear,” the pope said. “And so I ask you, please, these two attitudes of brothers in the Lord” – he continued – “Speak with parrhesia and listen with humility.”

In the days preceding the synod, several church-related conferences were underway here in Rome. They included the Forum on the Family, a two-day gathering of organizations belonging to Catholic Church Reform International (CCRI). This global network, which claims to have representatives from some sixty countries, called on the synod to be “inclusive of Catholic families in all their diversities” and to allow all the baptized to share in “decision making within the church.”

I was invited to offer suggestions on navigating “Vatican bureaucracy” and share my experience of being a participant at six synod assemblies between 1989 and 2000 while working at Vatican Radio. Across town, meanwhile, the European Forum of LGBT Christian Groups held a one-day conference called “The Ways of Love.” International delegates appealed to the synod to devise a new and more inclusive pastoral approach to “homosexual and transsexual people.” Speakers included Bishop Geoffrey Robinson, the retired Auxiliary of Sydney, and British theologian James Alison. Both these meetings caught the media spotlight.

But another important gathering in Rome escaped the attention of just about everyone outside its closed doors. It was a session of the Vox Clara Committee. That’s the group of senior residential bishops the Vatican set up in 2001 to police the work of the International Commission on English in the Liturgy (ICEL), a translating body founded by English-speaking prelates during the Second Vatican Council. Vox Clara’s masterpiece, of course, is the new translation of the Mass prayers (Roman Missal).

At their October 1-3 meeting, committee members began reviewing ICEL’s preliminary translation of the Rite of Exorcism. They met at Domus Australia, a multi-million-dollar pilgrim hotel that was established a few years ago by Sydney’s former archbishop, Cardinal George Pell. Curiously, he’s still Vox Clara’s chairman, even though as the Vatican’s Secretary for the Economy he’s no longer a residential bishop.

Pope Francis continues to mystify Vatican watchers by his episcopal appointments. On Wednesday he sent Archbishop Celso Morga Iruzubieta, the number-two official at the Congregation for the Clergy, back to his native Spain to be the coadjutor bishop of Mérida-Badajoz. Benedict XVI had appointed the now sixty-six-year-old priest to the secretary’s post at Clergy and then ordained him archbishop in 2011.

Since the Spaniard has spent the past twenty-seven years working in this Vatican department, one could argue it was well beyond time for him to be moved out. But the timing of Morga's transfer remains confusing. Pope Francis had reconfirmed him in his Vatican job only about a year ago, and it was believed he would have remained there for at least the completion of the five-year term to which Roman Curia officials are usually appointed. These terms are routinely extended, but Archbishop Morga’s was not even due to end until December 2015.

The Spanish prelate is a member of the Priestly Society of the Holy Cross, sponsored by Opus Dei. He’s also been a longtime collaborator of Cardinal Mauro Piacenza, the former prefect of the Congregation of the Clergy and one of the premier “Ratzingerians” in the Curia. When Pope Francis transferred the cardinal to the less important office of Major Penitentiary in September of last year, some said he was purging the Vatican’s most important offices of the former pope’s closest aides. Oddly, he moved out Cardinal Piancenza on the same day he reconfirmed Archbishop Morga.

So some might conclude that the Jesuit Pope has it in for Opus Dei, especially after recently removing an Opus Dei bishop in Paraguay. But that would be wrong. On Wednesday he also named an Opus Dei priest to be an auxiliary bishop in a diocese in Brazil.