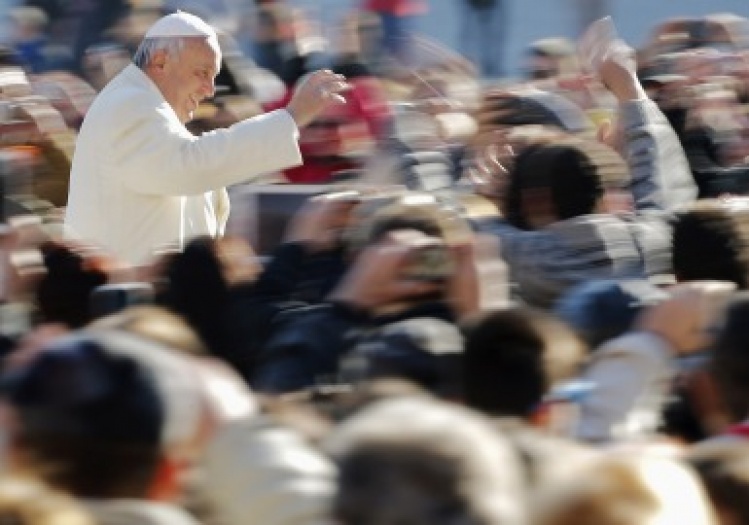 Pope Francis began the season of Lent on the morning of Ash Wednesday by doing what he does in the middle of almost every other week of the year—he held a general audience in St Peter’s Square for pilgrims and visitors from the around the world. Then in the afternoon it was just a short car ride across the Tiber River and up the Aventine Hill where he continued the tradition of celebrating Mass at the first in the series of ancient, Lenten “stational churches”—the Basilica of Santa Sabina. The Pope has a number of significant appointments on his calendar during these Forty Days of Lent, including a spiritual retreat all next week at a religious house in the Alban Hills south of Rome and a daylong pastoral visit to Naples near the end of next month. But one event that is sure to draw particular attention is his visit on Saturday evening, March 7, to the Roman church of Ognisanti (All Saints). The early 20th century parish sits outside the old city walls on the New Apia Road, less than half a mile from the Cathedral Basilica of St John Lateran. Francis is going there to mark the 50th anniversary of the first-ever papal Mass to be celebrated publicly in the vernacular. It was on March 7, 1965—the First Sunday of Lent—when Pope Paul VI offered the Mass in Italian with the parishioners of Ognisanti. This was the pre-established date for the entire Church throughout the world to begin applying the liturgical reforms called for at the still-ongoing Second Vatican Council. The reforms included replacing certain parts of the Mass in Latin with prayers and readings in the local languages. The Eucharistic Prayer was still in Latin at that point, but soon the great majority of bishops pushed the Vatican to allow for the entire liturgy to be celebrated in the vernacular, a move that continues to anger some Catholics to this day. They and others are waiting to hear what Pope Francis will to say about an issue he has said very little about up to now—the post-Vatican II liturgical reforms.

Back in the summer of 2012 the people of Rome’s Nativity of Jesus Christ Parish lost the beloved father figure that had been their pastor some thirty-seven years. Msgr Pietro Sigurani, whom we all called simply “Don Pietro”, had been taken from the parish he had helped make one of the diocese’s most dynamic. He was forced to retire at age 76 and replaced by a professor from the nearby Lateran University, Msgr Paolo Selvadagi, who was named one of Rome’s auxiliary bishops within months and also replaced. I don’t know what has become of Nativity Parish because I stopped attending shortly after the departure of Don Pietro, quite possibly the most inspiring homilist I’ve ever heard. Since then I’ve been an orphan in the “liturgical wasteland” that can be Rome, alternating between the Caravita Community (an international Sunday Mass group in English that promotes ecumenism and reformed liturgy) and a couple of Italian convents near my home. The forcibly “retired” Don Pietro, meanwhile, was named rector of the Church of Sant’Eustachio, a minor basilica one block from the Italian Senate and the Pantheon. It’s one of the hundreds of “museum churches” that decorate Rome’s historic center, an area where local residents are too few to be able to support them as vibrant parishes. Well it was. In the short time Don Pietro has been at Sant’Eustachio, which sits opposite one of the city’s most famous coffee bars of the same name, he has transformed it into a vibrant center for prayer, theological-sociological discussion and—most impressively—a welcome place for the city’s poor and marginalized. I discovered this only a couple of weeks ago when, by accident, I attended an organ concert that was held to raise funds and awareness for the church’s new outreach. It turns out that each day my old parish priest and his “Friends of Sant’Eustachio” bring poor folks in from Rome’s outskirts and give them a full, hot lunch. The “dining room” is the central nave of the richly decorated baroque church. “They tell me: ‘Don Pietro, we eat like the rich and important people here—in a grand palace!’” the priest recounted. And that is one of his objectives—to bring the poor to “the center of our attention, the center of the City of Rome and the center of Italy’s palaces of power”. More than a hundred people are “dined” each day. Says Don Pietro: “The house of God is where the poor should be fed!”

Stop the presses! For the first time ever a cardinal has been named in the tiny Central American country of Panama. You already knew that? Then you must be smarter than most of the journalists that wrote about last week’s consistory. They all got it right that Pope Francis gave the red hat to bishops in some the world’s most far-flung and even forgotten places. But most of them—including some top celebrity “Vaticanists”—seemed to stumble on the list of places that had never had a cardinal before. Myanmar, Cape Verde and Tonga were continuously put forth as the three new spots. But in most of the articles I read, Panama was not in that list. It should have been. Perhaps it’s because neo-Cardinal Jose Luis Lacunza Maestrojuan was born in Spain. But the Augustinian Recollect priest went to Panama more than forty years ago and there he’s been ever since. What it is really amazing is that he is not the Archbishop of Panama City, the largest local church in this country of 3.6 million people. Instead, he is the Bishop of David, a diocese on Panama’s western border with Costa Rica. In case you’re wondering, this local church is not the country’s second most populated after the archdiocese. It’s not the third, either. It actually ranks fourth. And that, by the way, is the same number of countries that got cardinals for the first time ever at the last consistory thanks to Papa Francesco.