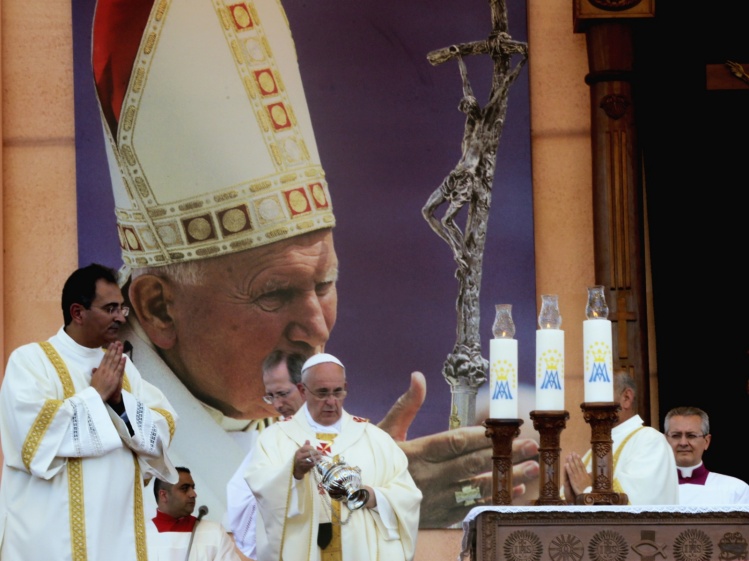 It’s taken nearly four decades, but officials at the Vatican have finally come back to their senses, at least on one issue: the papal Mass and procession on the Feast of Corpus Christi, officially called the Solemnity of the Most Holy Body and Blood of Christ.

It may seem a no-brainer, but they have actually decided that Pope Francis will celebrate it the very day that his diocese and the rest of Italy (with few exceptions) celebrate it—the Sunday after Trinity Sunday (June 18). And he’ll do at his Cathedral Basilica of St. John Lateran.

“Really, now?” you say with feigned astonishment. “What is so remarkable about that?”

Well, since 1982 the Bishop of Rome has not been celebrating Corpus Domini, as the Italians call it, on the actual day of the solemnity. He’s been celebrating it three days earlier. And, of course, it all has to do with a stubborn adherence to “small-t” tradition, something that should more properly be called “custom.”

Here’s the background. When the Feast of Corpus Christi was introduced in the Middle Ages, the date for its celebration was fixed for the Thursday after Trinity Sunday. That was to make clear its connection to the Last Supper, which is marked on Holy Thursday.

In Catholic countries in Europe and some other places around the world, the festival was also a public holiday. But as states began eliminating this and other church feasts from the official civic calendar, national bishops’ conferences began transferring these celebrations that were always held on weekdays to the nearest Sunday.

The Italian Episcopal Conference (CEI) did so with a decree on March 5, 1977. Naturally, as in other countries, not all Catholics in Italy were happy. But the rationale behind the change was that it would allow more people—specifically those who work on Thursdays—to participate in the Corpus Christi liturgy and procession by moving it to Sunday, a public holiday.

Self-defined traditionalists and others with short memories are under the illusion that the Vatican never accepted the change. But, actually, that is not the case.

On June 12, 1977—just a few months after the CEI decree—Paul VI became the first pope ever to celebrate Corpus Christi on Sunday.

Some traditionalists think the Vatican never accepted the change, but that is not the case
sharetweet

It seemed completely normal since that was the day the people of his diocese, ecclesiastical province, and nationwide church were celebrating it. The papal Mass was held at the Basilica of St. Paul’s Outside the Walls that year, and the pope said transferring the feast was to put in it in sync with the civil calendar.

“But we declare right from the start that this purely chronological change of the date…does not and must not, even in the least, signify a diminishing of devotion to the most holy Eucharist,” he said in his homily.

Rather, he said the intention was to make its celebration more accessible to “all the faithful people.” He then urged priests to help their people observe it even more fervently.

The following year—on May 28, 1978—Pope Paul returned to St. Paul’s for only the second-ever Sunday celebration of Corpus Christi in Rome and Italy. It would be his last. Paul died a little more than two months later at the papal summer residence at Castel Gandolfo.

Paul VI was pope for fifteen consecutive Corpus Christi celebrations. Some are not aware that his predecessors rarely ever presided at Mass for the occasion (or many other times for that matter), but led processions for it in different parts of Rome.

It was John XXIII who revived the 15th century custom begun by Nicholas V that the Bishop of Rome would lead a Eucharistic procession on the feast. He did so in 1959 in the midst of the Roman Forum, the heart of ancient Rome.

Paul VI held his very first Corpus Christi procession in 1964 in the very same place. But the next year he began celebrating Mass on the feast mostly in parishes throughout the diocese. He went to St. John Lateran for Corpus Christi only three times, and that was when the solemnity was still being observed on the Thursday after Trinity Sunday.

John Paul II, who succeeded Paul in the autumn of 1978, continued to stick to the new date. On Sunday, June 17, 1979, he began the first of his many Corpus Christi celebrations at St. John Lateran. And on that day he restored Pope Nicholas’s short-lived medieval custom of leading a Eucharistic procession from the cathedral to the Basilica of St. Mary Major several city blocks away.

The now-sainted John Paul returned to the Lateran in 1980 on Corpus Christi Sunday. However, three days earlier he had already celebrated the feast at Castel Gandolfo with pilgrims from his native Poland, a country that continues to hold it on the Thursday after Trinity Sunday.

Nonetheless, it appeared that the Mass with his fellow Poles was an extraordinary event and most people, perhaps naively, did not see it has a harbinger of things to come.

There was no papal celebration of Corpus Christi the next year because John Paul was still recovering from the gunshot wounds he suffered in May 1981 from a would-be assassin. However, in 1982 the pope who eventually would be greeted with carefully orchestrated cries of “Santo Subito” upon his death reverted back to the old custom of celebrating the solemnity, as it is still observed in his homeland, on Thursday.

And thus it has remained until now.

Residents of the neighborhoods surrounding the Lateran and St. Mary Major will be happy that the Mass, and especially the early evening procession, will now be on Sunday. Corpus Christi with the pope has been like “Black Thursday” for motorists and bus passengers attempting to navigate the area only to become trapped in stopped traffic because of road closures. It was not a winning strategy for the man responsible to endear himself to the notoriously anti-clerical Romans.

The head of the Holy See Press Office, Greg Burke, did not mention that as one of the reasons why the Vatican decided to make the switch.

“The reason for moving it rests in the fact that Corpus Domini falls on a weekday,” he said. Changing the celebration to Sunday, he pointed out, is meant “to promote a greater participation of the faithful.”

It took only took them thirty-five years. But let’s give credit where credit is due—they finally got there.