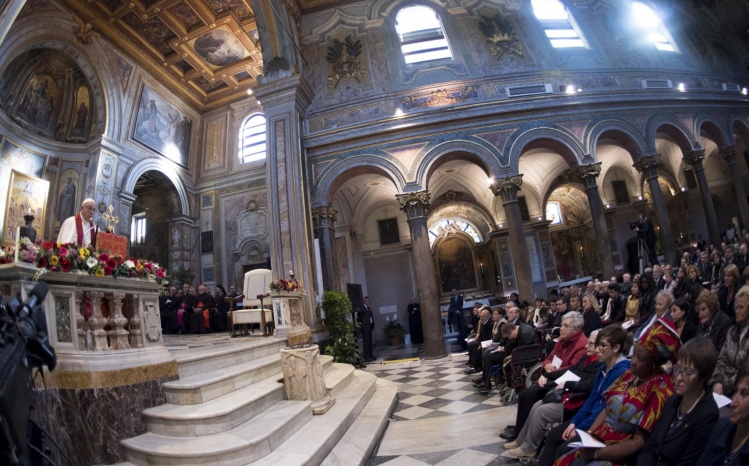 Pope Francis leads a prayer service at the Basilica of St. Bartholomew in Rome April 22, 2017. The service was in memory of Christians killed for their faith in the 20th and 21st centuries. (CNS photo/Reuters)

Pope Francis is going to be busier than ever the next couple of months and his activities are likely to have an important impact on the continued renewal of the Church and—if we’re lucky—they will stimulate brighter prospects for world peace.

At least that’s what he and his Vatican aides are hoping and praying for. And, of course, hope springs eternal in the human heart and prayer is at the very heart of being a believer.

Francis, now well into his eighty-first year, is showing no signs of slowing down. If anything, he’s moving with a greater sense of determination and urgency. He is clearly a man on a mission to revitalize and unite global Christianity while sowing seeds of peace, dialogue, and friendship around the world.

The next chapter of that mission began symbolically last Saturday afternoon when the Jesuit pope made a short trip in his now trademark blue Ford Focus to the Basilica of St. Bartholomew’s on the Isola Tiberina or Tiber Island. That’s a tiny strip of land in the Tiber River that stretches roughly the length of three football fields. If the pope had gone there by boat it would have been a little less than a mile-and-a-half downstream from the Vatican.

Tiber Island sits in the river’s murky waters like an anchored ship. Two stone bridges serve as the planks of a sea vessel. One connects the island to the river’s Eastern embankment and the original Rome (beginning with the Great Temple and the old Jewish ghetto). The other joins it to the West bank and the city’s famous quarter of Trastevere (that is, “beyond the Tiber”).

The island has long been associated with healing. In fact, St. Bartholomew’s, originally build in the late tenth century, sits on what was once a temple dedicated in 289 B.C. to the ancient Greek god of medicine, Asclepius. Across from the church is a fifteenth-century hospital run by Brothers of St. John of God (the Fatebenefratelli), while next to it is a more recently founded Jewish clinic.

St. Bartholomew’s has been under the care of the Sant’Egidio Community since 1993, at which point the lay-run ecclesial movement transformed it into a rallying point for promoting better Jewish-Catholic relations, especially in the Eternal City and Italy.

At that same time Sant’Egidio used the basilica as a center for its work in ecumenical dialogue and cooperation, especially with the Orthodox churches of the East for which the Apostle Bartholomew remains an important figure. A number of leaders from the Orthodox and even Reform churches have attended conferences and joint prayer services that the community has sponsored here. They include the Ecumenical Patriarch of Constantinople, Bartholomew I, and the former Archbishop of Canterbury, Rowan Williams.

The pope will need all the help he can get in the coming weeks.
sharetweet

The most significant recent development for the Basilica of St. Bartholomew happened in 2002 when John Paul II designated the church as a place of memorial for the “new martyrs” of the twentieth century. That distinction has since been expanded to include martyrs and “witnesses of the faith” in our own twenty-first century.

The memory of a number of famous Christians of all denominations is kept at this “shrine.” They include Martin Luther King Jr. of the United States; Archbishop (and now Blessed) Oscar Romero of El Salvador; the German Protestant theologian and pastor, Dietrich Bonhoeffer; and Cardinal Juan Jesús Posadas Ocampo of Mexico.

But there are also numerous ordinary and even anonymous Christians who—as Sant’Egidio says—“in situations of extreme danger, chose solidarity, charity and friendship, and paid with their lives.”

Many were persecuted for their faith and died under the totalitarian regimes of the Nazi and Soviet eras. The victims of the Armenian genocide during World War I are also memorialized here, as are the seven Anglican members of the Melanesian Brotherhood who were martyred 2003 in the Salomon Islands.

Relics of many of these “new martyrs” are preserved and venerated in the several small chapels that line the inner walls of St. Bartholomew’s.

Given Tiber Island’s ancient connection to healing and the basilica’s more recent significance for ecumenical witness and encounter, it is greatly symbolic that Pope Francis has begun the next stage of his mission in this place.

After all, this is the pope who has likened the Church to a “field hospital after battle” and has risked losing face to meet and reach out to other Christian leaders like the head of the Russian Orthodox Church or tele-evangelists in the United States. The former heads a community that has long seen the Church of Rome as a rival, while some in the latter see the Roman Church as the “whore of Babylon.”

But Francis is undeterred. In a disarmingly non-ideological way, he has sought to unite the voice and actions of all Christian communities, even despite their huge theological, liturgical and organizational differences. Ironically, this has raised fear and suspicion mostly among self-defined “traditionalist” Catholics. But the pope unflinchingly and doggedly moves ahead.

The prayer service on Tiber Island at St. Bartholomew’s might rightly be seen as a way of drawing inspiration from the new martyrs and making recourse to their intercession in this mission. The pope will need all the help he can get in the coming weeks.

That is especially true for his visit at the end of next week (April 28-29) to Cairo where Islamic terrorists recently bombed Coptic Christian churches, killing scores of worshipers. Francis will meet with the Copts’ Pope Tawadros II. And he’ll be joined by Bartholomew I at an international peace conference called by Sheik Ahmad el-Tayeb, grand imam of al-Azhar University and the top Muslim faith leader in Egypt.

Pope Francis’s next big event will be just two weeks later when he makes a May 12-13 visit to the Shrine of Our Lady of Fatima in Portugal. There he will canonize two of the shepherd children who witnessed the alleged apparitions of the Virgin Mary. And he’s likely to give fresh insights into Marian piety and the practical, “fleshy” significance that such piety can and should have for today’s believers.

Two weeks after returning from Fatima the pope will make a daylong visit on May 27 to the northern Italian port city of Genoa. Oddly, the trip to the archdiocese is not found on the Vatican’s website among its list of upcoming papal visits, even though one can find the full program of Francis’s visit to Bologna—which doesn’t take place until next October.

The Genoa visit will mark an important turning point in the life of the Church in Italy and its episcopal leadership. Just days before it takes place the pope will have named a new president of Italian bishops’ conference to replace its outgoing head, Cardinal Angelo Bagnasco, who also just happens to be the Archbishop of Genoa. The cardinal, who has not been the most enthusiastic or vocal supporter of Francis, is drawing close to retirement age. And the papal visit to the archdiocese will be Bagnasco’s gold watch ceremony even though it comes several months before his seventy-fifth birthday in January.

When Pope Francis is in Genoa the U.S. president will be in Sicily to attend the latest summit of the G7 democratic nations that rank as the major industrial economies. Will Donald Trump come to Rome to meet the pope? The Trump team had insisted earlier that it would be too difficult to work out the logistics since the president is in Brussels for a NATO meeting on the 25th and must be back to Washington on the 29th to fulfill presidential duties on Memorial Day. His aides say it is not possible for him and his huge security detail to spend an extra night in Rome.

But now the president’s spokesman is piping a different tune.

“We will be reaching out to the Vatican to see if an audience with the pope can be accommodated,” White House spokesman Sean Spicer said this week. “We would be honored to have an audience with his holiness,” he added.

If the Donald really wants to meet Francis he will find a way to do so. But such a meeting would be the riskiest encounter of his fledgling presidency. The Holy See will not allow Trump to fabricate details of a private papal audience to his advantage, something the president has been known on other occasions with other people.

Meanwhile, the next big event on the pope’s calendar is on June 29, Rome’s patronal feast of Saints Peter & Paul. This also is traditionally the end of the ecclesiastical year, at least for the Roman Curia. Or it used to be. As everyone knows Francis doesn’t go on summer holiday, so many at the Vatican have to stick around town as well.

There’s an odd omission on the pope’s June calendar, however. He is not scheduled to lead the customary Sunday Angelus on the 25th of that month. This may only be a typo. But it could also mean Francis is eyeing another foreign trip that has not yet been announced. And that could be anywhere, such as Iraq or even Syria. Both have been suggested.

If it’s in the works, the pope may discuss it next week with his nine cardinal advisors (C9) when he meets with them from Monday-Wednesday for their nineteenth round of meetings. This tiny group is the main body through which Francis is discerning how to reform the Roman Curia and fulfill his task of guiding the universal Church.

He often informs this group of men of new initiatives before anyone else. He could broach the subject of a foreign trip in June or something else that is in the offing. Recall that he shared with them his plan to hold the first consistory of his pontificate months before he formally announced the names of the new cardinals. Perhaps in this latest round he’ll announce plans for a consistory on the Feast of Saints Peter & Paul, as some have been speculating.

But if Francis does so, he will have to expand the number of cardinal-electors beyond its current ceiling of 120 because there are currently only a few slots vacant. He could do increase the number of electors through a temporary derogation of the norm (as John Paul II did several times) or he could juridically re-set it.

Either way, these next busy and important papal events all got underway last Saturday on Tiber Island, fittingly under the inspiration of the new martyrs and witnesses of the faith.