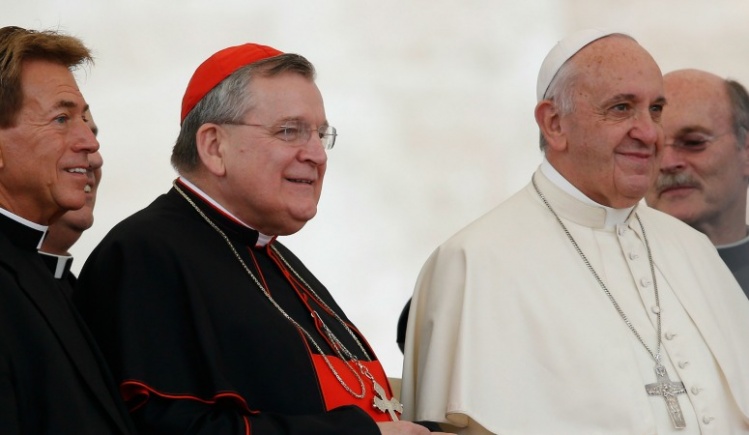 What is Pope Francis going to do with Cardinal Raymond Burke?

The 68-year-old American has become the most prominent figure in a small, but well-organized and well-funded campaign that has fomented opposition to the pope’s reforms.

And now Francis has recently, de facto, stripped the cardinal from duties as his personal representative to the Sovereign Military Order of Malta. This was after Burke misrepresented the pope while colluding with the Order’s former Grand Master in a power shake-up within the organization.

Francis stepped in and effectively forced the Grand Master, Matthew Festing, to resign. Then he reinstated the official that Festing (with Burke’s assistance) had kicked out—the Order’s foreign and interior minister, Albrecht von Boeselager.

In addition to that—and this is where the cardinal’s fate now hangs in the balance—the pope announced he would appoint a special “papal delegate” to the Knights. The new man—the Vatican’s Deputy-Secretary of State, Archbishop Angelo Becciu—will essentially take over Burke’s duties. He will lead a spiritual renewal of the Order over the next few months until the time its members elect Festing’s successor.

Burke has served as the cardinalis patronus of the eleventh-century “lay religious order” since November 2014. And, for now at least, he still holds that title.

According to the Knights’ constitution, the cardinal patron is the pope’s “representative” and “has the task of promoting the spiritual interests of the Order and its members and relations between the Holy See and the Order” (art. 4, par. 4).

But Archbishop Becciu, the papal delegate, now assumes these duties.

Where, then, does that leave Raymond Leo Burke?

Will he fully resume the task properly ascribed to the cardinal patron once the papal delegate completes his assignment and the Order of Malta elects its new leader? Or will the pope remove Burke all together?

What are Francis’s options for dealing with a trouble-making cardinal?

He could do nothing, of course. Just leave the man where he is. And many think that is the wisest course of action, since any sort of punitive measure (such as removal, a transfer, or forced retirement) would only make Burke a “martyr” for the papal opposition’s cause.

But if the pope were to reject that line of reasoning he has other options—some more severe than others.

A very unlikely one is to remove Burke from the College of Cardinals, though it has happened before. One might be surprised to see just how many cardinals have been deposed throughout history or who voluntarily surrendered their red hat.

But the last time a pope actually removed someone from the College seems to have in the eighteenth century. And the most recent case of a resignation was that of Louis Billot, a French Jesuit theologian who resigned the cardinalate in 1927 after a stormy dispute with Pius XI over the cardinal’s promotion of the conservative movement, Action Française.

However, two cardinals even more recently were stripped of their rights and privileges (including to vote in a conclave) because abusive homosexual behavior. The first was Hans Herman Groer of Austria in 1998. The second was Keith Patrick O’Brien of Scotland. He agreed not to come to the conclave of 2013 and then, two years later, Pope Francis formally took away all his privileges. However, odd as it may seem, both Groer and O’Brien were allowed to keep the title of cardinal.

It does not seem that Francis would punish Cardinal Burke by removing his privileges or taking away his red hat. It’s unthinkable especially when the man who created Burke a cardinal in the first place—Benedict XVI—is still alive. Francis has tried to show sensitivity to Benedict’s past decisions, even though he has sometimes broken course with them. So, it is hardly plausible that he would take any drastic action against Burke without consultation with his retired predecessor.

Another possible (but, still rather unlikely) option would be to force the Wisconsin native into early retirement. Some might see that, itself, as punitive since Burke is still more than six years away from turning seventy-five. That’s the normal age when cardinals “who preside over the dicasteries and other permanent institutions of the Roman Curia and Vatican City… are requested to tender their resignation from office to the Roman Pontiff” (Can. 354).

But here’s the rub. Cardinal Burke currently holds no such portfolio.

In fact, Francis already effectively “retired” the cardinal back in November 2014 by removing him as head of the Holy See’s highest court, the Apostolic Signature, and naming him cardinalis patronus of the Order of Malta. The Order is not a curia or Vatican institution. The only official curial posts Burke holds are membership of just a couple of Vatican offices, such as the Pontifical Council for Legislative Texts and the Congregation for Saints.

Perhaps there is yet another possibility for the pope in dealing with Cardinal Burke.

There have been reports in the past several days that the Vatican is moving closer to rehabilitating the Priestly Society of St Pius X (SSPX), the schismatic ultra-traditionalist group founded by the late-Archbishop Marcel Lefebvre.

The idea is that it would eventually be made into a personal prelature, that strange canonical creature that was invented for Opus Dei during John Paul II’s pontificate.

In exchange, the SSPX would likely have to agree to stop criticizing the church reforms and changes (including the liturgy) that came during and after the Second Vatican Council (1962-1965).

Then the Lefebvrists would become similar to other smaller, more disparate groups of Neo-Tridentinist Catholics (that are in communion with Rome). These are the ones a certain German theologian-pope helped spawn these past several decades. Their members formally profess acceptance of Vatican II, but then continue their retrodox way of church life as if the Council never happened.

If Pope Francis were to put all such groups under one personal prelature, it would be interesting to see how quickly it started tearing itself apart and hemorrhaging members. (Think of what’s happened in the Anglican Ordinariate.)

But Francis could also go one step further than his saintly Polish predecessor and add another rung of episcopal authority to this curious ecclesiastical structure.

He could call it a cardinalis patronus or whatever else he wants.

At any rate, he’s already found a good candidate for the job—Cardinal Raymond Burke.

One of the best ways to get an insider’s view of the thinking and priorities of the pope and the Vatican is to read La Civiltà Cattolica (LCC).

The journal was founded 167 years ago by a group of Italian Jesuits who subsequently developed a tight editorial relationship with the Holy See’s Secretariat of State. In the course of this century and a half this Vatican office began reviewing the twice-monthly journal, each issue of which runs to roughly a hundred pages.

This has given LCC the stamp of quasi-officialdom and has allowed its Jesuit editors to push the limits on issues in a way that the Vatican itself could or would not do officially.

But La Civiltà, as professional church people in Rome commonly refer to it, is not concerned only with ecclesial matters. Quite the contrary.

“Since 1850 we’ve been writing about culture, theology, philosophy, history, sociology, economics, politics, science, literature, the arts and cinema,” it says on LCC website.

But that is about to change. In the coming days La Civiltà Cattolica will officially launch a monthly edition of its prestigious journal in English. It will be published by the Union of Catholic Asian News (UCAN).

LCC quietly rolled out a French language edition a couple of months ago. And it will also begin printing monthly issues in Spanish and Korean.

The expansion into these other languages can be credited to the journal’s current editor-in-chief, Fr. Antonio Spadaro, SJ.

When the now fifty-year-old Sicilian took over the reins of La Civiltà in September 2011 the journal was notoriously seen as a staid and unattractive mass of ink and paper. But Fr Spadaro, who is a multi-media and cyberspace force of nature, began making significant changes.

The most important was to bring this venerable old review into the digital age and onto the Internet where so many people now navigate for their news and information.

Beginning in 2013 La Civiltà Cattolica began to put its footprint on every conceivable area and forum of social networking. Its webpage began offering extensive excerpts and even entire texts of important articles. Then it started, on occasion, to translate some of these into English, French and other languages. And it was not long before it delved into Facebook, Twitter and Instagram.

Now, finally, there will be full editions in other languages.

That is really good news. Because while the Secretariat of State has always played a discreet role in reviewing LCC’s work in the past, it appears that now Pope Francis is also involved in vetting some of the key articles.

And it’s no wonder. Francis has forged a close working relationship with Fr. Spadaro, who has become his key media and information person.  The pope consults with him a near daily basis. In fact, many Vatican observers see the Jesuit priest as the pope’s unofficial spokesman. He’s definitely the man in the know.

Without a doubt, the Jesuit journal under Spadaro’s helm has become an invaluable instrument for correctly reading the tealeaves in today’s Vatican and for better understanding Pope Francis.

That’s a gift that will now be extended to the English-speaking world.