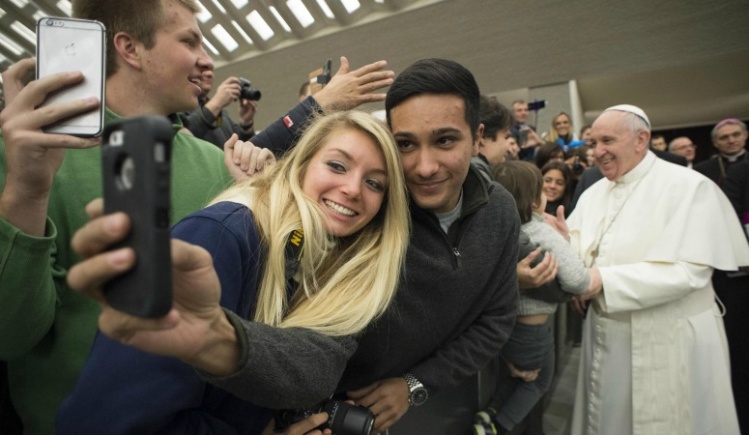 In an unprecedented move, the Vatican has decided to by-pass national episcopal conferences and give the world’s young people a unique opportunity to help set the agenda for the next major meeting of the church’s international Synod of Bishops.

Cardinal Lorenzo Baldisseri, head of the Rome-based secretariat that coordinates the Synod’s activities, told journalists on Friday that his office was launching a website in March that will allow youngsters to honestly raise questions and share their views about life and faith inside the Catholic church.

He said their input—in addition to a questionnaire sent to bishops and heads of religious orders—would then form a substantial part of the working document (instrumentum laboris) that will frame the discussions when Pope Francis convenes the XV General Assembly of the Synod in October 2018 around the topic, “Young People, the Faith and Vocational Discernment”.

“The church has decided to examine herself on how she can lead young people to recognize and accept the call to the fullness of life and love, and to ask young people to help her in identifying the most effective ways to announce the Good News today,” says the preparatory text that the cardinal’s office has sent to the church’s bishops and heads of religious orders.”

Giving such a prominent voice to the young people themselves (which the Vatican identifies as between ages sixteen and twenty-nine) could open up a can of worms. In fact, the internet initiative has the potential of soliciting a whole range of opinions and criticism that the church’s pastors may not want or be prepared to hear.

But, no doubt, that’s what the pope wants. And he may see the younger generation as a resource and ally in bringing change to a church that too often seems stuck in stale formulas from a bygone period that no longer have meaning for contemporary people.

Francis already took a stab at including the views of ordinary Catholics in the Synod gatherings of 2014 and 2015, which discussed all manner of issues regarding marriage and the family. Many people were caught off guard when he ordered Cardinal Baldisseri’s office to draw up a questionnaire to “take the pulse” of the people. This was sent to bishops’ conferences around the world, which were than left to decide how and to what extent they would directly involve the lay faithful.

A fairly large number of these conferences seem to have involved them only marginally, drawing answers from committees or from the testimony of their priests and bishops. However, some conferences, like that of England and Wales, put the questionnaire on their web site and allowed for anyone to share his/her views.

Nonetheless, the responses were filtered through the bishops. This time the responses will be made directly to the Synod secretariat’s website. The bishops will have no opportunity to vet them.

Not all is rosy, however.

For example, the site’s URL is to be www.sinodogiovani2018.va. And so far, there is no indication that URLs in other languages will be set up to link to the Italian-named address.

It is not a minor point.

“We need to modify our language,” Cardinal Baldisseri admitted on Friday.

“We will do this with the help of young people,” he promised.

It is now up to the young people themselves. Like no other time before, they have been given a voice in a major church affair. We must encourage them to use it. And use it boldy.

The world becomes a much more unpredictable place next Friday when Donald Trump is officially sworn in as the forty-fifth President of the United States.

What will that mean for U.S. relations with the Holy See? Like just about everything else at the dawn of “Trumpistan,” it’s anyone’s guess.

“The Donald” cast himself as a friend and defender of Catholics during the presidential campaign, albeit late in the game. Near the end of September—less than two months before voters went to the polls—he announced the establishment of a thirty-four-member Catholic Advisory Group, which included a number of well-known ultra-conservatives.

Many of the group’s members, including most of the seven women, were “pro-lifers” of various degrees of prominence. And, it seems, that the soon-to-be-inaugurated President’s unbelievable eleventh hour conversion to their anti-abortion movement was a main reason why some 52% of Catholic voters (evidently tossing reason aside) voted for him.

They really believe the new president will make good on the false promises his Republican predecessors in the White House (notably, Ronald Reagan and two men named George Bush) used cynically to capture the pro-life vote; namely, that he’ll appoint Supreme Court Justices that will repeal Roe vs. Wade, the 1973 court case that made abortion legal throughout the United States.

Catholics should also remember that Trump threw a juvenile temper tantrum (via Twitter, naturally) when Pope Francis denounced his promise to build a wall along the U.S.-Mexican border. The pope said the proposal was un-Christian.

So how will Trump, now that he’s president, conduct his country’s relations with the Francis-led Vatican?

Much will depend, of course, on the person he chooses to be his ambassador to the Holy See.

The man who has represented President Obama the past four years—Ambassador Kenneth Hackett—has already submitted his resignation and will have vacated his post before Trump’s inauguration next Friday.

But Hackett’s successor is not likely to arrive in Rome anytime soon—probably not much earlier than immediately before Christmas. That’s because the nominee has to be vetted by a committee of U.S. Senators, like all ambassadors and presidential cabinet appointees.

Up until now, U.S. Ambassadors to the Holy See have always been political appointees. That is, they have not come from the ranks of the U.S. diplomatic service. And that is not likely to change under Trump, of all people, who has been nominating the most unlikely (and many would say unqualified) people to hold high positions in his administration.

For example, he’s tapped wealthy men from the private sector (or even Congress) to head departments the very purpose of which they oppose. It’s hard to imagine he would pick someone with a critical view of the church or who is hostile to Pope Francis to be ambassador to the Vatican. After all, the Holy See’s Secretariat of State has the right to refuse another country’s envoy.

But, then again, Trump has been a wild card up to now and shows no signs of changing that.

Just before Christmas the New York Times noted that Rudy Giuliani, the former mayor of New York and a staunch Trump supporter, has been lobbying hard for Bill Simon to be named to the post.

Simon is son of the late multi-millionaire businessman and former Treasury Secretary under Richard Nixon. The sixty-five-year-old New Jersey-born politician and merchant bank director ran unsuccessfully to be Governor of California in 2002. He is also a Knight of Malta and very involved in philanthropic work and the revitalization of Catholic parishes.

The Times also cited another New Jersey native and real estate developer as a prime candidate for ambassador to the Vatican. He’s Joseph M. Forgione, head of the JMF Properties. His parents were actually born in Italy and he apparently holds dual citizenship.

But the latest word is that Trump is also looking at a female candidate. No names have been mentioned, but one of the most prominent women among his thirty-four Catholic advisors is Faith Whittlesey.

The seventy-seven-year-old is yet another New Jersey native who worked in the Reagan Administration and served two separate terms as Ambassador to Switzerland. She only became a Catholic in 2000, but she has been a fervent one.

Of course, it is likely that none of these three people will be get the Vatican post. After all, nothing is what it seems from the lofty heights of Trump Tower.

Speaking of the Knights of Malta…

The sixty-eight-year-old Wisconsin native and “apostle of the indissolubility of holy matrimony” just can’t help himself.

Of course, he is most famous right now for publicly challenging the pope’s (and the Synod of Bishops’) views on certain moral, sacramental and disciplinary issues related to marriage, divorce and sexual acts.

But, in fact, the former Archbishop of St. Louis—a leading Tridentine Mass devotee who was made a cardinal by Benedict XVI—has had his long red train (capa magna) in a knot from the moment Francis made his first appearance as Bishop of Rome.

Several months into his pontificate the pope made it clear he wanted to reform the church’s annulment process. But Cardinal Burke adamantly opposed the idea and in November 2014 Francis removed him from his former job as head of the church’s “supreme court” and sidelined him to his current position.

As “patron” his post is mainly ceremonial. The only significant contribution he’s called to make to the Order of Malta is one of spiritual or pastoral “accompaniment,” a notion he has derided as having “no classical theological or doctrinal meaning.”

In a sense, the cardinal is also supposed to represent the Holy See and the pope to the Knights of Malta.

And it now appears that he has failed terribly in this task and has thus caused a huge crisis with the Order of Malta and between it and the Vatican.

It pertains to the key role he reportedly played in the firing of the Order’s chancellor, Albrecht von Boeselager, over a condom-distributing dispute from several years ago.

It boils down to this: he and the Grand Master of the Knights, Matthew Festing, held a meeting with Boeselager and demanded that he resign. When the chancellor refused, Festing told him this was the express will of Pope Francis.

But according to Italian journalist Andrea Tornielli, the pope had written the Grand Master earlier telling him the exact opposite and urging dialogue.

A Vatican commission is currently trying to get to the bottom of the matter to see if Matthew Festing really did quote the pope to oust the chancellor.

If the commission ascertains that he did, then the Grand Master told a lie in the name of Bishop of Rome. And Cardinal Burke, by his silence, is an accomplice in that lie.

If this is, in fact, what happened, then Pope Francis will have no other choice than to remove both men.