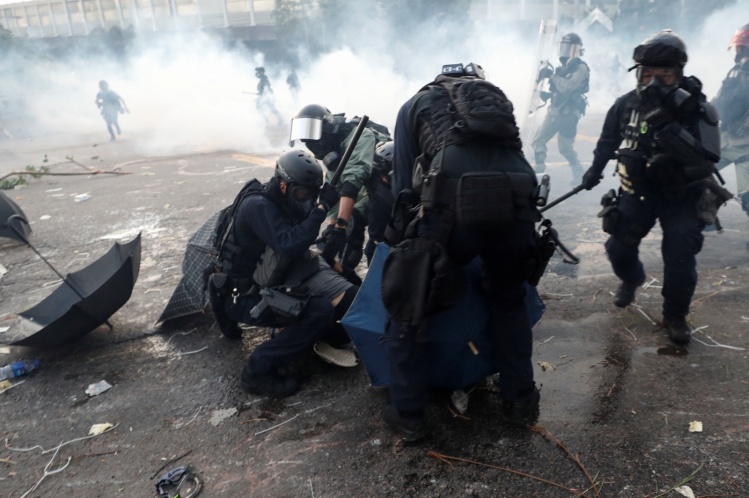 I arrived in Hong Kong on a Friday in mid-September, the sixteenth weekend of protests against a proposed bill in the Hong Kong Legislative Council to amend its extradition laws with China. As I live in Taiwan, a little more than an hour away by plane, I had sent a message to a friend involved in the Hong Kong Federation of Catholic Students, the main university-level Catholic student organization in the city, to see if a visit would be possible. This led to an invitation to attend the organization’s school-year convocation Mass and an opportunity to observe the city and the movement.

The Mass was not entirely insulated from the political crisis; the students’ broad support for the protests was obvious. They told me that the Catholic diocese had issued a notice prohibiting the performance of “Glory to Hong Kong,” an anthem musically resembling “The Internationale”—a rare example of a song written for a political movement that has currency among its participants. The sixty or seventy students in attendance nevertheless sang a moving rendition at the conclusion of the Mass. The organist then played an encore as the students gathered at the front of the church for a photograph behind a banner reading: “Struggle for democratic righteousness, build the Kingdom of Heaven on earth.”

Afterward, in the federation’s office beside the church, there was a casual banquet. The mood was one of joyful camaraderie, despite the seriousness with which the students spoke of their support for the protests, which was couched in terms of opposition to the influence of the People’s Republic of China on Hong Kong life. The students and priests I spoke with emphasized the splits in opinion among Catholics—particularly along generational lines—regarding the protests. It shouldn’t be forgotten, they added, that Carrie Lam, the chief executive of Hong Kong who is widely seen as pro-Beijing, is also Catholic.

The room, some combination of library and lounge and garnished with all the talismans of a Catholic school, was crowded with boxes of respirators, hard hats, and other protest gear, which the students were invited to take as needed. Both in the singing of “Glory to Hong Kong” and in the distribution of protest equipment, the students had the protection of the celebrant of the Mass, Cardinal Joseph Zen, the retired bishop of Hong Kong.

I made my way to the frontlines, and within about ten minutes police fired tear gas into the crowd.
sharetweet

On Saturday afternoon, a federation member led me to a bus that would take me to Tuen Mun, the location of a planned pro-government counter-demonstration that would be met by protesters. Tuen Mun—a section of Hong Kong that is geographically remote from the island, in the furthest western reaches of the city, near the border with Shenzhen—has become a contested territory in its own right. As a center of mainland immigration to Hong Kong, it is feared by some as a potential beachhead in the “mainlandization” of the city. It has been the site of three clashes between pro-government sympathizers seeking to strengthen ties with recent mainland arrivals, and anti-government protesters looking to show force in what might be considered “opposition turf.” There is marked worry among protesters, however, that in singling out Tuen Mun, the movement risks morphing from one of political resistance into national chauvinism.

The calm ride along the bay on the upper level of the red double-decker bus came to an abrupt end at a protester barricade near the Tuen Mun municipal office. It was clear when I stepped off the bus that I was deep in a protester-occupied area. Black-clad demonstrators in groups of about ten pried bricks from the sidewalk to use in building barricades. Comrades holding up umbrellas—defense against security cameras—surrounded them. Medics and journalists hustled around busily. There was a spirit of tacit coordination and organization that resembled nothing so much as a disciplined military preparation behind a makeshift front.

I made my way to the frontlines, and within about ten minutes police fired tear gas into the crowd. Almost everyone had a mask of some kind, but the frontline wasn’t defended very long; the protesters called a massive and sudden retreat, and I sprinted back with them until I found an alcove opening into a shopping mall along the street. The point seemed to be to hold a line until it was too dangerous to do so, and force the police into a guerilla-like campaign of attrition. From my position in the alcove, I could blend in with the journalists reporting on arrests and observe what might happen when the police came through. I noticed immediately that there were police infiltrators dressed as protesters, in black t-shirts, who stayed behind and chatted casually with uniformed police. There was a British commander at the head of the battalion of Hong Kong police who were pursuing the retreating protesters. The police were outfitted in full military gear.

I decided to make my way back to Mong Kok, where I was staying, but the government had shut down all public transportation. To walk it would have taken nearly seven hours. I walked to a nearby restaurant, hoping to sit and come up with a plan, but employees guarding the doors prevented anyone from entering. A man with a scholarly bearing, maybe in his mid-fifties, was among those turned away. He could tell by my black shirt and gear that I was with the protesters. After some small talk, I found out that he was a scientist and civil servant in Hong Kong sympathetic to the demonstrations, and was there to shuttle family and friends back and forth. I explained that I had come to observe and maybe write something. He offered to take me back, and that evening he hosted me and the other protesters for dinner.

The degree to which Hong Kong has become a police state was made clear on my trip back to the airport on Sunday morning. My bus was stopped, near Hong Kong Disneyland, and two police officers searched up and down the aisles, apparently looking for protesters. Members of the media waited outside the bus to report on arrests. I still had my respirator with me, as there were rumors of renewed demonstrations at the airport. The police officers on the bus left without interrogating any passengers; the rumored airport protests would not come to pass.