'The Leftovers' on HBO 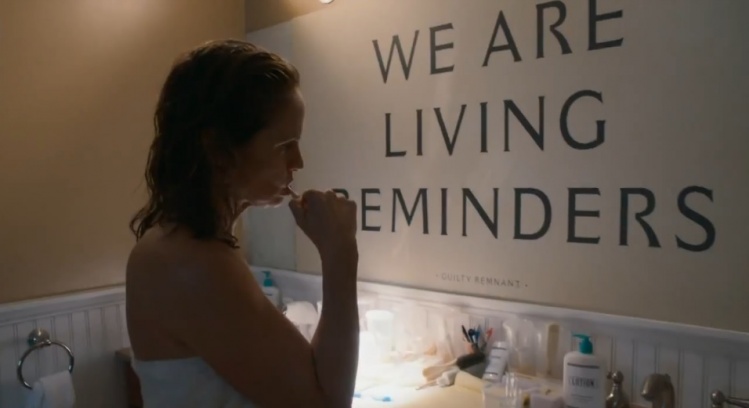 A terrible mystery has shattered assumptions, and the world will never be the same. That’s the reality confronted by the characters in The Leftovers, HBO’s brooding alternate-reality fable (premiering June 29). Based on the bestselling novel by Tom Perrotta, who co-created the show with Damon Lindelof (Lost), this intriguing, powerfully acted and gloomy new series imagines the aftermath of a devastatingly cryptic development: 2 percent of the world’s population has abruptly vanished, and no one knows why or how.

The first episode, written by Lindelof and Perrotta, picks up the story three years after the “Sudden Departure,” as the occurrence has been nicknamed, Kevin Garvey (Justin Theroux), the chief of police in the suburban town of Mapleton, New York, is still struggling to come to terms with its ramifications. So are Mapleton’s other residents, including Kevin’s resentful teenage daughter Jill (Margaret Qualley) and the Rev. Matt Jamison (Christopher Eccleston), the local Episcopal priest. Some of the community’s concerns are practical: Should people dispose of the belongings of family members who have disappeared? And what to do about all the pet dogs who have, unnervingly, gone feral since the momentous day?

Broader existential and spiritual concerns abound, too. The Sudden Departure resembles the Rapture—except that the people who have vanished do not seem to have been, in most cases, the spiritually elite. Innocent babies have gone missing, as has the pope; but murderers, rapists, corrupt officials and other seemingly sinful types have too. So, in addition to mourning lost loved ones and striving for closure, the people who remain on earth after the Departure—the “leftovers”—have to decide whether traditional beliefs, and perhaps even conventional categories of good and evil, can still stand.

Somber in tone and threaded with eeriness—if several early episodes released to reviewers are anything to go by—The Leftovers thoughtfully and ingeniously speculates on the sociological fallout that would follow from a single, mind-bending improbability. Significant portions of the pre-Departure status quo remain intact in the Leftovers world. Pundits are still yakking on cable news. Eligible singles like Meg (Liv Tyler) continue to plan for their wedding day. There is as much bureaucracy as ever: An administrative entity has begun paying Departure benefits to survivors who can bear to answer a list of one hundred fifty questions about their vanished family members.

On the other hand, the religious landscape has altered significantly. The enigma of the Departure has prompted the birth of numerous cults, including the creepy Guilty Remnant—a group of Mapleton residents (such as the haunted-looking Laurie, played by Amy Brenneman) who wear white, chain smoke, refuse to speak, and stalk vulnerable locals they think they can recruit. Another weird faction has sprung up around a figure known as Holy Wayne (Paterson Joseph) who claims to be able to hug the pain out of people.

Traditional religions, by contrast, do not seem to be doing so well. Attendance has plummeted at Rev. Jamison’s church—at one point we see him preaching to a congregation of about seven—and in the resultant financial crisis, the building has gone into foreclosure. Of course, it hasn’t helped that Jamison has become obsessed with uncovering the misdeeds of Departed individuals—a mania that infuriates many Mapleton residents. Visiting the hospital after yet another outraged survivor has assaulted the priest, Police Chief Garvey suggests that it might be better to stop tracking the crimes of the vanished. But Rev. Jamison insists that people “need to hear the truth,” because if definitions of good and evil become blurred, then “all of our suffering is meaningless.”

But if the minister is convinced that the Sudden Departure was not the Rapture, he doesn’t seem sure what it was. “Do you know where my family went?” demands Nora Durst (Carrie Coon), whose husband and children evaporated on the fateful day. “It was a test,” the priest replies—seeming to imply a mysterious divine plan. But his voice sounds uncertain.

The Leftovers dwells unflinchingly on the anguish of Durst, Garvey, and Jamison (whose lives have also been terribly scarred by the Departure), and other survivors, with the result that the show can be something of a downer. But it is undeniably profound. It certainly earns its resonant credit sequence, which pans over a painting depicting myriad people being torn away from their loved ones and swept into the sky. In style and color, the imagery seems to deliberately evoke the ceiling of the Sistine Chapel.