A Nun Remembers Her Most Troubled Student
By Francine Dempsey
U.S. Catholicism
The Last Word
Women in the Church 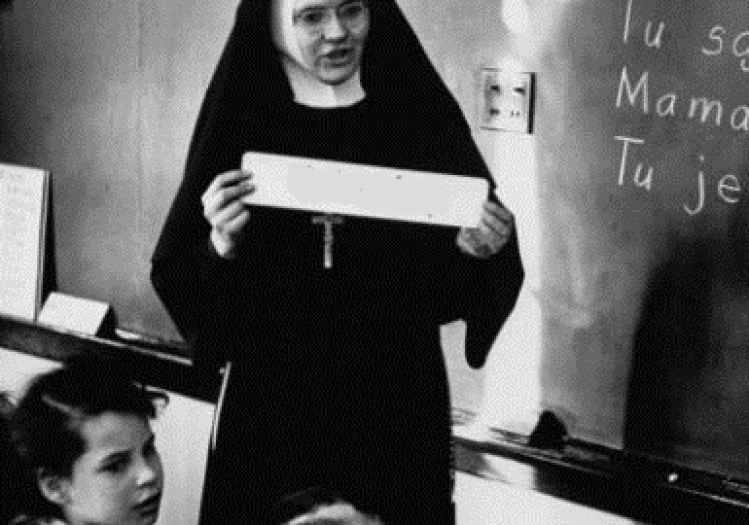 Sexual sin was an important topic in Catholic schools of the 1960s. I assume that is why, at the inner-city grade school to which I was sent as a brand-new nun, the eighth-grade girls were in one classroom and the eighth-grade boys in another: the divide-and-conquer sex-education system.

Strangely, the sin of violence was never discussed.

I was assigned to teach science and geography to the eighth graders, none of whom cared about archipelagoes or whether they always saw the same side of the moon at night.

Five-foot-seven, I was dressed in a rigid, white, starched headpiece and deep-black flowing robes. I was called by the strong name of Sr. John Constance. The eighth-grade boys were not fooled. I was a feather they blew every which way they chose.

I was schooled in prayer. I meditated for an hour before school and after. I prayed the rosary. I kept long silences. I fasted. I was obedient. I was in my assigned classes on time every day, without exception. I spent hours late into the night in my small convent room preparing the next day’s lessons, and praying that I would get through the next day without breaking down in tears, or bolting.

Edward was a tall thirteen-year-old, a blond, crew-cut, blue-eyed, tough, totally self-confident adolescent who wore a smirk on his face. His blue uniform trousers were worn, faded hand-me-downs from his two older brothers. His white shirts were all gray and too tight to button at the top. His regulation blue tie usually hung loose. His man-sized shoes were scuffed, unpolished, the soles worn, uneven. From the first day he was the unofficial torturer in charge of breaking me down.

When I wrote on the blackboard, my back to the class, aluminum-foil balls whizzed past my veiled head. Edward.

I explained the lessons in their yellow science books as if I had an audience listening, passed out with shaking hands the maps I had mimeographed early that morning. I collected the homework from the few who bothered to do it, gave tests that came back to me with doodles in place of answers, and tried to stop the endless talking, joking, walking around, yelling out the windows to truant friends, the squeaking of chalk on the blackboards, the throwing of chalk at each other, the eating, the doing God knows what in the cloakroom at the back of the classroom.

All led by Edward.

When the noise class leaked out the door and down the hall to the office, Sr. Louise Marie’s footsteps came pounding along the hall to my classroom.

In charge of the school, the convent, and everyone in them, she was close to six feet tall with broad shoulders, big brown eyes, and a firm, set mouth and jaw framed in white starch. Standing in my doorway, hands on her hips with an “I dare you” posture that would have stopped the Four Horsemen of Notre Dame at the goal line, she waited. I pointed at Edward and off he would go with her. He’d return shortly, always flushed but ready to behave. I didn’t want to know where they went or what happened. But each time the period of quiet that followed seemed shorter as the school year grew longer and longer.

One April day Edward somehow ended up standing in front of my desk, facing me, as I stood between two rows of student desks, facing him. I can’t remember what put us into this battle stance, but I do remember the smirk on his face that communicated to me and the entire class: Hey, Sister. Everyone’s watchin’. Whatcha gonna do about me?

I still feel my hand striking Edward’s face. I never talk about it. I have never confessed it.

Francine Dempsey, CSJ, is a SIster of St. Joseph of Carondelet in Albany, New York.