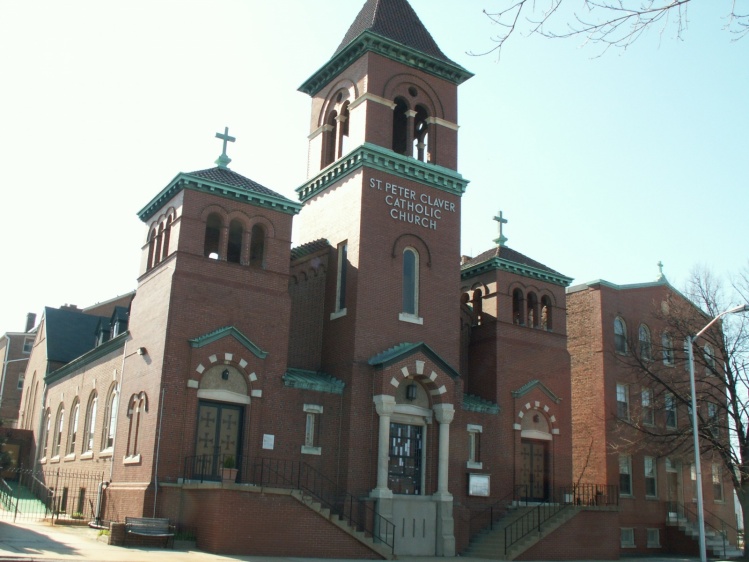 Rev. Ray Bomberger prayed after twenty-five-year-old Freddie Gray died of a severed spine, an injury he sustained while in police custody. Bomberger prayed after Gray’s funeral on April 27. And he prayed as rioters took to the streets outside his church that night, setting fires, breaking windows, and tossing rocks and bricks at police officers. Then, early Tuesday morning, he got to work.

Bomberger runs St. Peter Claver, a 126-year-old Catholic Church in Sandtown-Winchester. Sandtown, one of the most blighted areas in Baltimore, was also Freddie Gray’s neighborhood. More than 30 percent of its residents live below the federal poverty line; 21 percent are unemployed. About 450 are in state prison right now—the highest number from any census tract in Maryland. The life expectancy of those born in Sandtown is thirteen years shorter than the national average. Those are problems that can’t be fixed by one man, or in one morning. So instead, Bomberger grabbed a broom and headed across the street. The windows of Wonder Land Liquor had been smashed. Looters took what was useful (alcohol, mostly) and left the rest strewn on the sidewalk.

As Bomberger began to clean, he was joined by others. “I had to get to the church as soon as I could,” said Raymond Kelly, who leads the No Boundaries Coalition, a community-building organization in West Baltimore. “This building has always served as a sanctuary. We’re going to have to keep it that way, so that generations to come have the seed of faith planted in them.” Natalie Mercer, seventy-seven years old, came too. Mercer is a lifelong parishioner and still works down the street from the church at Penn North Recovery, a substance-abuse treatment center. She said the news of the rioting devastated her. “My heart has been heavy,” she said. “So I went to pray.”

By noon, hundreds had come together to put the neighborhood back together. When that was done, they began collecting food for needy families. Bomberger says the church excels at this kind of work—feeding the sick, sheltering the homeless. He often walks up and down Pennsylvania Avenue (Sandtown’s main drag) bringing comfort to drug addicts and the homeless. But Gray’s death has made Bomberger realize it’s not enough. How, he wondered after the protests and riots, could the church engage with the injustices that keep so many down, generation after generation? “We need to really dig into the root causes of the issues here,” he said. “There is a sense of hopelessness around so many. The church needs to be a source of hope.”

Until 2010, St. Peter Claver did that through the parish school. Opened in 1890, the school played an important role in supporting the neighborhood’s young people, helping them develop skills and self-esteem and “the strength to do good.” Now that the school is shuttered, Bomberger said, the church needs to do a better job of finding other ways to serve this mission. “We want to provide a moral education.”

That Monday Bomberger was reminded of that responsibility by Baltimore mother Toya Graham. She was filmed smacking her masked son on the head after she caught him rioting with the looters. “She said to him, ‘You know better,’” Bomberger said. “That suggested to me that he had been educated in a ‘moral sense.’ But he needed to be reminded to do better. We have to be energized to be that reminder for young people here.”

Joyful, peaceful demonstrations followed the announcement that Maryland’s state attorney was bringing charges against the six officers involved in Gray’s arrest. “That gave me a sense of hope,” said sixty-eight-year-old Luisa Toney, who has been a member of St. Peter’s for almost sixty years. “I’ve been crying, but now it’s tears of joy.” At Mass that Sunday, the church sang “We Shall Overcome.” When they reached the line “God is on our side,” the room burst into applause. Baltimore Archbishop William E. Lori stopped by to preside at the 10:45 Mass. Maryland Gov. Larry Hogan (a Catholic) sat in the front row with his wife and daughter.

“Freddie Gray’s death has brought to the surface longstanding issues of structural sin,” Lori said in his homily. “When we see that loss of life, the abandoned row houses, the lack of jobs, failing schools, drugs, insecure family situations, mistrust…we must acknowledge the right of people who see no way out to make their voices heard. We must continue to truthfully and effectively address the deep systemic problems urban neighborhoods and urban families are facing.”

It’s a tall order for the parishioners of St. Peter Claver, and for all Catholics. Can we find ways to work for justice, not just charity? The most encouraging words of all came from Sunday’s second reading, from St. John: “Children, let us love not in word or speech, but in deed and truth.” In other words: Let’s get to work.

Amanda Erickson, formerly a blogger at the Washington Post’s Web site Who Runs Gov, is currently in Azerbaijan on a Fulbright scholarship. 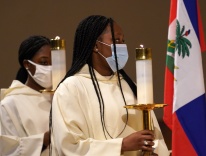